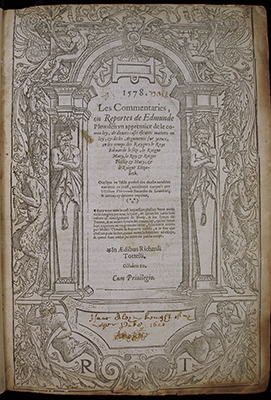 admitted to the Middle Temple, one of the Inns of Court that have trained and regulated barristers since the fourteenth century.  A devout Roman Catholic, his career began with rapid advancement in the government under Queen Mary, but after the accession of Elizabeth I in 1558, he held only minor offices and primarily returned to the practice of law. He is thought to have begun recording cases in the early 1550s, possibly to aid law sudents.  Long after Plowden’s death, he was widely regarded as a tremendously learned jurist.

Les commentaries, his most important work first appeared in 1571 (also printed by Richard Tottell). A second expanded edition, shown here, was released in 1578 and was consequently reissued many times. As a volume of law reports, the work broke with the older Year-Book tradition, and was the first collection of reports published by an author in his own lifetime and under his own name. Plowden concentrated on cases that brought up particularly problematic points in law. He did not try to report the cases verbatim, but did include a transcription of the pleadings from the court record.  Before publication he consulted with the judges and the lawyers that had worked on the case. 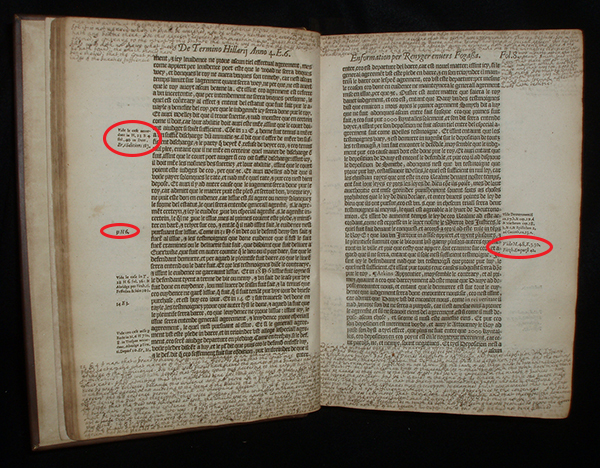 Note the marginal citations to Brooke (Br.), Fitzherbert (Fitz.) and the Year-Books.  The extensive marginal notes are an English translation of the Law-French text.  The translation only continues into the first 20 folios.