One of the Great Early Abridgements

Sir Anthony Fitzherbert (c.1470—1538) was the youngest of twelve children, and his family 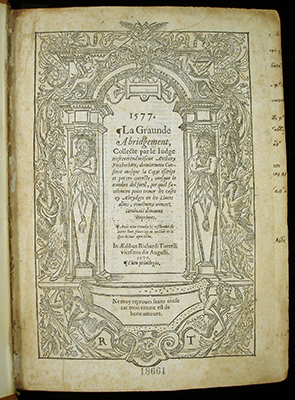 being unable to endow him with land, instead provided him with funds to pursue a legal education. He did eventually inherit the family property from one of his brothers. Fitzherbert joined Gray’s Inn, one of the Inns of Court that have trained and regulated barristers since the fourteenth century. He progressed rapidly through a number of the offices, and was eventually appointed a justice of the common pleas in 1522. He was awarded a knighthood the same year. A conservative judge, Fitzherbert generally followed precedent, and his opinions were well thought of by contemporaries.

Fitzherbert is among the most famous English legal writers of the sixteenth century. This work, La graunde abridgement, was originally issued in three parts under the title Magnum abbreviamentum (1514—1517). The massive undertaking provided a digest of over 13,000 cases from the Year-Books arranged alphabetically by topic – many of them the titles of writs.

For more information see our guide to using an abridgement.