Sources regarding the origin of the Peregrinus agree that the creature was born in Professor Simkins’ equity class around 1900, and that Russell Savage, class of 1902, 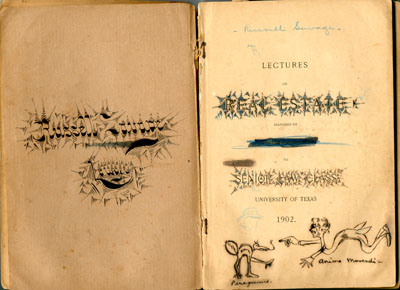 first drew the beast. The stories also agree that the term itself came from the Praetor Peregrinus, a traveling Roman law official. Beyond these points there is some disagreement. A version attributed to Professor Simkins in the 1924 book The Peregrinusings claims that the invention of the Peregrinus was merely the end result of the students’ running joke about the term “Peregrinus.” Another claims that Professor Simkins was covering Roman law in class, and called on a drowsy student to explain what a Peregrinus was. Startled, the student stated that he did not know, unless it was some kind of animal. Soon afterwards, an inspired classmate, Russell Savage, drew the first incarnation of the Law School’s "patron saint" on a chalkboard.