Evolution of the Peregrinus

Prior to being represented as a statue, the Peregrinus appeared on banners. In 1901, soon after the creation of the Peregrinus, the Junior Law class put the 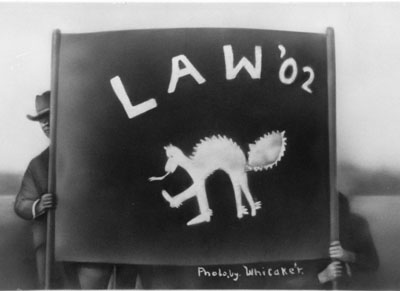 creature’s image on their class banner. That same year, a group of non-law students seized the original banner during a football game between the law students and "academes" -- candidates for the bachelor of arts or sciences -- and shredded it. Banners bearing the likeness of Perry continued to be used throughout the 1910s.

Statues of the Peregrinus were in use by the fall of 1912. Earlier that year five engineering students and one "academe" had taken the Peregrinus banner, cut it into six pieces, and sent the pieces to six different locations. The law students responded by not only making a new banner, but also by creating a statue out of paper mache. In the decades to come, several Peregrinus statues were created and destroyed. Following the destruction of the third Peregrinus by an engineering student disguised as a waiter at the annual Law Banquet in 1934, law students commissioned a Peregrinus made out of studier material—wood.

The Peregrinus currently on display in the Rare Books reading room was crafted by Peter Mansbendel, a prominent Swiss woodcarver, around 1935.

Image of the Peregrinus carved by Peter Mansbendel

Image of a papier-mâché Peregrinus circa 1948