Keeper of the Peregrinus

Although the Peregrinus now safely resides in the Archives and Special Collections Department at Tarlton Law Library, it used to be present at major Law School events. 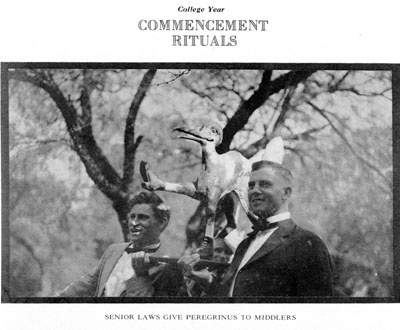 From the 1910s through 1930s, the Peregrinus was present at the annual Law Banquet. The graduating senior law students (laws) would pass him down to the junior law class at commencement. Unfortunately, these public appearances provided engineering students and others with tempting opportunities for kidnapping or destroying Perry. Therefore, the Peregrinus required a guardian, who was furnished from the ranks of the Chancellors.

At present the student inducted into the Chancellors with the fourth highest grade point average receives the honorary title “Keeper of the Peregrinus,” and serves as an officer of the society. Until the late 1950s, and for a brief period in 1965, and the early 1970s, the title came with serious responsibilities. The Keeper was charged with protecting the body and honor of the Peregrinus from defacement and theft—especially from engineering students (engineers). Traditionally, only the Keeper knew Perry’s location at any given time. While some Keepers chose to stow Perry safely in a glass case in Townes Hall or the Dean’s office, others went a step further and stashed the mascot in their apartments or closets. On rare occasions when the physical presence of the Peregrinus was necessary, such as the installment of new Chancellors, the Keeper of the Peregrinus would escort the mascot to and from the event, assuring his safety.

Description and photo of the Law Banquet from 1915 Cactus yearbook