William Wayne Justice received his law degree from the University of Texas in 1942, and served in the U.S. Army before returning to East Texas to practice law with his father, Will Justice, and serve as city attorney in Athens.  As a young lawyer, Justice joined his father in supporting progressive Democratic political candidates, including Ralph Yarborough.  The Justices were at Yarborough’s side when he announced his first (unsuccessful) campaign for Governor in 1952.  They actively supported Yarborough through his subsequent unsuccessful campaigns for that office in 1954 and 1956 and his successful campaign for the U.S. Senate in 1958. 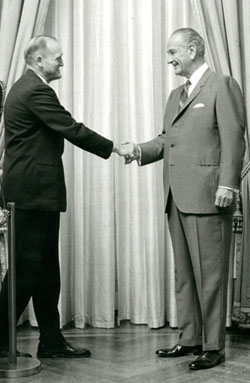 With Senator Yarborough’s support, President John F. Kennedy selected William Wayne Justice as U.S. Attorney for the Eastern District of Texas in 1961, and President Lyndon B. Johnson then appointed Justice to the federal bench in 1968 in Tyler.

The William Wayne Justice Papers include extensive correspondence between Justice and Yarborough and other documents attesting to Yarborough’s pivotal role in Justice’s early career.  The letters record the longstanding relationship between the Yarborough and Justice families, Yarborough’s very active support for Justice’s appointment as U.S. Attorney and U.S. District Judge, Justice’s gratitude to Yarborough, and the two men’s admiration and affection for each other over the years.  Selected documents related to Justice’s nomination to the bench and swearing-in ceremony provide an introduction to this portion of the collection.

Justice was sworn in as U.S. District Judge for the Eastern District of Texas in Tyler, Texas on June 29, 1968.  Senator Yarborough spoke at the ceremony.  Judge Justice’s remarks express his gratitude to President Johnson, his admiration for Senator Yarborough, and his appreciation for his parents, wife, and daughter.