At age 15, Alicia Morales was forced to work and turn her wages over to her father. When she protested, her father committed her to the Texas Youth Council for disobedience. The commitment was agreed to by her parents, but did not involve any notice of charges, court appearances, or legal representation. Alicia Morales became the lead plaintiff in a class action lawsuit filed in 1971 against Dr. James Turman, Executive Director of TYC (Morales v. Turman, Civil Action No. 1948). The case resulted in sweeping reforms to the commitment of juveniles, both in Texas and nationally. 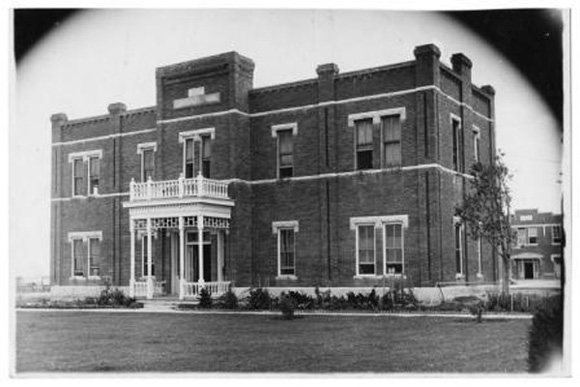 In March 1971, Judge Justice granted a request by attorneys for Morales and other inmates at TYC establishing the clients’ right to private conferences with their attorneys without supervision by TYC employees.

In July 1971, Judge Justice sent questions to all 2,500 TYC inmates asking whether the inmates had had a court hearing or attorney assistance before commitment. 2,294 inmates responded; over one-third had a hearing, but had not been represented by counsel while 280 inmates had neither a hearing nor attorney representation. Around 50 inmates also included narratives about abuses by TYC staff. The plaintiffs’ attorneys, with the assistance of University of Texas and Southern Methodist University law students, interviewed all TYC inmates in early 1972.

In December 1972, the State admitted to denial of procedural due process and consented to a declaratory judgment, detailing the rights of juveniles in Texas. Included in these rights were the right to an attorney and a provision prohibiting waiver of this right by a child or his parents. Judge Justice refrained from enforcing this judgment for 180 days, giving the Texas Legislature sufficient time to reconsider a defeated 1971 bill incorporating due process rights. The bill was enacted as Title 3 of the Texas Family Code.

Using information garnered from the 1972 interviews, the plaintiffs amended their pleading to focus on the treatment of incarcerated juveniles. Attorneys from the Mental Health Law Project, a public interest firm focused on the rights of institutionalized individuals, joined the suit, as did the Department of Justice as amicus curiae. 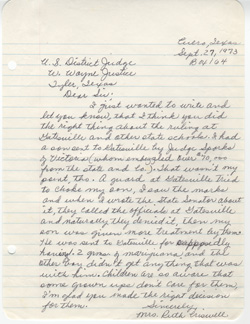 A six week trial in the summer of 1973 revealed that 60% of boys were committed for stealing, 19% for disobedience and immoral conduct, and only 9% for crimes of violence. Of girls, 68% had been committed for disobedience or immoral conduct and only 4% for crimes of violence. Inmates at the Mountain View and Gatesville facilities testified that newly committed boys suffered physical and psychological abuse from staff and other inmates. Boys were often given “make-work” assignments, or tasks with no intended purpose other than labor. Punishment was at the discretion of the staff and use of force was encouraged.

Following the trial, Judge Justice issued an order permitting reasonable physical force only for self-defense, defense of another, or to prevent escape or destruction of property. The use of corporeal punishment, mace, and tear gas was strictly limited. Further, Judge Justice required that dorms be desegregated, prohibited make-work assignments, barred segregation based on suspected sexual preference, established conditions for solitary confinement, allowed inmates to speak in other languages, prohibited censorship of mail, and increased visitation rights. Further, the order required that twenty-four-hour health care by provided to inmates and that potential TYC employees be screened to ensure psychological and psychiatric fitness.

In September 1973, almost immediately following Judge Justice’s order, rioting began at the Gatesville and Mountain View facilities. Executive Director Turman and other TYC officials blamed Judge Justice’s prohibitions, while others cited misunderstanding by guards and TYC officials as to what controls were permitted under the order. 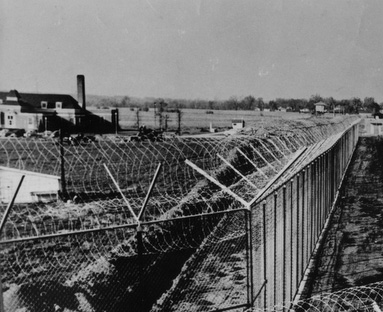 Judge Justice’s 1974 memorandum opinion incorporated his earlier emergency interim order of 1973 delineating when use of force was proper. Further, citing numerous instances of abuse at Gatesville and Mountain View (pictured below), Judge Justice ordered that those two facilities be closed and the children placed in youth homes, foster homes, day care programs, and other community-based alternatives. The order also required TYC to hire more qualified staff, curtail the use of tranquilizers, follow strict procedures when placing youths in solitary confinement, and increase the ratio of staff to youth.

In 1977, the Fifth Circuit held that there was no right to treatment and limited future relief to the Eighth Amendment prohibition against cruel and unusual punishment. The case was remanded for additional hearings, given the length of time and changes to TYC.

In 1977, Representative Emmett Whitehead introduced a bill in the Texas Legislature to build a TYC facility on a vacant lot next to Judge Justice’s house. The bill passed the House, but died in the Senate.

In April 1984, the Judge approved the second revised settlement agreement. The settlement established a Morales Consultant Committee to oversee TYC’s progress on the mandated reforms. Monitoring ended in 1988.