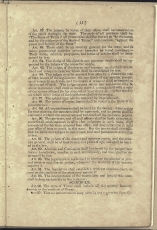 Art. 96. The state of Texas shall include all the country formerly known as the province of Texas.

Art. 97. That no inconvenience may arise in our separation from Coahuila, it is declared that all rights, actions, prosecutions, and contracts, shall continue as if no change had taken place, except in cases provided for in the body of this constitution.

Art. 98. All dues, fines, penalties, and forfeitures due and owing to the State of Coahuila and Texas, shall be collectable in the name, and for the use of Texas. All bonds for the performance of duties, shall be passed over to the first Governor of Texas, and his successors in office, for the use and benefit of the parties interested.

Art. 99. The authorities of the State of Coahuila and Texas shall fill their offices within the limits of Texas, and shall continue in the exercise of their respective duties until suspended under this construction.

Art. 101. All officers or persons elected, or appointed to any office or place of trust, profit, or honor, in this state, before entering upon the duties of his office, or station, shall take the following oath:--"I A.B. do solemnly swear, that I will support the constitution of the United Mexican States, the constitutive act, and the constitution of this state, and that I will faithfully discharge the duties of the office of -----, according to law, to the best of my abilities.--So help me God."

Art. 102. The election of Senators and Representatives to the general congress, shall take place agreeably to the provisions of the Federal constitution of the United Mexican States; and laws to that effect, shall be passed by the legislature.

Art. 104. Until the first enumeration shall be made as described by this constitution, the senatorial districts shall be composed of the following precincts:

Art. 105. The number of representatives that each of the precincts, above enumerated, shall have in the first legislature, shall be determined by the number of votes given in at the first election, on the basis of one representative for every hundred voters, without counting fractions under one hundred. Provided, that each precinct shall have one representative, whatever may be the number of its voters. After all the votes are taken, and the polls are closed, the judges of the election shall declare the persons who have received the highest number of votes for representatives, to be duly elected, agreeably to the basis above established, and shall issue certificates to such persons accordingly. In case of a tie between two ore more, it shall be decided by lot, by the judges.

Art. 106. All powers, or grants of power, rights, or privileges, and immunities, not expressly given or granted by this constitution, are reserved to, and shall remain with, the People of the State, and can only be divested, or delegated, by amendment of this Constitution.

DONE in the Town of San Felipe de Austin, in Convention of the People of Texas, by means of their chosen Delegates, on the thirteenth day of April, in the Year of our Lord, eighteen hundred and thirty-three.

WILLIAM H. WHARTON.
Member and President of the Convention.

The paragraph following has been omitted at the proper place. It should be article 60 and follow article 59, under the head of LEGISLATURE. In the copy it stood as 85.

Art. 85. The existing law of the State of Coahuila and Texas, when this constitution goes into effect, shall continue in force until altered, or abolished, by the legislature; Provided, however, that the legislature shall never adopt any system or code of laws by general reference to said system or code, but in all cases shall specify the several provisions of the laws it may enact.

Note: The copy of this document held by the Center for American History was owned by Samuel Houston and has his signature on both the cover and back page.