CONSTITUTION OR FORM OF GOVERNMENT OF THE STATE OF TEXAS. 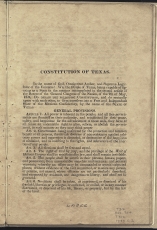 MADE IN GENERAL CONVENTION, IN THE TOWN OF SAN FELIPE DE AUSTIN, IN THE MONTH OF APRIL, 1833.

In the name of God, Omnipotent Author, and Supreme Legislator of the Universe! We, the People of Texas, being capable of figuring as a State in the manner contemplated in the second article of the Decree of the General Congress of the Nation, of the 7th of May, 1824, DO ORDAIN THE FOLLOWING CONSTITUTION, and do mutually agree with each other, to form ourselves into a Free and Independent State of the Mexican Confederacy, by the name of the STATE OF TEXAS.

ARTICLE 1. All power is inherent in the people; and all free governments are founded on their authority, and established for their peace, safety, and happiness: for the advancement of these ends, they have at all times an undeniable right to alter, reform, or abolish the government, in such manner as they may think proper.

Art. 2. Government being instituted for the protection and common benefit of all persons, the slavish doctrine of non-resistance against arbitrary power and oppression is discarded, as destructive of the happiness of mankind, and as insulting to the rights, and subversive of the liberties of any people.

Art. 3. All elections shall be free and equal.

Art. 4. The right of trial by jury, and the privilege of the Writ of Habeas Corpus shall be established by law, and shall remain inviolable.

Art. 5. The people shall be secure in their persons, houses, papers, and possessions, from unreasonable searches and seizures: and general warrants, whereby an officer may be commanded to search suspected places, without evidence of the fact committed, or to seize any person, or persons, not named, whose offences are not particularly described, and supported by evidence, are dangerous to liberty, and shall not be granted.

Art. 6. No citizen shall be taken, or imprisoned, or disseized of his freehold, liberties or privileges, or outlawed, or exiled, or in any manner distrained, or deprived of his life, liberty, or property, but by the law of the land.

Art. 7. In all criminal prosecutions, the accused hath a right to be heared by himself and his counsel, to demand the nature and cause of the accusation against him, and to have a copy thereof: he shall be confronted by his accusers and the witnesses, he shall have compulsory processes for obtaining witnesses in his favor, and in prosecutions by indictment or presentment, a speedy public trial, by an impartial jury of the municipality or district, in which the crimes shall have been committed; and shall not be compelled to give evidence against himself.

Art. 8. No person shall, for the same offence, be twice put in jeopardy of life or limb.

Art. 9. No retrospective law, or law impairing the obligation of contracts shall be made.

Art. 10. No conviction shall work corruption of blood, or forfeiture of estate.

Art. 11. No person arrested, or confined in jail, shall be treated with unnecessary rigour.

Art. 12. No person shall be compelled to answer any criminal charge but by presentment, indictment, or impeachment, or by a concurrent vote of both houses of the legislature, as provided by the constitution.

Art. 13. All persons shall be bailable by sufficient sureties, unless for capital crimes, when the proof is evident, or the presumption strong; and the privilege of the Writ of Habeas Corpus shall not be suspended, except when in cases of rebellion, or invasion, the public safety may require it.

Art. 14. Excessive bail shall not be required, nor excessive fines imposed: or cruel or unusual punishment inflicted: all courts shall be open, and every man, for an injury done him in his lands, goods, person, or reputation, shall have remedy by due course of law, and right and justice administered, without sale, denial, or delay.

Art. 15. The person of a debtor, where there is not a strong presumption of fraud, shall not be continued in prison after delivering up his estate for the benefit of his creditor, or creditors, in such manner as shall be prescribed by law.

Art. 16. The free communication of thoughts and opinions, is one of the inviolable rights of man; and every person may freely speak, write, print, and publish, on any subject, being responsible for the abuse of that liberty: but in prosecutions for the publication of papers investigating the official conduct of men in public capacity, the truth thereof may be given in evidence, as well as in personal actions of slander; and in all indictments for libles, the jury shall have the right to determine the law and the facts, under the direction of the court as in other cases.

Art. 17. No man's particular service shall be demanded, nor property taken, or applied to public use, without the consent of himself, or his, representative; or without just compensation being made therefor, according to law.

Art. 18. The people have a right to assemble together, in a peaceable manner, for their common good: to instruct their representatives and to apply to those invested with the powers of government, for redress of grievances, or for other proper purposes, by address or remonstrance.

Art. 19. Perpetuities and monopolies are contrary to the genius of a free government, and shall not be allowed.

Art. 20. The sure and certain defence of a free people, is a well regulated militia: and it shall be the duty of the legislature to enact such laws, as may be necessary to the organization of the militia of this State.

Art. 21. No soldier, in the time of peace, shall be quartered in the house, or within the inclosure of any individual, without the consent of the owner; nor in time of war, but in a manner prescribed by law.

Art. 22. No property qualifications shall be required to entitle a citizen to vote, or hold any office, in the gift of the people of this State.

Art. 23. All persons residing in Texas, at the date of this Constitution, except bonded servants, and other persons not liable to taxation by virtue of laws enacted under this Constitution, shall be regarded as citizens, and as being entitled to all the benefits of persons who emigrated to the country under the Colonization Law of 1825, and shall be acknowledged and admitted to all the rights and privileges of such immigrants.

Art. 24. All contracts and transfers of property, by will or otherwise, as well in relation to real as personal estate, which have been made in Texas heretofore, or which hereafter may be made, in good faith, by the parties, shall not be void for any want of form or technicality, but shall be construed and enforced according to the true intention of the parties.

Art. 25. Treason against the State shall consist only in levying war against it, or adhering to its enemies, giving them aid and comfort.--No person shall be convicted of treason, unless on the testimony of two witnesses to the same overt act.

Art. 26. The benefits of education, and of useful knowledge, generally diffused through a community, are essential to the preservation of a free government. The protection and advancement of these great objects are given in special and solemn charge to the legislature.--It shall be a particular duty of the government to patronize and cherish the interests of literature, of science, and the arts; and as soon as practicable, to establish schools, where the poor shall be taught gratis.

Art. 27. All elections in this State, shall be by ballot: and the manner thereof shall be prescribed by law.

Art. 28. All lands in this State, liable to taxation, held by deed, grant, concession, colonization law, or otherwise, shall be taxed according to their valuation.

Art. 29. The right of suffrage shall not be exercised by any person of insane mind, or who shall be a pauper, or supported by public or private charity, nor by any non-commissioned officer, soldier, seaman, or marine, in the service of the United Mexican States; nor by any person convicted of an infamous offence, hereafter committed.

Art. 30. No bank nor banking institution, nor office of discount and deposit, nor other monied corporation, nor private banking establishment, shall ever exist during the continuance of this constitution.

Art. 31. All lands within the limits of Texas, at this date vacant, or not held agreeable to law, or to be located under genuine and bonifide grants, now issued and received by the grantee, or grantees, or otherwise provided for by this constitution, shall belong and constitute a fund for the use of the state; and be subject to the disposal of the legislature: Provided, that nothing contained in this article shall be so construed, as to prejudice the rights of citizens, colonists or settlers, who hold, or are entitled to acquire, under this constitution, lands by deed, grant, concession, or settlement right.