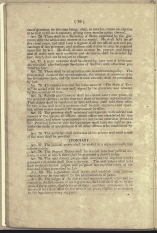 Art. 77. The judicial power shall be vested in a supreme court, and inferior courts.

Art. 78. The State of Texas shall be divided into four judicial districts, in each of which there shall be appointed a district judge.

Art. 80. The legislature shall create and establish such inferior courts as may be convenient for the administrative of justice.

Art. 81. The judges of the district and supreme courts, who shall be elected at the first session of the legislature, shall hold their offices for the term of three years, eligible for re-election; and their successors in office shall hold their office for the term of six years, eligible to re-election by the legislature every six years.

Art. 83. There shall be an attorney general for the state, and as many prosecuting attornies as may hereafter be found necessary.--Their duties, salaries, perquisites, and terms of service shall be determined by law.

Art. 84. The clerks of the districts and supreme courts shall be appointed by the judges of the respective courts.

Art. 85. The judges of the district and supreme courts shall receive fixed and adequate salaries, which shall be established by law.

Art. 86. The judges may be removed from office by a concurrent vote of both houses of the legislature: but two-thirds of the number present, must concur in such vote, and the causes of removal shall be entered on the journal of each. The judge against whom the legislature may be about to proceed, shall receive notice thereof, accompanied by a copy of the causes alleged for his removal, at least thirty days before the day on which either house of the legislature shall sit thereupon.

Art. 87. The judges may also be removed by impeachment.

Art. 88. The power of impeachment shall be vested in the house of representatives.

Art. 89. All impeachments shall be tried by the Senate: when acting for that purpose, the members shall be upon oath, and no person shall be convicted without the concurrence of two-thirds of the members present.

Art. 90. The governor, and all civil officers shall be liable to impeachment for all misdemeanors in office: but judgment in such cases, shall not extend further than removal from office, and disqualification to hold any office of trust or profit, in this state. But the parties shall nevertheless, be liable and subject to indictment, trial and punishment according to law.

Art. 91. The judges of the district and supreme courts, and the attorney general, shall be at least twenty-five years of age, and shall be learned in the law.

Art. 92. Alcaldes and Comisarios shall be elected by the people; their duties, jurisdiction, number in each municipality, and fees, shall be determined by law.

Art. 93. The legislature is authorized to increase the number of judicial districts and district judges, whenever the necessity of the country requires it.

Art. 94. The legislature shall establish a separate supreme court, so soon as the condition of the state may require it.

Art. 95. The interpretation of the constitution and laws of this state shall belong exclusively to the judiciary.