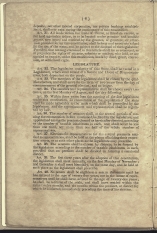 Art. 32. The legislative authority of this State, shall be vested in a Legislature, which shall consist of a Senate and House of Representatives, both dependent on the people.

Art. 33. The members of the legislature shall be chosen by the qualified electors, and shall serve for the term of two years from the day of commencement of the general election, and no longer.

Art. 34. The senators and representatives shall be chosen every two years, on the first Monday of August, and the day following.

Art. 35. Within three years from the meeting of the first legislature under this constitution, an enumeration of the population of the state shall be made agreeably to the mode which shall be prescribed by the legislature, and the apportionment and representation shall be regulated by law.

Art. 36. The number of senators shall, at the several periods of making the enumeration before mentioned, be fixed by the legislature, and apportioned among the precincts, formed as hereinafter directed, according to the number of taxable inhabitants in each, and shall never be less than one third, nor more than one half of the whole number of representatives.

Art. 37. Elections for representatives for the several precincts entitled to representation, shall be held at the places of holding their respective courts, or at such other places as the legislature may prescribe.

Art. 38. The senators shall be chosen by districts, to be formed by the legislature according to the number of taxable inhabitants in each, provided that no precinct shall be divided in forming a senatorial district.

Art. 40. No person shall be eligible to a seat in the senate until he has arrived to the age of twenty-five years, nor in the house of representatives until he shall have arrived to the age of twenty-one years; he shall be a citizen of the state, and shall have resided within the same twelve months, and six months within the precinct, or district for which he is elected, immediately preceding the time of his election.

Art. 41. Every male inhabitant of the age of twenty-one years, who shall be a citizen of the state, and shall have resided for the last six months, immediately preceding the day of election, within the precinct, or district, shall enjoy the right of an elector.

Art. 42. The senate, at its meeting, shall elect a president pro tempore; and the house of representatives shall elect its speaker. Each house shall elect its own officers, and be judges of the qualifications and election of its members.

Art. 43. Each house may determine the rules of its proceedings; punish its members for disorderly behavior, and with the concurrence of two-thirds, expel a member; but not a second time for the same offense; and shall have all other powers necessary for the legislature of a state.

Art. 44. Senators and representatives shall, in all cases except treason, felony, or breach of the peace, be privileged from arrest during the session of the legislature, and in going to and returning from the same.

Art. 45. Each house may punish, by imprisonment, any person not a member, who shall be guilty of disrespect to the house, by any disorderly or contemptuous behavior in their presence;--Provided, that such imprisonment shall not be for a longer time than thirty days.

Art. 46. Bills may originate in either house, but may be afterwards amended or rejected by the other.

Art. 47. Every bill shall be read on three different days, and signed by the president of the senate, and speaker of the house of representatives, before it becomes a law, unless the public safety should be endangered by delay.

Art. 48. After a bill has been rejected, no bill containing the same substance shall be passed into a law during that session.

Art. 49. The style of the laws of this state shall be --"Be it enacted by the Senate and House of Representatives of the State of Texas."

Art. 50. Each house shall keep a journal of its proceedings, and publish them, except such parts as the welfare of the state may require to be kept secret; and the yeas and nays of the members, on any question, shall at the request of one-fourth of the members present, be entered on the journal.

Art. 51. The legislature shall have power to establish, from time to time, the salaries of all the officers of the state; and to regulate the compensation of its own members.

Art. 52. The doors of each house, and committees of the whole, shall be kept open, unless when the business before them require secrecy.

Art. 53. No money shall be drawn from the treasury but in pursuance of appropriation by law.

Art. 54. No person, who heretofore hath been, or hereafter may be a collector, or holder of public monies, shall have a seat in either house of the legislature of the state, until such person shall have accounted for, and paid into the treasury, all sums for which he may be liable.

Art. 55. No judge of any court of law, or equity, secretary of state, attorney general, register, clerk of any court of record, or person holding any office under the authority of the Mexican United States, shall have a seat in the legislature of this state, nor shall any person in this state hold more than one lucrative office at one and the same time; Provided, that no appointment in the militia, or to the office of justice of the peace, so long as no salary is attached thereto, shall be considered a lucrative office.

Art. 56. If any member of the legislature is appointed to, or elected to, or accepts any other office than that of justice of the peace, trustee of a literary society, or commission in the militia, such appointment and acceptance shall be a vacation of his seat in the legislature; and no member thereof shall be eligible to hold any office, created by the legislature, during his term of service as a member.

Art. 57. Any member of either house of the legislature shall have liberty to dissent from, and protest against, any act or resolve which he may think injurious to the public, or to any individual, and have the reasons of his dissent entered on the journals.

Art. 58. The legislature shall have power to establish such a system of internal improvement as they may think proper.

Art. 59. The legislature shall have power to enact laws to impose taxes, and collect money for use of the state; but no currency shall ever be made a lawful tender, except gold, silver and copper coin.