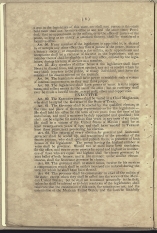 Art. 60. The Executive power shall be vested in a Chief Magistrate, who shall be styled the Governor of the State of Texas.

Art.61. The Governor shall be elected by the qualified electors, at the time and place of choosing representatives for the legislature.--He shall hold his office for the term of two years from the time of his installation, and until a successor be duly appointed and qualified; but shall not be eligible for more than four years in any term of six years. He shall be a citizen of the United States of Mexico; shall be at least twenty-seven years of age, and shall have resided in Texas at least three years, next preceding his election.

Art. 62. The returns of every election for governor and lieutenant governor shall be sealed up, and transmitted to the president of the senate pro tem. who shall open and publish them, in the presence of both houses of the legislature. The person having the highest number of votes shall be governor. Should two or more have been candidates for the office, and two or more persons be equal and highest in number of those who are equal and highest shall be chosen governor, by joint ballot of both houses; and in like manner, under similar circumstances, shall the lieutenant governor be chosen.

Art. 63. The governor shall, at state times, receive for his services a compensation which shall be neither increased nor reduced during the term for which he shall have been elected.

Art. 64. The governor shall be commander in chief of the militia of the state; except when they shall be called into the service of the Mexican United States; but he shall not command personally in the field, unless he shall be advised so to do by resolution of the legislature; shall take care that the constitution of this state, the constitutive act, and the constitution of the Mexican United States, and the laws be faithfully executed; shall communicate to the legislature at every session the condition of the state; and recommend such measures as he may deem expedient; he shall have power to convene the legislature, when, in his opinion, the interest of the state may require it; to grant reprieves and pardons, except in case of impeachment; to conduct all correspondence, or intercourse, with other states, and with the general government; and during the recess of the legislature, to fill, pro tempore, until the end of the next succeeding session, all vacancies in those office which it may be the duty of the two houses, or of the executive and senate, to fill permanently.

Art. 65. Every bill which shall have passed both houses of the legislature, shall be presented to the governor; if he approve he shall sign it, but if not, he shall return it, with his objections, to the house in which it shall have originated, who shall enter the objections at large upon the journals, and proceed to reconsider it; if, after such reconsideration, a majority of the whole number elected to that house shall agree to pass the bill, it shall be sent, with the objections, to the other house, by whom it shall likewise be reconsidered; if approved by a majority of the whole number elected to that house, it shall be come a law; but in such cases, the votes of both houses shall be determined by yeas and nays, and the names of the members voting for or against the bill, shall be entered on the journals of each house, respectively. If any bill shall not be returned by the governor within five days, Sundays excepted, after it shall have been presented to him, the same shall be a law in like manner, as if he had signed it, unless the legislature by their adjournment, prevent its return, in which case it shall not be a lw.

Art. 66. Every order, resolution, or vote to which the concurrence of both houses may be necessary, except on questions of adjournment, shall be presented to the governor, and before it shall take effect be approved by him; or being disapproved, shall be repassed by both houses, according to the rules and limitation prescribed in the case of a bill.

Art. 67. There shall be a Lieutenant Governor, who shall be elected at the same time, in the same manner, for the same term, and shall possess the same qualifications as the governor. The electors shall designate for whom they vote as governor, and for whom as lieutenant governor.

Art. 68. The lieutenant governor shall, exoficio, be president of the senate, and when there is an equal division in the senate, shall give the casting vote; and also, in joint voting of both houses.

Art. 69. When the office of governor shall become vacant by death, resignation, absence from the state, removal from office, refusal to qualify, impeachment, or otherwise, the lieutenant governor, or in case of like disability on his part, the president of the senate pro tempore; or if there be no president of the senate pro tem. the speaker of the house of representatives shall possess all the powers and discharge all the duties of governor; and shall receive for his services the like compensation to the end of the term, or until the disability of the governor be removed, Provided, that should the office become permanently vacant, within ten months from the beginning of the term, the person exercising the powers of governor, for the time being, shall, as may be, cause an election to be held to fill such vacancy, giving three months notice thereof.

Art. 70. There shall be a Secretary of State, appointed by the governor, with the advice and consent of the senate. He shall hold his office three years, and shall keep a register of all the official acts and proceedings of the governor, and perform such duties as may be enjoined upon him by law. He shall, as soon as may be, procure and keep a seal of state, with such emblems and devices as shall be directed by law, which shall not be subject to change.

Art. 71. A state treasurer shall be elected by joint vote of both houses who shall also discharge the duties of Auditor, until otherwise provided by law.

Art. 72. There shall be an ayuntamiento in each municipality. The powers and duties of the ayuntamientos, the number of members who are to compose the, and the mode of their election, shall be prescribed by law.

Art. 73. All commissions shall be in the name of "The State of Texas," be sealed with the state seal, signed by the governor, and attested by the secretary of state.

Art. 74. Sheriffs and Coroners shall be elected every two years, by the qualified electors; at the time and place of choosing representatives. Their duties shall be regulated by law, and they shall hold their office for two years, and until a successor shall be duly appointed and qualified, unless sooner removed for misdemeanor in office.

Art. 75. The governor shall nominate and appoint, with advice and consent of the senate, all officers whose offices are established by this constitution, and who appointments are not herein otherwise provided for: Provided, however that the legislature shall have the right to prescribe the mode of appointment of all other officers to be established by law.

Art. 76. The governor shall make use of his private seal until a seal of the state shall be provided.