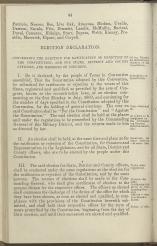 CONCERNING THE ELECTION FOR RATIFICATION OR REJECTION OF THE CONSTITUTION, AND FOR STATE, DISTRICT AND COUNTY OFFICERS, AND MEMBERS OF CONGRESS.

I. Be it declared, by the people of Texas in Convention assembled, That the Constitution adopted by this Convention, be submitted for ratification or rejection to the voters of this State, registered and qualified, as provided by the acts of Congress, known as the reconstruction laws, at an election commencing on the first Monday in July, 1869, and continuing for the number of days specified in the Constitution adopted by this Convention, for the holding of general elections. The vote on said Constitution shall be "For the Constitution" and "Against the Constitution." The said elections shall be held at the places and under the regulations to be prescribed by the Commanding General of this Military District, and the returns made to him as directed by law.

II. An election shall be held, at the same time and place as for the ratification or rejection of the Constitution, for Senators and Representatives in the Legislature, and for all State, District and County officers, who are to be elected by the people under this Constitution.

III. The said election for State, District and County officers, shall be conducted under the same regulations as the election for the ratification or rejections of the Constitution, and by the same persons. The returns of elections shall be made to the Commanding General, who shall give certificates of election to the persons chosen for the respective offices. The officers as elected shall commence the discharge of the duties of the office for which they have been chosen, as soon as elected and qualified, in compliance with the provisions of the Constitution herewith submitted, and shall hold their respective offices for the term of years prescribed by the Constitution, beginning from the day of their election, and until their successors are elected and qualified.

IV. An election for members of the United States Congress shall be held in each Congressional District as established by this Convention, at the same time and place as the election for ratification or rejection of the Constitution. Said election shall be conducted by the same persons and under the same regulations as before mentioned in this declaration. The returns shall be made to the Commanding General, who shall give the persons chosen certificates of election.

V. The members of the Legislature, elected under this declaration, shall assemble at the Capitol, in the City of Austin, on the 2d Monday in September, A. D. 1869.

VI. The Commanding General of this Military District is requested to enforce this Declaration.