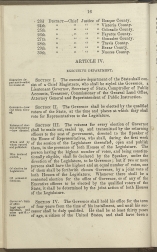 SECTION I. The executive department of the State shall consist of a Chief Magistrate, who shall be styled the Governor, a Lieutenant Governor, Secretary of State, Comptroller of Public Accounts, Treasurer, Commissioner of the General Land Office, Attorney General and Superintendent of Public Instruction.

SECTION II. The Governor shall be elected by the qualified voters of the State, at the time and places at which they shall vote for Representatives to the Legislature.

SECTION IV. The Governor shall hold his office for the term of four years from the time of his installment, and until his successor shall be duly qualified. He shall be at least thirty years of age, a citizen of the United States, and shall have been a resident and citizen of the State of Texas for three years immediately preceding his election. He shall be inaugurated on the first Thursday after the organization of the Legislature, or as soon thereafter as practicable.

SECTION V. The Governor shall, at stated times, receive a compensation for his services, which shall not be increased nor diminished during the term for which he may have been elected. His annual salary shall be five thousand dollars, until otherwise provided by law, exclusive of the use and occupation of the Governor's Mansion, fixtures and furniture.

SECTION VI. He shall be Commander in Chief of the militia of the State, except when they are called into the actual service of the United States.

SECTION VII. He may, at all times, require information in writing from all the officers of the Executive Department, on any subject relating to the duties of their offices. If a vacancy occurs in any of the executive offices, by death, resignation or removal, or from any other cause, during the recess of the Legislature, the Governor shall have power, by appointment, to fill such vacancy; which appointment shall continue in force till the succeeding session of the Legislature, when he shall communicate such appointment to the Senate for confirmation, or rejection. If it be confirmed by the Senate, the term of office shall continue until the regular return of the periodic election of said office.

SECTION VIII. He shall have power, by proclamation, on extraordinary occasions, to convene the Legislature at the seat of government; but if the prevalence of dangerous disease, or the presence of the public enemy there, shall render it necessary, then at any other place within the State he may deem expedient.

SECTION IX. He shall, from time to time, give to the Legislature information, in writing, of the condition of the State, and recommend to their consideration such measures as he may deem expedient.

SECTION X. He shall take care that the laws be faithfully executed.

SECTION XI. In all criminal cases, except treason and impeachment, he shall have power, after conviction, to grant reprieves and pardons; and under such rules as the Legislature may prescribe, he shall have power to remit fines and forfeitures. With the advice and consent of the Senate, he may grant pardons in cases of treason; and, to this end, he may respite a sentence therefor until the close of the succeeding session of the Legislature; provided, that in all cases of remission of fines of forfeitures, or grants of reprieve or pardon, the Governor shall file, in the office of the Secretary of State, his reasons therefor.

SECTION XII. Nominations to fill vacancies occurring in the recess of the Legislature, shall be made by the Governor during the first ten days of its session; and should any such nomination be rejected, the same person shall not again be nominated, during the session, to fill the same office.

SECTION XIV. No person, holding the office of Governor, shall hold any other office or commission, civil or military.

SECTION XV. At the time of the election of a Governor, there shall also be elected by the qualified voters of the State, a Lieutenant Governor, possessing the same qualifications as the Governor, and who shall continue in office for the same period of time. He shall, by virtue of his office, be President of the Senate; and shall have, when in committee of the whole, the right to debate and vote on all questions; and, when the Senate is equally divided, to give the casting vote. In case of the death, resignation, removal from office, inability, or refusal of the Governor to serve, or of his impeachment or absence from the State, the Lieutenant Governor shall exercise the powers and authority appertaining to the office of Governor, until another be chosen at the periodical election, and be duly qualified; or until the Governor, impeached, absent or disabled, shall be acquitted, returned, or his disability be removed.

SECTION XVII. There shall be a Secretary of State appointed by the Governor, by and with the advice and consent of the Senate, who shall continue in office during the term of service of the Governor elect. He shall keep a fair register of all the official acts and proceedings of the Governor, and shall, when required, lay the same, with all papers, minutes and vouchers relative thereto, before the Legislature, or either House thereof, and shall perform such other duties as may be required of him by law.

SECTION XVIII. There shall be a seal of the State, which shall be kept by the Governor and used by him officially. The seal shall be a star of five points, encircled by an olive and live oak branches, and the words, "The State of Texas."

SECTION XIX. All commissions shall be in the name and by the authority of the State of Texas, be sealed with the State seal, signed by the Governor, and attested by the Secretary of State.

SECTION XX. There shall be a Comptroller of Public Accounts, elected by the qualified voters of the State, at the same time and in the same manner as the Governor is elected, and having the same qualifications, who shall hold his office for the term of four years. He shall superintend the fiscal affairs of the State; give instructions to the Assessors and Collectors of the Taxes; settle with them for taxes; take charge of all escheated property; keep an account current of all moneys paid into the treasury, and of all lands escheated to the State; publish annually a list of delinquent Assessors and Collectors, and demand of them an annual list of all tax payers in their respective counties, to be filed in this office; keep all the accounts of the State; audit al the claims against the State; draw warrants upon the Treasury in favor of the public creditors; and perform such other duties as may be prescribed by law.

SECTION XXII. A Commissioner of the General Land Office shall be elected by the qualified voters of the State at the same time and in the same manner as the Governor, Comptroller of Public Accounts and Treasurer may be elected, who shall hold his office for a like period of time and shall possess the same qualifications. He shall be the custodian of the archives of the land titles of the State; the register of all land titles hereafter granted, and shall perform such other duties as may be required by law.

SECTION XXIII. There shall be an Attorney General of the State having the same qualifications as the Governor, Lieutenant Governor, Comptroller of Public Accounts and Treasurer, who shall be appointed by the Governor, with the advice and consent of the Senate. He shall hold his office for the term of four years. He shall reside at the capital of the State during his term of office. He shall represent the interests of the State in al suits or pleas in the Supreme Court, in which the State may be a party; superintend, instruct and direct the official action of the District Attorneys so as to secure all fines and forfeitures, all escheated estates, and all public moneys to be collected by suit; and he shall, when necessary, give legal advice in writing to all officers of the government; and perform such other duties as may be required by law.

SECTION XXIV. The Secretary of State, Comptroller of Public Accounts, Treasurer, Commissioner of the General Land Office and Attorney General, shall each receive for his services the annual salary of three thousand dollars; and which shall neither be increased nor diminished during his continuance in office.

SECTION XXV. Every bill, which shall have passed both Houses of the Legislature, shall be presented to the Governor for his approval. If he approves, he shall sign it, but if he disapprove it, he shall return it, with his objections to that House in which it originated; which House shall enter the objections at large upon the journals of the House, and proceed to reconsider it. If, after such reconsideration, two-thirds of the members present shall agree to pass the bill, it shall be sent with the objections to the other House, by which it shall likewise be reconsidered. If approved by two-thirds of the members present of that House, it shall become law; but, in such cases, both Houses shall determine the question by yeas and nays, with the names of the members respectively entered upon the journals of each House. If a bill shall not be returned by the Governor within five days (Sundays excepted) after it shall have been presented to him, it shall become a law in like manner as if he had signed it. Every bill presented to the Governor one day before the final adjournment of the two Houses, and not signed by him, shall become a law, and shall have the same force and effect as if signed by him. The Governor may approve any appropriation and disapprove any other appropriation in the same bill, by signing the bill, and designating the appropriation disapproved, and sending a copy of such appropriation, with his objections, to the House in which it originated; and the same proceedings shall be had, on that part disapproved, as on the other bills disapproved by him; but if the Legislature shall have adjourned before it is returned, he shall return it, with his objections, to the Secretary of State, to be submitted to both Houses at the succeeding session of the Legislature.

SECTION XXVI. Every order, resolution, or vote, in which the concurrence of both Houses shall be required, except the question of adjournment, shall be presented to the Governor, and must be approved by him before it can take effect; or, being disapproved, shall be repassed in the manner prescribed in the case of a bill.