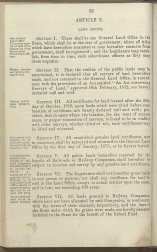 SECTION I. There shall be one General Land Office in the State, which shall be at the seat of government, where all titles which have heretofore emanated or may hereafter emanate from government, shall be registered; and the Legislature may establish, from time to time, such subordinate officers as they may deem requisite.

SECTION II. That the residue of the public lands may be ascertained, it is declared that all surveys of land heretofore made, and not returned to the General Land Office, in accordance with the provisions of an Act entitled "An Act concerning Surveys of Land," approved 10th February, 1852, are hereby declared null and void.

SECTION III. All certificates for land located after the 30th day of October, 1856, upon lands which were titled before such location of certificate, are hereby declared null and void; provided, that in cases where the location, for the want of correct maps, or proper connection of surveys, is found to be in conflict with older surveys, whether titled or not, such certificates may be lifted and relocated.

SECTION IV. All unsatisfied genuine land certificates, now in existence, shall be surveyed and returned to the General Land Office by the first day of January, 1873, or be forever barred.

SECTION V. All public lands heretofore reserved for the benefit of Railroads or Railway Companies, shall hereafter be subject to location and survey by any genuine land certificates.

SECTION VI. The Legislature shall not hereafter grant lands to any person or persons, nor shall any certificate for land be sold at the Land Office, except to actual settlers upon the same, and in lots, not exceeding 160 acres.

SECTION VII. All lands granted to Railway Companies, which have not been alienated by said Companies, in conformity with the terms of their charters, respectively, and the laws of the State under which the grants were made, are hereby declared forfeited to the State for the benefit of the School Fund.

SECTION IX. The State of Texas hereby releases to the owner or the owners of the soil all mines and mineral substances that may be on the same, subject to such uniform rate of taxation as the Legislature may impose.