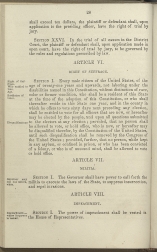 SECTION I. Every male citizen of the United States, of the age of twenty-one years and upwards, not laboring under the disabilities named in this Constitution, without distinction of race, color or former condition, who shall be a resident of this State at the time of the adoption of this Constitution, or who shall thereafter reside in this State one year, and in the county in which he offers to vote sixty days next preceding any election, shall be entitled to vote for all officers that are now, or hereafter may be elected by the people, and upon all questions submitted to the electors at any election; provided, that no person shall be allowed to vote, or hold office, who is now, or hereafter may be disqualified therefor, by the Constitution of the United States, until such disqualification shall be removed by the Congress of the United States; provided, further, that no person, while kept in any asylum, or confined in prison, or who has been convicted of a felony, or who is of unsound mind, shall be allowed to vote or hold office.