Under auspices of the Congressional Reconstruction Acts of 1867, a constitutional convention met in 1868 and 1869 but was unable to successfully draft a constitution. Under the orders of the federal military officers, the work of the convention was edited and published as the Constitution of 1869. This unusual process resulted in much controversy and the legitimacy of the 1869 constitution was disputed.

Constitution of the State of Texas, Adopted by the Constitutional Convention Convened under the Reconstruction Acts of Congress Passed March 2, 1867, and the Acts Supplementary thereto; to be Submitted for Ratification or Rejection at an Election to Take Place on the First Monday of July, 1869. Austin, Texas: Printed at the Daily Republican Office. 1869. Winkler-Friend 2121. Download PDF 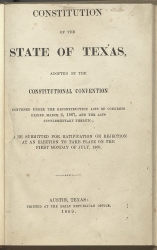