While hearings are not held on all proposed legislation, a Congressional committee may decide to hold hearings on a bill or several related bills. (The other types of Congressional hearings are: oversight, confirmation, and investigative.) The published version of a hearing on a piece of proposed legislation may include: the bill text, written and oral statements by witnesses (agency representatives, experts, and interested parties), transcripts of question-and-answer sessions, reports, exhibits, and materials submitted for the record by witnesses, as well as correspondence and other materials submitted by interested parties.

If a hearing is published, the Government Publishing Office (GPO) will print the official, complete version. Unofficial and incomplete materials may be available (such as prepared statements and transcripts), but these will vary from the official version, at least in part because witnesses may edit their remarks for the official version.

Since 1983 (98th Congress), the Senate has had a numbering system for hearings, but the House still does not have one.

For streaming live audio of hearings, go to CapitolHearings.org.

Please note, access to certain databases linked in this guide may be restricted to the Texas Law or UT community; please see the library's Databases page that lays out access privileges.

Example of a Hearing

This hearing related to the No Child Left Behind Act displays such standard elements as:

Bluebook citation, Rule 13.3: Improving Student Achievement through Technology: Hearing Before the Subcomm. on 21st Century Competitiveness of the H. Comm. on Education and the Workforce, 107th Cong. (2001). 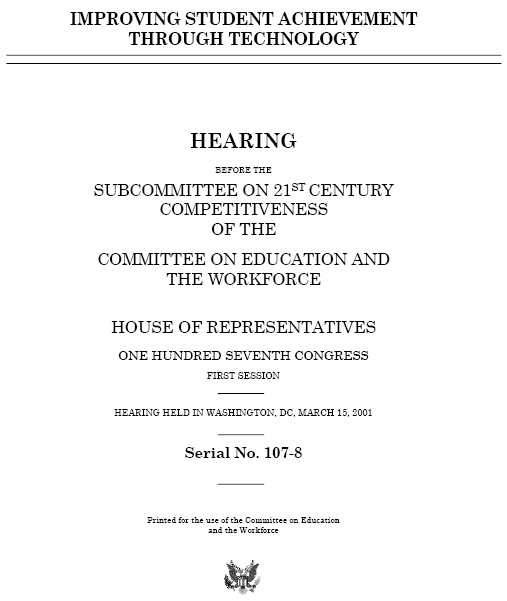 Where to Find Hearings - Online

Where to Find Hearings - Print

If you wind up needing a hearing or report in microfiche from CIS (via ProQuest Congressional or Lexis), then you will find it using what is called an "accession number." CIS was a commercial publisher (now part of ProQuest) that sought to make congressional information more accessible via indexing and microfiche reproduction. As part of this process, CIS assigned accession numbers to congressional documents as they processed them. Understanding the code behind the numbers can help in homing in on the right microfiche.

The numbers are assigned each year and have five parts. For example, while it is not printed in the document itself, the CIS accession number of the sample hearing pictured on this page ("Improving Student Achievement through Technology") is H341-4. The first part of the accession number is actually a letter indicating the issuing body: H=House, J=Joint, and S=Senate. The second and third parts identify the committee or special category. This sample hearing was issued by the House Committee on Education and the Workforce, whose designation is 34. The fourth part indicates the type of document (1=hearing and 3=report). So now we have H341. The last part after the dash is simply the numerical order of issuance in a given year, hence H341-4.

You can watch live streams of House committee hearings (not the Senate) through the Library of Congress's website Congress.gov.

Once you have clicked on a committee the live stream will appear, or you will see the message “No live streams are currently available.” Recordings of previous hearings are listed below when available. The House committee hearings can also be viewed on a variety of mobile devices, including Android phone, iPhone, and iPad.