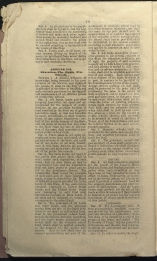 SECTION 1. A general diffusion of knowledge being essential to the preservation of the liberties and rights of the people, it shall be the duty of the Legislature of the State to establish and make suitable provision for the support and maintenance of an efficient system of public free schools.

SEC. 2. All funds, lands and other property heretofore set apart and appropriated for the support of public schools; all the alternate sections of land reserved by the State out of grants heretofore made or that may hereafter be made to railroads, or other corporations, or any nature whatsoever; one-half of the public domain of the State, and all sums of money that may come to the State from the sale of any portion of the same, shall constitute a perpetual public school fund.

SEC. 3. There shall be set apart annually not more than one-fourth of general revenue of the State, and a poll tax of one dollar on all male inhabitants in this State between the ages of twenty-one and sixty years, for the benefit of the public free schools.

SEC. 4. The lands herein set apart to the public free school fund shall be sold under such regulations, at such times and on such terms as may be prescribed by law; and the Legislature shall not have power to grant any relief to the purchasers thereof. The comptroller shall invest the proceeds of such sales, and of those heretofore made, as may be directed by the Board of Education herein provided for, in the bonds of this State, if the same can be obtained, otherwise in United States bonds; and the United States bonds now belonging to said fund shall likewise be invested in State bonds, if the same can be obtained on terms advantageous to the school fund.

SEC. 5. The principal of all bonds and other funds, and the principal arising from the sale of land herein before set apart to said school fund, shall be the permanent school fund, and all the interest derivable therefrom and the taxes herein authorized and levied shall be the available school fund, which shall be applied annually to the support of the public free schools. And no law shall ever be enacted appropriating any part of the permanent or available school fund to any other purpose whatever; nor shall the same or any part thereof ever be appropriated to or used for the support of any sectarian school; and the available school fund herein provided shall be distributed to the several counties according to their scholastic population and applied in manner as may be provided by law.

SEC. 6. All lands heretofore or hereafter granted to the several counties of this State for education, or schools, are of right the property of said counties respectively to which they were granted and title thereto is vested in said counties, and no adverse possession or limitation shall ever be available against the title of any county. Each county may sell or dispose of its lands in whole or in part, in manner to be provided by the Commissioners' Court of the county. Actual settlers residing on said lands shall be protected in the prior right of purchasing the same to the extent of their settlement, not to exceed one hundred and sixty acres, at the price fixed by said court, which price shall not include the value of existing improvements made thereon by such settlers. Said lands and the proceeds thereof, when sold, shall be held by said counties alone as a trust for the benefit of public schools therein; said proceeds to be vested in bonds of the State of Texas, or of the United States, and only the interest thereon to be used and expended annually.

SEC. 7. Separate schools shall be provided for the white and colored children, and impartial provision shall be made for both.

SEC. 8. The governor, comptroller and secretary of state shall constitute a Board of Education, who shall distribute said funds to the several counties and perform such other duties concerning public schools as may be prescribed by law.

SEC. 9. All lands heretofore granted for the benefit of the Lunatic, Blind, Deaf and Dumb, and Orphan Asylums, together with such donations as may have been or may hereafter be made to either of them, respectively, as indicated in the several grants, are hereby set apart to provide a permanent fund for the support, maintenance and improvement of said asylums. And the Legislature may provide for the sale of the lands and the investment of the proceeds in manner as provided for the sale and investment of school lands in section 4 of this Article.

SEC. 10. The Legislature shall, as soon as practicable, establish, organize and provide for the maintenance, support and direction of a university of the first class, to be located by a vote of the people of this State, and styled "The University of Texas," for the promotion of literature, and the arts and sciences, including an agricultural and mechanical department.

SEC. 11. In order to enable the Legislature to perform the duties set forth in the foregoing section, it is hereby declared that all lands and other property heretofore set apart and appropriated for the establishment and maintenance of "The University of Texas," together with all the proceeds of sales of the same, heretofore made or hereafter so to be made, and all grants, donations and appropriations that may hereafter be made by the State of Texas or from any other source, shall constitute and become a permanent university fund. And the same as realized and received into the treasury of the State (together with such sums, belonging to the fund, as may now be in the treasury), shall be invested in lands of the State of Texas, if the same can be obtained; if not, then in United States bonds, and the interest accruing thereon shall be subject to appropriation by the Legislature to accomplish the purpose declared in the foregoing section, provided, that one-tenth of the alternate sections of the lands granted to railroads, reserved by the State, which were set apart and appropriated to the establishment of "The University of Texas," by an act of the Legislature of February 11, 1868, entitled "An Act to establish 'The University of Texas,'" shall not be included in or constitute a part of the permanent school fund.

SEC. 12. The land herein set apart to the University fund shall be sold under such regulations, at such times, and on such terms, as may be provided by law, and the legislature shall provide for the prompt collection, at maturity, of all debts due on account of University lands, heretofore sold, or that may hereafter be sold, and shall in neither event have the power to grant relief to the purchasers.

SEC. 13. The Agricultural and Mechanical College of Texas, established by an act of the Legislature, passed April 17, 1871, located in the county of Brazos, is hereby made, and constituted a branch of the University of Texas, for instruction in agriculture, the mechanic arts and the natural sciences connected therewith. And the Legislature shall, at its next session, make an appropriation, not to exceed forty thousand dollars, for the construction and completion of the buildings and improvements, and for providing the furniture necessary to put said college in immediate and successful operation.

SEC. 14. The Legislature shall also when deemed practicable, establish and provide for the maintenance of a College or Branch University for the instruction of the colored youths of the State, to be located by a vote of the people; provided, that no tax shall be levied, and no money appropriated out of the general revenue, either for this purpose or for the establishment and erection of the buildings of the University of Texas.

SEC. 15. In addition to the lands heretofore granted to the University of Texas, there is hereby set apart, and appropriated, for the endowment, maintenance and support of said University and its branches, one million acres of the unappropriated public domain of the State, to be designated and surveyed as may be provided by law, and said lands shall be sold under the same regulations, and the proceeds invested in the same manner as is provided for the sale and investment of the permanent University fund; and the Legislature shall not have power to grant any relief to the purchasers of said lands.