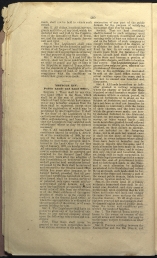 SECTION 1. There shall be one General Land Office in the State, which shall be at the seat of government, where all land titles which have emanated or may hereafter emanate from the State shall be registered, except those titles the registration of which may be prohibited by this Constitution. It shall be the duty of the Legislature at the earliest practicable time to make the Land Office self-sustaining, and from time to time the Legislature may establish such subordinate offices as may be deemed necessary.

SEC. 3. The Legislature shall have no power to grant any of the lands of this State to any railway company except upon the following restrictions and conditions.

First. That there shall never be granted in any such corporation more than sixteen sections to the mile, and no reservation of any part of the public domain for the purpose of satisfying such grant shall ever be made.

Second. That no land certificate shall be issued to such company until they have equipped, constructed and in running order at least ten miles of road and on the failure of such company to comply with the terms of its charter, or to alienate its land at a period to be fixed by law; in no event to exceed twelve years from the issuance of the patent, all said land shall be forfeited to the State and become a portion of the public domain, and liable to location and survey. The Legislature shall pass general laws only, to give, effect to the provisions of this section.

SEC. 4. No certificate for land shall be sold at the Land Office except to actual settlers upon the same, and in lots not to exceed one hundred and sixty acres.

SEC. 5. All lands heretofore or hereafter granted to railway companies, where the charter or law of the State required or shall hereafter require their alienation within a certain period, on pain of forfeiture, or is silent on the subject of forfeiture, or is silent on the subject of forfeiture, and which lands have not been or shall not hereafter be alienated, in conformity with the terms of their charters, and the laws under which the grants were made, are hereby declared forfeited to the State and subject to pre-emption, location and survey, as other vacant lands. All lands heretofore granted to said railroad companies to which no forfeiture was attached, on their failure to alienate, are not included in the foregoing clause, but in all such last named cases it shall be the duty of the attorney general, in every instance where alienations have been or hereafter may be made, to inquire into the same, and if such alienation has been made in fraud of the rights of the State, and is colorable only, the real and beneficial interest being still in such corporation, to institute legal proceedings in the county where the seat of government is situated to forfeit such lands to the State, and if such alienation be judicially ascertained to be fraudulent and colorable as aforesaid, such lands shall be forfeited to the State and become a part of the vacant public domain, liable to pre-emption, location and survey.

SEC. 6. To every head of a family without a homestead, there shall be donated one hundred and sixty acres of public land, upon condition that he will select and locate said land, and occupy the same three years and pay the office fees due thereon. To all single men of eighteen years of age and upwards, shall be donated eighty acres of public land, upon the terms and conditions prescribed for heads of families.

SEC. 7. The State of Texas hereby releases to the owner or owners of the soil all mines and minerals that may be on the same, subject to taxation as other property.

SEC. 8. Persons residing between the Nueces river and the Rio Grande and owning grants which emanated from the government of Spain, or that of Mexico which grants have been recognized and validated by the State, by acts of the Legislature, approved February 10, 1862, August 16, 1870, and other sets, and who have been prevented from complying with the requirements of said acts by the unsettled condition of the country, shall be allowed until the first day of January, 1880, to complete their surveys, and the plots thereof, and to return their field notes to the General Land Office; and all claimants failing to do so shall be forever barred; provided, nothing in this section shall be so construed as to validate any titles not already valid, or to interfere with the rights of third persons.