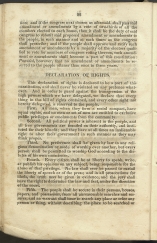 This Declaration of Rights is declared to be a part of this Constitution, and shall never be violated on any pretence whatever. And in order to guard against the transgression of the high powers which we have delegated, we declare that every thing in this bill of rights contained, and every other right not hereby delegated, is reserved to the People.

First. All men, when they form a social compact, have equal rights, and no man or set of men are entitled to exclusive public privileges or emoluments from the community.

Second. All political power is inherent in the People, and all free governments are founded on their authority, and instituted for their benefit; and they have at all times an inalienable right to alter their government in such manner as they may think proper.

Third. No preference shall be given by law to any religious denomination or mode of worship over another, but every person shall be permitted to worship God according to the dictates of his own conscience.

Fourth. Every citizen shall be at liberty to speak, write, or publish his opinions on any subject, being responsible for the abuse of that privilege. No law shall ever be passed to curtail the liberty of speech or of the press; and in all prosecutions for libels, the truth may be given in evidence, and the jury shall have the right to determine the law and fact, under the direction of the court.

Fifth. The People shall be secure in their persons, houses, papers, and possessions, from all unreasonable searches or seizures, and no warrant shall issue to search any place or seize any person or thing, without describing the place to be searched or the person or thing to be seized, without probable cause, supported by oath or affirmation.

Sixth. In all criminal prosecutions the accused shall have the right of being heard, by himself, or council, or both; he shall have the right to demand the nature and cause of the accusation, shall be confronted with the witnesses against him, and have compulsory process for obtaining witnesses in his favor. And in all prosecutions by presentment or indictment, he shall have the right to a speedy and public trial, by an impartial jury; he shall not be compelled to give evidence against himself, or be deprived of life, liberty, property, but by due course of law. And no freeman shall be holden to answer for any criminal charge, but on presentment or indictment by a grand jury, except in the land of naval forces, or in the militia when in actual service in time of war or public danger, or in cases of impeachment.

Seventh. No citizen shall be deprived of privileges, outlawed, exiled, or in any manner disfranchised, except by due course of the law of the land.

Eighth. No title of nobility, hereditary privileges or honors, shall ever be granted or conferred in this Republic. No person holding any office of profit or trust shall, without the consent of Congress, receive from any foreign state any present, office, or emolument, of any kind.

Ninth. No person, for the same offence, shall be twice put in jeopardy of life or limbs. And the right of trial by jury shall remain inviolate.

Tenth. All persons shall be bailable by sufficient security unless for capital crimes, when the proof is evident or presumption strong; and the privilege of the writ of "habeas corpus" shall not be suspended, except in case of rebellion or invasion the public safety may require it.

Eleventh. Excessive bail shall not be required, nor excessive fines imposed, or cruel or unusual punishments inflicted. All courts shall be open, and every man for any injury done him in his lands, goods, person, or reputation, shall have remedy by due course of law.

Twelfth. No person shall be imprisoned for debt in consequence of inability to pay.

Thirteenth. No person's particular services shall be demanded, nor property taken or applied to public use, unless by the consent of himself or his representative, without just compensation being made therefor according to law.

Fourteenth. Every citizen shall have the right to bear arms in defence of himself and the Republic. The military shall at all times and in all cases be subordinate to the civil power.

Fifteenth. The sure and certain defence of a free people is a well-regulated militia; and it shall be the duty of the Legislature to enact such laws as may be necessary to the organizing of the militia of this Republic.

Sixteenth. Treason against this Republic shall consist only in levying war against it, or adhering to its enemies, giving them aid and support. No retrospective or ex post facto law, or laws impairing the obligations of contracts shall be made.

Seventeenth. Perpetuities or monopolies are contrary to the genius of a free government, and shall not be allowed; nor shall the law of primogeniture or entailments ever be in force in this Republic.

The foregoing Constitution was unanimously adopted by the Delegates of Texas, in Convention assembled, at the town of Washington, on the seventeenth day of March, in the year of our Lord one thousand eight hundred and thirty-six, and of the Independence of the Republic, the first year.

In witness whereof, we have hereunto subscribed our names.

I do hereby certify that I have carefully compared the foregoing Constitution, and find it to be a true copy from the original filed in the archives of the Convention.