Preamble - Article I: Powers of the Government

CONSTITUTION OF THE REPUBLIC OF TEXAS. 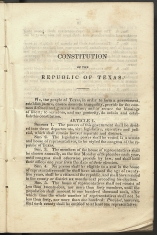 We, the People of Texas, in order to form a Government, establish justice, ensure domestic tranquility, provide for the common defence and general welfare; and to secure the blessings of liberty to ourselves, and our posterity, do ordain and establish this Constitution.

SECTION 1. The powers of this Government shall be divided into three departments, viz: Legislative, Executive and Judicial, which shall remain forever separate and distinct.

SEC. 2. The Legislative power shall be vested in a Senate and House of Representatives, to be styled the Congress of the Republic of Texas.

SEC. 3. The members of the House of Representatives shall be chosen annually, on the first Monday of September each year, until Congress shall otherwise provide by law, and shall hold their offices one year from the date of their election.

SEC. 4. No person shall be eligible to a seat in the House of Representatives until he shall have attained the age of twenty-five years, shall be a citizen of the Republic, and shall have resided in the county or district six months next preceding his election.

SEC. 6. The House of Representatives shall choose their speaker and other officers, and shall have the sole power of impeachment.

SEC. 7. The Senators shall be chosen by districts, as nearly equal in free population (free negroes and Indians excepted,) as practicable; and the number of Senators shall never be less than one third nor more than one half the number of Representatives, and each district shall be entitled to one member and no more.

SEC. 8. The Senators shall be chosen for the term of three years, on the first Monday in September; shall be citizens of the Republic, reside in the district for which they are respectively chosen at least one year before the election; and shall have attained the age of thirty years.

SEC. 11. The Senate shall choose all other officers of their body, and a President pro tempore, in the absence of the Vice President, or whenever he shall exercise the office of President; shall have the sole power to try impeachments, and when sitting as a court of impeachment, shall be under oath; but no conviction shall take place without the concurrence of two thirds of all the members present.

SEC. 12. Judgment in cases of impeachment shall only extend to removal from office, and disqualification to hold any office of honor, trust or profit under this Government; but the party shall nevertheless be liable to indictment, trial, judgment and punishment according to law.

SEC. 13. Each House shall be the judge of the elections, qualifications and returns of its own members. Two thirds of each House shall constitute a quorum to do business, but a smaller number may adjourn from day to day, and may compel the attendance of absent members.

SEC. 14. Each House may determine the rules of its own proceedings, punish its members for disorderly behavior, and with the concurrence of two thirds, may expel a member, but not a second time for the same offence.

SEC. 15. Senators and Representatives shall receive a compensation for their services, to be fixed by law, but no increase of compensation, or diminution, shall take effect during the session at which such increase or diminution shall have been made. They shall, except in case of treason, felony, or breach of the peace, be privileged from arrest during the session of Congress, and in going to and returning from same; and for any speech or debate in either House they shall not be questioned in any other place.

SEC. 16. Each House may punish, by imprisonment, during the session, any person not a member, who shall be guilty of any disrespect to the House, by any disorderly conduct in their presence.

SEC. 17. Each House shall keep a journal of its proceedings, and publish the same, except such parts as in its judgment require secrecy. When any three members shall desire the yeas and nays on any question, they shall be entered on the journals.

SEC. 18. Neither House, without the consent of the other, shall adjourn for more than three days, nor to any other place than that in which the two Houses may be sitting.

SEC. 19. When vacancies happen in either House, the Executive shall issue writs of election to fill such vacancies.

SEC. 20. No bill shall become a law until it shall have been read on three several days in each House, and passed by the same, unless, in cases of emergency, two thirds of the members of the House where the bill originated shall deem it expedient to dispense with the rule.

SEC. 21. After a bill shall have been rejected, no bill containing the same substance shall be passed into a law during the same session.

SEC. 24. No holder of public monies or collector thereof, shall be eligible to a seat in either House of Congress, until he shall have fully acquitted himself of all responsibility, and shall produce the proper officer's receipt thereof. Members of either House may protest against any act or resolution, and may have such protest entered on the journals of their respective Houses.

SEC. 26. Every act of Congress shall be approved and signed by the President before it becomes a law; but if the President will not approve and sign such act, he shall return it to the House in which it shall have originated, with his reasons for not approving the same, which shall be spread upon the journals of such House, and the bill shall then be reconsidered, and shall not become a law unless it shall then pass by a vote of two thirds of both Houses. If any act shall be disapproved by the President, the vote on the reconsideration shall be recorded by ayes and noes. If the President shall fail to return a bill within five days (Sundays excepted) after it shall have been presented for his approval and signature, the same shall become a law, unless the Congress prevent its return within the time above specified by adjournment.

SEC. 27. All bills, acts, orders, or resolutions, to which the concurrence of both Houses may be necessary, (motions or resolutions for adjournment excepted,) shall be approved and signed by the President, or being disapproved, shall be passed by two thirds of both Houses, in manner and form as specified in section twenty.