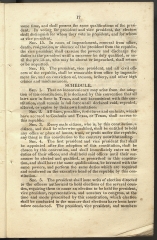 SEC. 1. That no inconvenience may arise from the adoption of this Constitution, it is declared by this Convention that all laws now in force in Texas, and not inconsistent with this Constitution, shall remain in full force until declared void, repealed, altered, or expire by their own limitations.

SEC. 2. All fines, penalties, and forfeitures, and escheats, which have heretofore accrued to Coahuila and Texas, or Texas, shall accrue to this Republic.

SEC. 3.Every male citizen who is by this Constitution a citizen, and shall be otherwise qualified shall be entitled to hold any office of place of honor, trust, or profit, under the Republic, any thing in this Constitution to the contrary notwithstanding.

SEC. 5. The President shall issue writs of election directed to the officers authorized to hold elections of the several counties, requiring them to cause an election to be held for President, Vice President, Representatives and Senators to Congress, at the time and mode prescribed by this Constitution, which election shall be conducted in the manner that elections have been heretofore conducted. The President, Vice President, and members of Congress, when duly elected, shall continue to discharge the duties of their respective offices for the time and manner prescribed by this Constitution, until their successors be duly qualified.

SEC. 7. Until the first enumeration shall be made, as described by the Constitution, the Senatorial districts shall be composed of the following precincts: Bexar shall be entitled to one Senator; San Patricio, Refugio, and Goliad, one; Brazoria one; Mina and Gonzales one; Nacogdoches one; Red River one; Shelby and Sabine one; Washington one; Matagorda, Jackson, and Victoria, one; Austin and Colorado one; San Augustine one; Milam one; Jasper and Jefferson one; and Liberty and Harrisburg one Senator.

SEC. 8. All judges, sheriffs, commissioners, and other civil officers shall remain in office, and in the discharge of the powers and duties of their respective offices, until there shall be others appointed or elected under the Constitution.