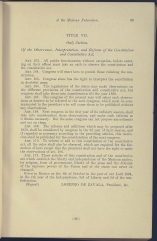 Article 163. All public functionaries without exception, before entering on their offices must take an oath to observe the constitution and their constitutive act.

Article 164. Congress will enact laws to punish those violating the constitution.

Article 165. Congress alone has the right to interpret the constitution in doubtful cases.

Article 166. The legislatures of the states may make observations on the different provisions of the constitution and constitutive act, but congress shall take them into consideration till the year 1830.

Article 167. The congress of the present year will select such observations as deserve to be referred to the next congress, which must be communicated to the president who will cause them to be published without any observation.

Article 168. Next congress in the first year of its ordinary session, shall take into consideration these observations, and make such reforms as it thinks necessary. But the same congress can not propose amendments and act on them.

Article 169. The reforms and additions which may be proposed after 1830, shall be considered by congress in the 2d year of their session, and if regarded as necessary according to the preceding articles, this resolution shall be published for the consideration of the next congress.

Article 170. To reform or add to this constitution or the constitutive act, all the rules shall also be observed, which are required for the formation of laws except that the president shall not have the right to make the observations of article 106.

Article 171. Those articles of this constitution and of the constitutive act which establish the liberty and independence of the Mexican nation, its religion, form of government, liberty of the press and the division of the supreme powers of the Union and of the states can be never be changed.

Given in Mexico on the 4th of October in the year of our Lord 1824, in the 4th year of Independence, 3d of Liberty and 2d of the confederation.