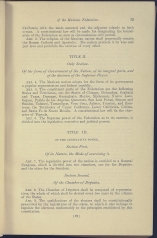 Of the form of Government of the Nation, in its integral parts, and of the division of the Supreme Power.

Article 4. The Mexican nation adopts for the form of its government a popular representative and federal republic.

Article 6. The Supreme power of the Federation as to its exercise, is divided into the legislative, executive and judicial powers.