THE FEDERAL CONSTITUTION OF THE UNITED MEXICAN STATES, SANCTIONED BY THE GENERAL CONSTITUENT CONGRESS ON THE 4TH OF OCTOBER, 1824. 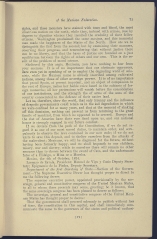 First Secretary of State.
Section of the Government.

The Supreme Executive Power has thought proper to direct to me the following decree:

The Supreme Executive Power, appointed provisionally by the sovereign, general and constitutive Congress of the United Mexican States, to all to whom these presents may come, greeting; be it KNOWN, that the same Sovereign Congress has been pleased to decree as follows:

The sovereign, general and constitutive congress of the United Mexican States has thought proper to decree:

That the government shall proceed solemnly to publish without loss of time, the Constitution in this capital, and shall immediately communicate the same to the governors of the states and political authorities in order to enable them to do the same in all the towns within their limits.

The Supreme Executive Power shall regard it as understood, and take the necessary measures to carry it into effect, causing it to be printed, published and circulated. Mexico 4th October, 1824. Lorenzo Zavala, President; Manuel de Viya y Cosio, Deputy Secretary; Epigmenio de la Piedra, Deputy Secretary.

In consequence we enjoin on all tribunals, justices, commanders, governors and other authorities as well civil as military and ecclesiastical, of whatever class and dignity, that they observe and cause to be observed, accomplished and executed this present decree in all its parts. You will therefore hold it understood for its execution and take suitable dispositions to have it printed, published and circulated.

Which is made known to you for your information and its accomplishment.--May God preserve you many years.