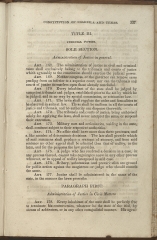 Administration of Justice in general.

ART. 168. The administration of justice in civil and criminal cases shall exclusively belong to the tribunals and courts of justice which agreeably to the constitution should exercise the judicial power.

ART. 169. Neither congress, or the governor can remove cases pending from an inferior to a superior court; nor can tribunals and courts of justice themselves open those already concluded.

ART. 170. Every inhabitant of the state shall be judged by competent tribunals and judges, established prior to the act by which he is judged, and in no way by special commission, or retroactive law.

ART. 171. The laws shall regulate the order and formalities to be observed in suits at law. These shall be uniform in all the courts of justice and tribunals, and no authority can dispense therewith.

ART. 172. The tribunals and courts of justice, being authorised solely for applying the laws, shall never interpret the same, or suspend their execution.

ART. 173. Military men and ecclesiastics, residing in the state, shall continue subject to their respective authorities.

ART. 174. No affair shall have more than three processes, and a like number of determinate decisions. The law shall provide which of said sentences shall produce a warrant of attorney, and from said sentence no other appeal shall be admitted than that of nullity, in the form, and for the purposes the law provides.

ART. 175. A judge who has rendered a decision in a case, in any process thereof, cannot take cognizance anew in any other process whatever, or in appeal of nullity interposed in said case.

ART. 176. Bribery, subornation and prevarication are ground for public action against the magistrate or judge who should commit the same.

ART. 177. Justice shall be administered in the name of the state, in the manner the laws prescribe.

Administration of Justice in Civil Matters.

ART. 178. Every inhabitant of the state shall be perfectly free to terminate his controversies, whatever be the state of the trial, by means of arbitrators, or in any other extrajudicial manner. His agreements in this particular shall be strictly observed, and the decisions of arbitrators executed, should the parties on making the mutual promise not reserve the right of appeal.

ART. 179. Cases of a small amount shall be terminated by executive measures which shall be executed without any recourse. A particular law shall fix the sum and mode of proceeding therein.

ART. 180. In other civil and criminal matters in respect to wrongs there shall be a trial by conciliation, and without proving that this means has been attempted a trial by writing cannot be established except in cases which the law itself shall determine.

Administration of Justice in Criminal Matters.

ART. 181. All criminal actions, for light transgressions that should be punished by correctional penalties, shall be decided by executive judgment without the form or shape of trial, and from the result no appeal, or any other recourse can be interposed. The law shall assign said penalties, and determine the crimes to which they correspond.

ART. 182. In grave offences summary information of the fact shall be drawn up authoritatively, without which requisite and that of the corresponding consequent warrant that shall be notified in the accused, and a copy thereof communicated to the jailor, no person can be a prisoner.

ART. 183. Should the judges not be able immediately to fulfil the provision of the preceding articles, the person arrested shall not be considered a prisoner but in the light of one detained, and should the jail warrant not be made known to him within forty-eight hours, and communicated to the jailor, he shall be discharged.

ART. 184. A person who gives bail in said cases, wherein it is not expressly prohibited by law, shall not be taken to prison, and in whatever state of the cause it appears that corporal penalty cannot be imposed on the prisoner, he shall be released under bail.

ART. 185. Those who have to declare in criminal matters upon their own actions shall do so without being under oath.

ART. 186. All persons may arrest a delinquent in the act, and conduct him to the presence of the judge.

ART. 187. The greatest care shall be taken that the jails serve only for securing, and not for molesting the accused.

ART. 188. Criminal causes shall be public, in the manner and form the laws provide, as soon as it is proposed to receive the declaration of the accused in reply to the charges.

ART. 189. The confiscation of property shall forever be prohibited, and even the seizure thereof can only be effected on proceeding in crimes involving a pecuniary reponsibility, and only in proportion thereto.

ART. 190. Torture and compulsion shall never be used, and penalties imposed, whatever be the crimes, shall never pass to the family of him who suffers them, but they shall have their effect solely upon the person who deserved them.

ART. 191. No authority of the state can issue a mandate for searching the houses, papers, and other effects of the inhabitants thereof, except in those cases, and in the form, the laws provide.

ART. 192. One of the main objects of attention of congress shall be to establish the trial by jury in criminal cases, to extend the same gradually, and even to adopt it in civil cases in proportion as the advantages of this valuable institution become practically known.

ART. 193. The inferior courts of justice shall continue in the manner and form that shall be prescribed by law, until in the judgement of congress the state rents permit the establishment of learned judges, who shall be appointed in each district.

ART. 194. In the capital of the state there shall be a supreme tribunal divided into three halls, each composed of the magistrate or magistrates whom the law designated, and said tribunal shall have a fiscal, who shall despatch all the subjects of the three halls. Should the hall consist of one minister only, said special law shall determine whether colleagues should be appointed, and the manner and form it shall be done.

ART. 195. The first two halls shall take cognizance in the second and third processes of civil cases, of inferior courts of justice, and also of criminal cases according as the laws determine.

Third,--Take cognizance in all compulsive appeals interposed from the ecclesiastical tribunals and authorities of the state.

Fourth,--Examine the lists that shall be transmitted to the same monthly, of causes pending in first, second and third processes communicate a copy thereof to the governor, and provide for their publication through the press.

Fifth,--Hear doubts of law that occur to the two first halls, and to the primary tribunals, and communicate them to congress, through the channel of the governor, accompanied by the corresponding report.

ART. 197. Actions for transgressions in office entered against inferior judges, and also those formed for crimes of the same kind, and those in general against the deputies of congress, the governor and vice governor, counsellors, secretary of state, and members of the tribunal of justice shall be opened and closed in all their processes before the said supreme tribunal. The law shall mark out the other powers of the same and its respective halls.

ART. 198. In case an action ought to be entered against the whole tribunal, or any of its halls, congress shall appoint another special tribunal, composed of the corresponding halls and the latter of the magistrate or magistrates considered necessary.

ART. 199. The special tribunal appointed by congress for these cases shall take cognizance of all appeals of nullity in actions of the supreme tribunal of justice, in those of the individuals mentioned in the preceding article, and in subjects pertaining to the third hall.

ART. 200. To be a magistrate or fiscal it shall be required to be a citizen in the exercise of his rights over twenty-five years of age, a native of this republic, and an upright and enlightened lawyer.

ART. 201. Both magistrates and fiscal shall be appointed by congress on nomination by the executive. They shall receive a competent salary, to be designated by law, and cannot be removed from office, except from a legally established cause.

ART. 202. The members of the supreme tribunal of justice shall be responsible for all their proceedings in the discharge of their functions, and may be accused therefor before congress by any individual of the people whatever.