CONSTITUTION OF THE STATE OF COAHUILA AND TEXAS. 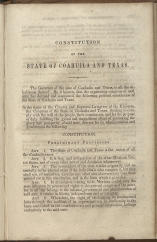 In the name of the Creator and Supreme Lawgiver of the Universe, the Congress of the State of Coahuila nd Texas, desiring to comply with the will of the people, their constituents, and for the purpose of duly fulfilling the grand and magnificent object of promoting the glory and prosperity of said state, decrees for its administration and government the following

ART. 1. The State of Coahuila and Texas is the union of all Coahuiltexanos.

ART. 2. It is free and independent of the other Mexican United States, and of every other power and dominion whatsoever.

ART. 3. The sovereignty of the state resides originally and essentially in the general mass of individuals who compose it, but they shall not, of themselves, exercise any other acts of sovereignty than those pointed out in this constitution, and in the form which it provides.

ART. 4. In all subjects relating to the Mexican confederacy the state delegates its powers and rights to the general congress of the same, but in all that belongs to the internal government and administration of said state, it retains its liberty, independence and sovereignty.

ART. 5. Wherefore, the right of establishing its fundamental laws through the medium of its representatives, in conformity to the basis established in the constitutive act and general constitution, belongs exclusively to the said state.

ART. 6. The territory of the state is the same as that embraced in the provinces formerly know by the names of Coahuila and Texas. A constitutional law shall mark out its limits, in respect to the adjoining states, of the Mexican Confederacy.

ART. 7. For the better administration thereof, the territory of the state shall for the present be divided into three departments as follows, --viz:

Bexar,--Embracing all the territory corresponding to what was called province of Texas, which shall form one sole district.

Monclova,--Consisting of the district of the same name, and that of Rio Grande.

Saltillo,--Comprehending the district of the same name, and that of Parras.

ART. 8. Hereafter congress may alter, vary, and modify this division of the territory of the state as it shall judge most conducive to the felicity of the people.

ART. 9. The Roman Catholic Apostolic Religion shall be the religion of the state. The state protects it by wise and just laws, and prohibits the exercise of any other.

ART. 10. The state shall regluate and pay all expense that should be necessary for the preservation of religious worship, agreeably to the concordates the nation should ratify with the Apostolic See, and to the laws that shall be prescribed on the exercise of the patronato throughout the republic.

ART. 11. Every man who resides within the limits of the state, although but transiently, shall enjoy the imprescritible rights of liberty, security, property and equality; and it is the duty of said state to preserve and protect by wise and equitable laws, these universal rights of men.

ART. 12. The state is also obligated to protect all its inhabitants in the exercise of the right which they possess of writing, printing and freely publishing their sentiments and political opinions, without the necessity of any examination, or critical review previous to their publication, under the responsibility and restrictions that are now, or shall be hereafter established by the general laws on the subject.

ART. 13. From and after the promulgation of the constitution in the capital of each district, no one shall be born a slave in the state, and after six months the introduction of slaves under any pretext shall not be permitted.

ART. 14. In return, all men who inhabit the state shall obey its laws, respect its constituted authorities, and contribute to its support in the manner it requires.

ART. 15. All kinds of vacant property within its limits, and all intestate property without a legal successor, shall belong to the state.

ART. 16. The state shall be composed solely of two classes of persons,--viz. Coahuiltexanos, and citizens of Coahuila and Texas.

ART. 17. The following persons shall be Coahuiltexians:

First,--All men born and domiciled in the territory of the state, and the children of the same.

Second,--All those born in any other part of the territory of the republic, who shall fix their residence in the state.

Third,--Foreigners, of whatever nation, now legally established in the state.

Fourth,--Foreigners, who obtain from congress letters of citizenship, or become domiciliated in the state according to the law that shall be enacted as soon as the general congress issues the general Nuturalization Law, which, agreeably to the 27th prerogative conferred by the constitution of the republic, ought to be established.

ART. 18. The following shall be freemen of Coahuila and Texas.

First,--All men born in the state and domiciliated in any part of the territory thereof.

Second,--All citizens of the other states and territory of the republic, as soon as they are domiciliated in the state.

Third,--All sons of Mexican citizens, born without the territory of the republic, who establish their domicil in the state.

Fourth,--Foreigners, from whatever country, now legally domiciliated in the state.

Fifth,--Foreigners, now enjoying the rights of Coahuiltexanos, who shall obtain special certificates of citizenship from congress. The laws shall prescribe the qualifications and conditions for granting them the same.

ART. 19. Those born within the territory of the republic, and foreigners domiciliated therein (except minors) when the political liberties of the country were proclaimed, who did not remain true to the cause of its independence, but emigrated to a foreign country, or dependency of Spain, shall neither be Coahuiltexiana, nor citizens of Coahuila and Texas.

ART. 20. The rights of citizenship shall be forfeited:

Second,--By admitting office, pension, or title from a foreign government without permission from congress.

Fourth,--By a person selling his vote, or buying that of another for himself, or a third person, whether in popular assemblies or in any other; and by violation of public trust in the said assemblies, whether by presidents, secretaries, tellers, or those discharging any other public function.

Fifth,--By having resided five years in succession without the territory of the republic, without a commission from the general government of that of the state, or without license from the latter.

ART. 21. A person who forfeits the rights of a citizen cannot recover the same, unless reinstated therein by congress.

ART. 22. The exercise of the said rights shall be suspended.

Second,--For not having attained the age of twenty one years, except married persons, who shall enjoy the said rights from the time they marry, whatever be their age.

Fourth,--For being under criminal prosecution, until acquitted or sentenced to a punishment not corporal or disgraceful.

Fifth,--For having no employment, trade, or know way of support.

Sixth,--For not being able to read and write, but this provision shall not take effect until after the year 1850, and with respect to those who shall enter on the exercise of the rights of citizens after that time.

ART. 23. Only for the causes specified in articles 20 and 22 shall the rights of citizenship be forfeited or suspended.

ART. 24. None but citizens in the exercise of their rights shall vote for officers of the state in cases designated by law, and such only shall be elected to the said officers, and all others of the state.

ART. 25. Offices requiring persons belonging to any professional faculty shall be excepted from the latter part of the preceding article, and may be conferred upon persons not residing in the state.

FORM OF GOVERNMENT OF THE STATE.

ART. 26. The object of the government shall be the happiness of the individuals who compose it, since the end of every political society is no other than the wellbeing of its members.

ART. 27. The officers of the government clothed with any kind of authority are mere agents or delegates of the state, responsible to the same for their political conduct.

ART. 28. The federal republican shall be the form of government of the state. In pursuance thereof there shall be no hereditary office of privilege in the state.

ART. 29. The supreme powers of the state shall be divided for its exercise into legislative, executive and judicial, and neither these three powers, or any two of the same, shall ever be united in one corporation or person, nor shall the legislative be deposited in one individual alone.

ART. 30. The exercise of the legislative power shall reside in a congress composed of deputies, chosen by the people.

ART. 31. The executive power shall reside in a citizen, to be styled the governor of the state, and to be chosen by the people.

ART. 32. The exercise of the judicial power shall reside in the tribunals and courts of justice established by this constitution.