Article XVII: Mode of Amending the Constitution of this State 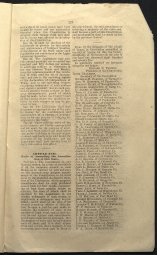 Mode of Amending the Constitution of this State.

SECTION 1. The Legislature, at any biennial session, by a vote of two-thirds of all the members elected in each House, to be entered by yeas and nays on the journals, may propose amendments to the Constitution, to be voted upon by the qualified electors for members of the Legislature, which proposed amendments shall be duly published once a week for four weeks, commencing at least three months before an election, the time of which shall be specified by the Legislature, in one weekly newspaper of each county, in which such a newspaper may be published; and it shall be the duty of the several returning officers of said election, to open a poll for, and make returns to the secretary of state, of the number of legal votes cast at said election for and against said amendments; and if more than one be proposed, then the number of votes cast for and against each of them; and if it shall appear from said return, that a majority of the votes cast have been cast in favor of any amendment, the said amendment so receiving a majority of the votes cast, shall become a part of this Constitution, and proclamation shall be made by the governor thereof.

Done by the delegates of the people of Texas, in Convention assembled, in the city of Austin, on this, the twenty-fourth day of November, in the year of our Lord one thousand eight hundred and seventy-five.

EDWARD B. PICKETT,
President of the Convention.

LEIGH CHALMERS,
Secretary of the Convention

I, A. W. DEBERRY, Secretary of State for the State of Texas, do hereby certify that the above and foregoing pages contain, and are true and correct copies of all the articles of the proposed Constitution of the State of Texas, as enrolled and now on file in the Department of State.