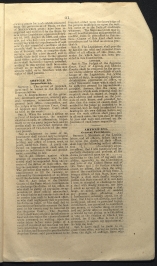 SECTION 1. The power of impeachment shall be vested in the House of Representatives.

SEC. 2. Impeachment of the governor, lieutenant governor, attorney general, treasurer, commissioner of the general land office, comptroller, and the judges of the Supreme Court, Court of Appeals and District Court shall be tried by the senate.

SEC. 3. When the senate is sitting as a Court of Impeachment, the senators shall be on oath, or affirmation, impartially to try the party impeached, and no person shall be convicted without the concurrence of two-thirds of the senators present.

SEC. 4. Judgment in cases of impeachment shall extend only to removal from office, and disqualification from holding any office of honor, trust, or profit, under this State. A party convicted on impeachment shall also be subject to indictment, trial and punishment, according to law.

SEC. 5. All officers against whom articles of impeachment may be preferred shall be suspended from the exercise of the duties of their office, during the pendency of such impeachment. The governor may make a provisional appointment to fill the vacancy, occasioned by the suspension of an officer until the decision on the impeachment.

SEC. 6. Any judge of the District Courts of the State who is incompetent to discharge the duties of his office or who shall be guilty of partiality, or oppression, or other official misconduct, or whose habits and conduct are such as to render him unfit to hold such office, or who shall negligently fail to perform his duties as judge, or who shall fail to execute in a reasonable measure the business in his courts, may be removed by the Supreme Court. The Supreme Court shall have original jurisdiction to hear and determine the causes aforesaid when presented in writing upon the oaths taken before some judge of a court of record of not less than ten lawyers, practicing in the courts held by such judge, and licensed to practice in the Supreme Court; said presentment to be founded, either upon the knowledge of the persons making it or upon the written oaths as to the facts of creditable witnesses. The Supreme Court may issue all needful process and prescribe all needful rules to give effect to this section. Causes of this kind shall have precedence and be tried as soon as practicable.

SEC. 7. The Legislature shall provide by law for the trial and removal from office of all officers of this State, the modes for which have not been provided in this Constitution

SEC. 8. The Judges of the Supreme Court, Court of Appeals and District Courts, shall be removed by the governor on the address of two-thirds of each house of the Legislature, for wilful neglect of duty, incompetency, habitual drunkenness, oppression in office, or other reasonable cause which shall not be sufficient ground for impeachment, provided, however, that the cause or causes for which such removal shall be required shall be stated at length in such address and entered on the journals of each house; and provided further, that the cause or cause shall be notified to the judge so intended to be removed, and he shall be admitted to a hearing in his own defense before any vote for such address shall pass; and in all such cases, the vote shall be taken by yeas and nays and entered on the journals of each house respectively.