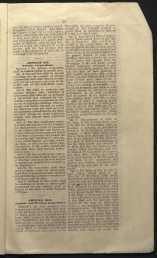 SECTION 1. All fines, penalties, forfeitures and escheats, which have heretofore accrued to the Republic and State of Texas, under their constitutions and laws, shall accrue to the State under this Constitution; and the Legislature shall provide a method for determining what lands have been forfeited, and for giving effect to escheats, and all such rights of forfeiture and escheats to the State shall, ipso facto, enure the protection of the innocent holders of junior titles, as provided in sections 2, 3, and 4 of this Article.

SEC. 2. Any claim of title or right to land in Texas, issued prior to the 13th day of November, 1835, not duly recorded in the county where the land was situated at the time of such record; or not duly archived in the general land office; or not in the actual possession of the grantee thereof, or some person claiming under him, prior to the accruing of junior title thereto from the sovereignty of the soil, under circumstances reasonably calculated to give notice to said junior grantee, has never had, and shall not have, standing or effect against such junior title, or color of title, acquired without such or actual notice of such prior claim of title or right; and no condition annexed to such grants, not archived, or recorded, or occupied as aforesaid, has been, or ever shall be released or waived, but actual performance of all such conditions shall be proved by the person or persons claiming under such title or claim of right in order to maintain action thereon, and the holder of such junior title, or color of title, shall have all the rights of the government which have heretofore existed, or now exist, arising from the non-performance of all such conditions.

SEC. 3. Non-payment of taxes on any claim of title to land, dated prior to the 18th day of November, 1835, not recorded, or archived, as provided in section 2, by the person or persons so claiming, or those under whom he or they so claim, from that date up to the date of the adoption of this Constitution, shall be held to be a presumption that the right thereto has reverted to the State, and that said claim is a state demand, which presumption shall only be rebutted by payment of all taxes on said lands, State, county, and city or town, to be assessed on the fair value of such lands by the comptroller, and paid to him, without commutation or deduction for any part of the above period.

SEC. 4. No claim of title or right to land, which issued prior to the 13th day of November, 1835, which has not been duly recorded in the county where the land was situated at the time of such record, or which has not been duly archived in the General Land Office, shall ever hereafter be deposited in the General Land Office, or recorded in this State, or delineated on the maps, or used as evidence in any of the courts of this State, and the same are stale claims; but this shall not affect such rights or presumptions as arise from actual possession. By the words "duly recorded," as used in sections 2 and 4 of this Article, it is meant that such claim of title or right to land shall have been recorded in the proper office, and that mere errors in the certificate of registration, or informality, not affecting the fairness and good faith of the holder thereof, with which the record was made, shall not be held to vitiate such record.

SEC. 5. All claims, locations, surveys, grants and titles, of any kind, which are declared null and void by the Constitution of the Republic or State of Texas, are, and the same shall remain forever null and void.

SEC. 6. The Legislature shall pass stringent laws for the detection and convictions of all forgers of land titles, and may make such appropriations of money for that purpose as may be necessary.

SEC. 7. Sections 2, 3, 4 and 5 of this Article, shall not be so construed as to set aside or repeal any law or laws of the Republic or State of Texas, releasing the claimants of headrights of colonists of a league of land, or less, from compliance with the conditions on which their grants were made.