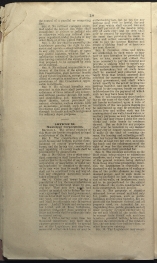 SECTION 1. The several counties of this State are hereby recognized as legal subdivisions of the State.

SEC. 4. Cities and towns having a population of ten thousand inhabitants or less, may be chartered alone by general law. They may levy, assess and collect an annual tax to defray the current expenses of their local government, but such tax shall never exceed, for any one year, one-fourth of one per cent. and shall be collectable only in current money. And all license and occupation tax levied, and all fines, forfeitures, penalties and other dues accruing to cities and towns shall be collectable only in current money.

SEC. 5. Cities having more than ten thousand inhabitants may have their charters granted or amended by special act of the Legislature, and may levy, assess and collect such taxes as may be authorized by law, but no tax for any purpose shall ever be lawful for any one year, which shall exceed two and one-half per cent. of the taxable property of such city, and no debt shall ever be created by any city, unless at the same time provision be made to assess and collect annually a sufficient sum to pay the interest thereon and create a sinking fund of at least two per cent. thereon.

SEC. 6. Counties, cities and towns are authorized, in such mode as may now or may hereafter be provided by law, to levy, assess and collect the taxes necessary to pay the interest and provide a sinking fund to satisfy any indebtedness heretofore legally made and undertaken; but all such taxes shall be assessed and collected separately from that levied, assessed and collected for current expenses of municipal government, and shall when levied specify in the act of levying the purpose therefor, and such taxes may be paid in the coupons, bonds or other indebtedness for the payment of which such tax may have been levied.

SEC. 7. All counties and cities bordering on the coast of the Gulf of Mexico are hereby authorized, upon a vote of two-thirds of the tax-payers therein (to be ascertained as may be provided by law) to levy and collect such tax for construction of sea walls, breakwaters, or sanitary purposes, as may be authorized by law, and may create a debt for such works and issue bonds in evidence thereof. But no debt for any purpose shall ever be incurred in any manner by any city or county, unless provision is made at the time of creating the same, for levying and collecting a sufficient tax to pay the interest thereon and provide at least two per cent. as a sinking fund; and the condemnation of the right of way for the erection of such works shall be fully provided for.

SEC. 8. The counties and cities on the Gulf coast, being subject to calamitous overflows, and a very large proportion of the general revenue being derived from those otherwise prosperous localities, the Legislature is especially authorized to aid by donation of such portion of the public domain as may be deemed proper, and in such mode as may be provided by law, the construction of sea walls, or breakwaters, such aid to be proportioned to the extent and value of the works constructed, or to be constructed, in any locality.

SEC. 9. The property of counties, cities and towns owned and held only for public purposes, such as public buildings and the sites therefor, fire engines and the furniture thereof, and all property used, or intended for extinguishing fires, public grounds and all other property devoted exclusively to the use and benefit of the public shall be exempt from forced sale and from taxation; provided, nothing hereto shall prevent the enforcement of the vendor's lien, the mechanic's or builder's lien, or other liens now existing.

SEC. 10. The Legislature may constitute any city or town a separate and independent school district. And when the citizens of any city or town have a charter, authorizing the city authorities to levy and collect a tax for the support and maintenance of a public institution of learning, such as may hereafter be levied and collected, if, at an election held for that purpose, two-thirds of the tax payers of such city or town shall vote for such tax.