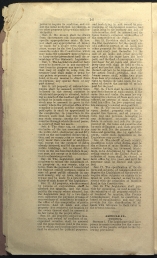 SECTION 1. The Legislature shall have power to create counties for the convenience of the people, subject to the following provisions:

First. In the territory of the State exterior to all counties now existing, no new counties shall be created with a less area than nine hundred square miles, in a square form, unless prevented by pre-existing boundary lines. Should the State lines render this impracticable in border counties, the area may be less. The territory referred to may, at any time, in whole or in part, be divided into counties in advance of population, and attached, for judicial and land surveying purposes, to the most convenient organized county or counties.

Second. Within the territory of any county or counties not existing no new county shall be created with a less area than seven hundred square miles, nor shall any such county now existing be reduced to a less area than seven hundred square miles. No new counties shall be created so as to approach nearer than twelve miles of the county seat of any county from which it may, in whole or in part, be taken. Counties of a less area than nine hundred, but of seven hundred or more square miles, within counties now existing may be created by a two-thirds vote of each house of the Legislature, taken by yeas and nays, and entered on the journals. Any county now existing may be reduced to an area of not less than seven hundred square miles by a like two-thirds vote. When any part of a county is stricken off and attached to or created into another county, the part stricken off shall be holden for and obliged to pay its proportion of all the liabilities then existing of the county from which it was taken, in such manner as may be prescribed by law.

Third. No part of any existing county shall be detached from it and attached to another existing county until the proposition for such change shall have been submitted, in such manner as may be provided by law, to a vote of the electors of both counties, and shall have received a majority of those voting on the question in each.

SEC. 2. The Legislature shall pass laws regulating the manner of removing county seats, but no county seat situated within five miles of the geographical centre of the county shall be removed, except by a vote of two-thirds of all the electors voting on the subject. A majority of such electors, however, voting at such election, may remove a county seat from a point more than five miles from the geographical centre of the county to a point within five miles of such centre, in either case the centre to be determined by a certificate from the commissioner of the general land office.