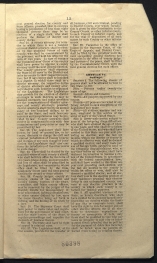 SECTION 1. The following classes of persons shall not be allowed to vote in this State, to wit:

First--Persons under twenty-one years of age.

Third--All paupers supported by any county.

Fourth--All persons convicted of any felony, subject to such exceptions as the Legislature may make.

Fifth--All soldiers, marines and seamen, employed in the service of the army or navy of the United States.

SEC. 3. All qualified electors of the State, as herein described, who shall have resided for six months immediately preceding an election within the limits of any city or corporate town, shall have the right to vote for mayor and all other elective officers; but in all elections to determine expenditure of money or assumption of debt, only those shall be qualified to vote who pay taxes on property in said city or incorporated town; provided, that no poll tax for the payment of debts thus incurred, shall be levied upon the persons debarred from voting in relation thereto.

SEC. 4. In all elections by the people the vote shall be by ballot, and the Legislature shall provide for the numbering of tickets and make such other regulations as may be necessary to detect and punish fraud and preserve the purity of the ballot box; but no law shall ever be enacted requiring a registration of the voters of this State.

SEC. 5. Voters shall, in all cases, except treason, felony or breach of the peace, be privileged from arrest during their attendance at elections, and in going to and returning therefrom.