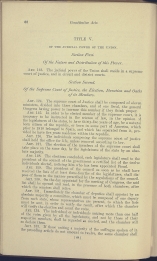 OF THE JUDICIAL POWER OF THE UNION.

Of the Nature and Distribution of this Power.

Article 123. The judicial power of the Union shall reside in a supreme court of justice, and in circuit and district courts.

Of the Supreme Court of Justice, the Election, Duration and Oaths of its Members

Article 124. The supreme court of Justice shall be composed of eleven ministers, divided into three chambers, and of one fiscal, the general Congress having power to increase this number if they think proper.

Article 125. In order to be elected member of the supreme court, it is necessary to be instructed in the science of law, in the opinion of the legislatures of the states, to have thirty-five years of age, be a natural born citizen of the republic, or born in some part of America, which prior to 1810 belonged to Spain, and which has separated from it, provided he have five years residence within the republic.

Article 126. The individuals composing the supreme court of justice shall hold the office for life, unless removed according to law.

Article 127. The election of members of the supreme court of justice shall take place on the same day, by the legislatures of the state by an absolute majority.

Article 128. The elections concluded, each legislature shall send to the president of the council of the government a certified list of the twelve individuals elected, noticing him who has been appointed Fiscal.

Article 129. The president of the council as soon as he shall have received the lists of at least three-fourths of the legislatures, shall dispose of them in the manner prescribed by the regulations of the council.

Article 130. On the day appointed for the meeting of Congress, the said list shall be opened and read, in the presence of both chambers, after which the senators shall retire.

Article 131. Immediately the chamber of deputies shall appoint by an absolute majority a committee, which must be composed of one deputy from each state, whose representatives are present, to which the lists must be sent, in order to verify the result, after which the chamber will verify the election and count the votes.

Article 132. The individual or individuals uniting more than one half of the votes given by all the legislatures, and not by those of their respective members, shall be regarded as elected, and the chamber will so declare them.

Article 133. If those uniting a majority of the suffrages spoken of in the preceding article do not amount to twelve, the same chamber shall elect successively among the individuals who have obtained the greatest number of votes of the legislatures, observing in relation to such election, what has been prescribed in the first section of Title IV, which treats of the election of President and Vice-President.

Article 134. If a senator or deputy be elected minister or fiscal of the supreme court, he will prefer such election.

Article 135. When a vacancy occurs in the supreme court, it shall be filled agreeably to the provisions of this section, information having been previously given to the governors and legislatures of the states.

Article 136. The members of the supreme court, before entering into office, shall take the following oath before the president of the republic; "Ye swear by God our Lord to conduct yourselves faithfully and legally in the discharge of the duties confided to you by the nation, and if you act thus God will reward you, if not, punish you." 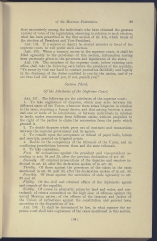 Of the Attributes of the Supreme Court.

Article 137. The following are the attributes of the supreme court:

1st. To take cognisance of disputes, which may arise between the different states of the Union, whenever there arises litigation in relation to the same, requiring a formal decree, and that arising between a state and one or more of its inhabitants, or between individuals in relation to lands, under concessions from different states, without prejudice to the right of the parties to claim the concession from the party which granted it.

2d. To decide disputes which grow out of contracts and transactions between the supreme government and its agents.

3d. To consult upon the acceptance or refusal of papal bulls, letters and rescripts, granted on litigated points.

4th. Decide on the competency of the tribunals of the Union, and on conflicting jurisdictions between them and the state tribunals.

Firstly. Of accusations against the president and vice-president according to articles 38 and 39, after the previous declaration of article 49.

Secondly. Of criminal prosecutions of the deputies and senators indicated in article 43, after the declaration spoken of in article 44.

Thirdly. Of those against the governors of the states in the cases mentioned in article 38, 3d part, after the declaration spoken of in article 40.

Fourthly. Of those against the secretaries of state agreeably to articles 38 and 40.

Fifthly. Of the civil and criminal affairs of the diplomatic agents and consuls of the republic.

Sixthly. Of causes in admiralty, prizes by land and water, and contraband; of crimes committed on the high seas; of offences against the united Mexican nation; of the officers of the treasury and justice of the Union; of infractions against the constitution and general laws, according to the dispositions of law.

Article 138. It shall be determined by law, in what manner the supreme court shall take cognisance of the cause mentioned in this section. 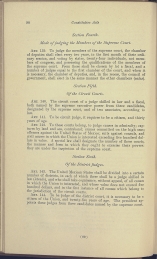 Mode of judging the Members of the Supreme Court.

Article 139. To judge the members of the supreme court, the chamber of deputies shall elect every two years, in the first month of their ordinary session, and voting by states, twenty-four individuals, not members of congress, and possessing the qualifications of the members of the supreme court. From these shall be chosen by lot a fiscal, and a number of judges equal to the first chamber of the court, and when it is necessary, the chamber of deputies, and, in the recess, the council of government, shall elect in the same manner the other chambers (salas).

Of the Circuit Courts.

Article 140. The circuit court of a judge skilled in law and a fiscal, both named by the supreme executive power from three candidates, designated by the supreme court, and of two associates, according to law.

Article 141. To be circuit judge, it requires to be a citizen, and thirty years of age.

Article 142. To these courts belong, to judge causes in admiralty; captures by land and sea, contraband; crimes committed on the high seas; offences against the United States of Mexico; suits against consuls, and civil causes in which the Union is interested exceeding five hundred dollars in value. A special law shall designate the number of these courts, the manner and form in which they ought to exercise their powers: they are under the inspection of the supreme court.

Of the District Judges.

Article 143. The United Mexican States shall be divided into a certain number of districts, in each of which there shall be a judge skilled in law (letrado), and who shall take cognisance, without appeal, of all causes in which the Union is interested, and whose value does not exceed five hundred dollars, and in the first instance of all causes which belong to the jurisdiction of the circuit courts.

Article 144. To be judge of the district court, it is necessary to be a citizen of the Union, and twenty-five years of age. The president appoints these judges from three candidates named by the supreme court. 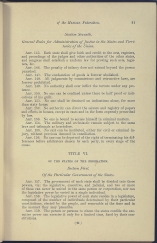 General Rules for Administration of Justice in the States and Territories of the Union.

Article 146. The penalty of infamy does not extend beyond the person punished.

Article 147. The confiscation of goods is forever abolished.

Article 148. All judgments by commissions and retroactive laws, are forever prohibited.

Article 149. No authority shall ever inflict the torture under any pretence.

Article 150. No one can be confined unless there be half proof or indications of his guilt.

Article 151. No one shall be detained on indications alone, for more than sixty hours.

Article 152. No authority can direct the seizure and registry of papers and effects in houses, except in cases and in the form expressly prescribed by law.

Article 153. No one is bound to accuse himself in criminal matters.

Article 154. The military and ecclesiastic remain subject to the same laws and tribunals as heretofore.

Article 155. No suit can be instituted, either for civil or criminal injury, without previous demand in conciliation.

Article 156. No one can be deprived of the right of terminating his differences before arbitrators chosen by each party, in every stage of the cause.