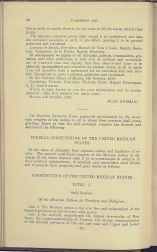 In the name of almighty God, supreme author and legislator of society. The general constituent congress of the Mexican nation in discharge of the duties imposed upon it by its constituents in order to fix their political independence, to establish and consolidate their liberty and to promote their prosperity and glory decree as follows:

CONSTITUTION OF THE UNITED MEXICAN STATES.

Of the Mexican Nation, its Territory and Religion.

ARTICLE 1. The Mexican nation is for ever free and independent of the Spanish government and of every other power.

Article 2. Its territory comprehends the former vice-royalty of New Spain, the captain-generalship of Yucatan, the former commandancies of the internal provinces of the East and West and Upper and Lower California with the lands annexed and the adjacent islands in both oceans. A constitutional law will be made for designating the boundaries of the Federation as soon as circumstances will permit.

Article 3. The religion of the Mexican nation shall perpetually remain the Roman Catholic and Apostolic. The nation protects it by wise and just laws and prohibits the exercise of any other.

Title I, Only Section, Article 1-2