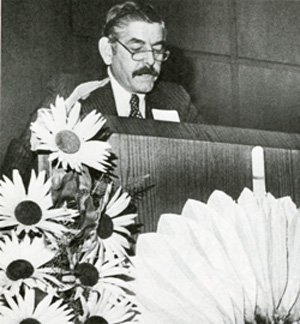 The Sunflower Ceremony provides a unique opportunity for the Dean, professors, and other Law School administrators to say a few words to the Law School’s new graduates.  As then Acting Associate Dean for Academic Affairs and later Dean M. Michael Sharlot did in 1983, the speakers usually urge graduates to be thankful, successful, and upstanding lawyers and alumni.

Speakers frequently recognize and thank the friends and family that have supported law students during their education.

Numerous guest speakers, including judges, esteemed alumni, and even former Texas Governor Ann Richards, have addressed the Sunflower Ceremony as well.  The focus of the commencement speech has changed over the years.  In previous decades, the speech recognized an award or honor bestowed by the University of Texas School of Law.  In modern times, guest speakers, selected for their impressive accomplishments, simply share some of their wisdom with the new graduates.

Remarks by Paul A. McDermott on the Fiftieth Anniversary of the 1911 Class (PDF)