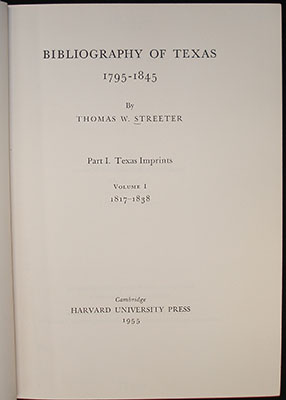 The great bibliographer of early Texas imprints was Thomas W. Streeter (1883-1965). Streeter’s interest in Texas printing began as a hobby. After five years of collecting he conceived the idea of continuing the work of Henry Wagner, The Spanish Southwest, 1536-1794, for Texas imprints. A very part time project from 1927 to 1939, the project became more central to Streeter upon his retirement from the oil industry. Due to the sheer scope of the undertaking, the bibliography took twenty-seven years to complete. The monumental multi-volume Bibliography of Texas, 1795-1845 was released in 1955 and has never been surpassed.

Thomas Streeter’s personal collection of over 2000 Texas imprints was purchased by the Beinecke Library, Yale University in 1957. The material was transferred in lots as he completed work on his bibliography and represents the largest collection of Texana outside of the University of Texas.