In 1818 about 400 Bonapartist refugees from France, some with families, settled on the Trinity River near modern Liberty, Texas, forming the colony, Le Champ d’Asile – the field of asylum. 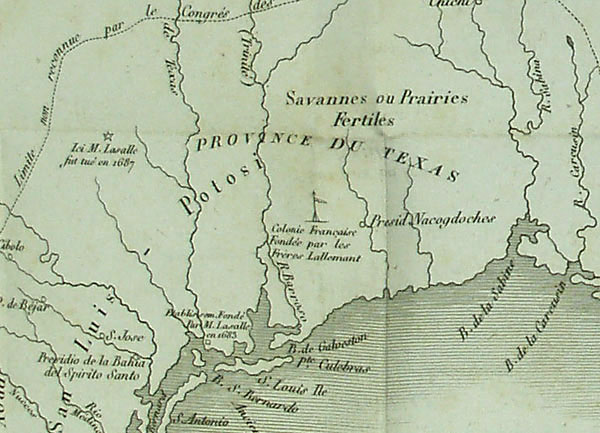 The colony lasted only six months – being disbanded in July 1818.  The surviving colonists were absorbed into the francophone community in New Orleans. 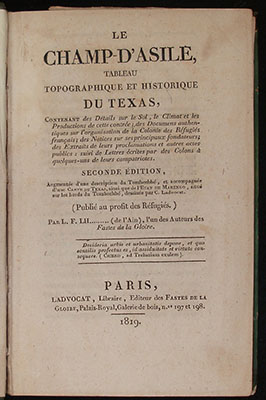 Although the colony itself had no particular impact, the fact that it ever existed at all had profound international repercussions.  The realization that an armed group had settled in Texas prompted the signing of several treaties establishing the borders of the United States, Mexico, and Louisiana.

This work is one of three largely fictitious accounts of the founding of the French colony, complete with spurious documents. The key themes are Bourbon oppression of imperial heroes, romance, and savage American Indians. A sentimentalized Champ d'Asile inspired French attachment to Texas, which later contributed to France becoming the first European power to recognize the Republic of Texas as a country.

The First Laws of the Republic 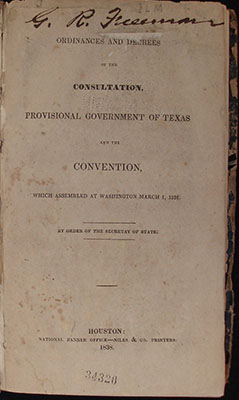 On March 1, 1836, a Convention formed at Washington on the Brazos to formally sever ties with Mexico and establish a provisional government, including a functioning judiciary. It is at this moment that the confusing jumble of legal antecedents that make up Texas law first came together. Criminal law, its associated writs, and trial by jury were to be governed by the laws of England. Probate was based on the Civil Code of Louisiana, which was ultimately Spanish in origin. Officers of the Ayuntamientos – the Mexican municipal council – including sheriffs and alcaldes (magistrates) continued to function as they had under Mexican law. All unfinished litigation was to be completed under the laws of the state of Coahuila and Texas. It is interesting that the authors felt it necessary at this very early point to include the provision that no attorney was to practice law before having been examined by three practicing attorneys in his jurisdiction, unless previously licensed by a superior court of the United States. Large portions of this slim volume are dedicated to preparing for war.

A Promotional History of Texas

David B. Edward. The History of Texas: or, The Emigrant's, Farmer's, and Politician's Guide to the Character, Climate, Soil and Productions of that Country: Geographically Arranged from Personal Observation and Experience. Cincinnati: Stereotyped and published by J.A. James & Co., 1836. 18 cm. Modern gold-tooled calf.

The material for this book was drawn from an expedition in which Edward participated in 1830. He provides a good physical description of the area, and accounts of the towns and products found there. He included a copy and analysis of the colonization laws, as well as extracts from many important documents – some of which have survived nowhere else. The work contains one of the few English translations of the Mexican Federal Constitution of 1824, and the complete text of the proposed constitution of 1833. 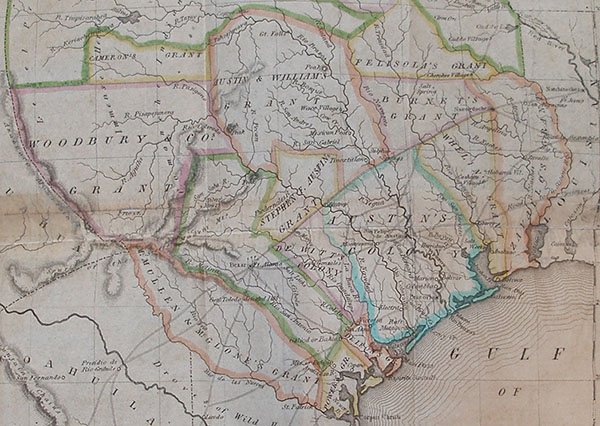 The spectacular lithographed map was one of the last elements included in the book – it includes a reference to the death of Benjamin Milam at the storming of Bexar in December, 1835, so could not have been printed before January 1836. The work’s pro-Mexican slant upset most Texans.

Thomas W. Streeter, the great bibliographer of early Texas imprints, considered this work to be one of the essential Texas books. 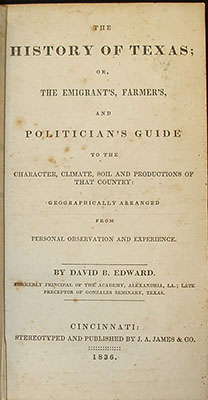 David Burnett Edward (1797–1870) was a native of Scotland. After immigrating to the United States in 1819, he served as an educator, first at the Academy of Alexandria, Louisiana, and later as preceptor of the Gonzales Seminary in the DeWitt Colony. He had made liberal use of several authors without attribution, and this combined with his unflattering assessment of the Anglo community in Texas, made him and his work quite unpopular. It is believed that at or around the time of the Texas Revolution, he and his family left Texas, ultimately ending up in Ohio.

John Quincy Adams Against the Annexation of Texas 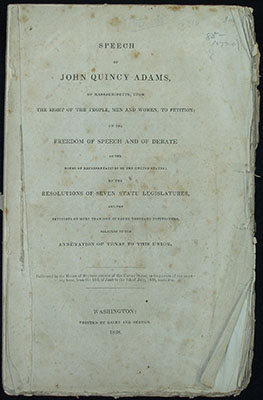 When Texas managed to wrest free of Mexican sovereignty, most of the inhabitants were in favor of joining the United States. The United States government, however, had been embroiled in a pro-slavery/anti-slavery debate for years. Both the Whigs and the Democrats were reluctant to admit a large, somewhat lawless, slaveholding territory into the Union and further disrupt an unsteady détente. Congressional resolutions for the annexation of Texas had been presented a number of times, but were uniformly defeated by filibuster in both houses.

This particular speech by John Quincy Adams was in response to a resolution to annex Texas introduced on April 16, 1838 by Mr. Ebenezer Shields representing the Legislature of Tennessee. The Legislature of Massachusetts submitted a counter resolution on May 21, 1838. The second resolution, with an assortment of petitions and other correspondence were forwarded to the Committee on Foreign Affairs, which never examined them. This oversight provided Adams with the ammunition he needed to effectively derail the annexation resolution.

Legacy Laws from the State of Coahuila 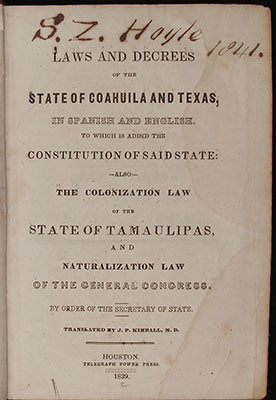 The need for an English translation of the laws of Coahuila and Texas had been recognized as early as 1835,well before the founding of the Republic, but the lack of a translator delayed the project. The vast majority of the settlers in the Austin colony spoke and read English only. Since all transactions with the Mexican government had to be undertaken in Spanish, it placed a huge burden on the few bilingual inhabitants of the region, as well as providing opportunities for misunderstanding. The local alcaldes (magistrates) rarely could read the laws they were charged with enforcing.

The manuscript from which the translation was produced was a haphazard collection of laws and decrees compiled by José María de Jésus Carbajal. Carbajal was bilingual and had represented the colony in Saltillo. Although Carbajal remained neutral in the struggle for Texas independence, he ultimately relocated to Mexico. He appears to have sold his compilation to the Texas government around 1837. The work was ultimately translated by Dr. John Kimball of Galveston for a remuneration of $2000. The initial print run was two thousand copies, issued in two parts, and the work became the standard reference work for any matter to which prior law applied. The last instance in which the Kimball translation was cited by the Texas Supreme Court was 1994.

[Texas.] Laws of the Republic of Texas. Houston: Printed at the Office of the Telegraph, 1838. 21 cm. Contemporary paper wrappers lacking.

On December 10, 1835, the General Council of the provisional government issued a call for an election on February 1, 1836, to choose delegates to assemble on March 1 at Washington-on-the-Brazos. The initial assembly met on March 1, 1836. On March 2, the delegates signed the Texas Declaration of Independence (based closely on the United States’ Declaration of Independence), and so formed the Republic of Texas. The First Texas Congress assembled at Columbia on October 3, 1836, with fourteen senators and twenty-nine representatives. 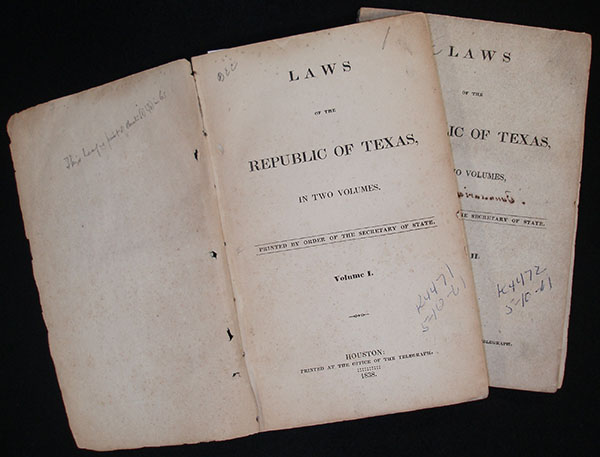 This is the second printing of the laws of the first session – the very rare first printing appeared the year before, in 1837. This copy was rebound to include pages for note-taking.

A Sammelband of the Laws of the Republic of Texas

This is one of several large sammelbands (books bound together) of Republic laws.  This version contains the session laws for the first through the ninth congress, as well as an index.

This copy was a gift of the Ralph Yarborough Estate.

[Texas.] Journal of the House of Representatives of the Republic of Texas.  Regular Session of the Third Congress, Nov. 5, 1838. Houston: Intelligencer’s Office, 1839. 23 cm. Half sheep over boards. 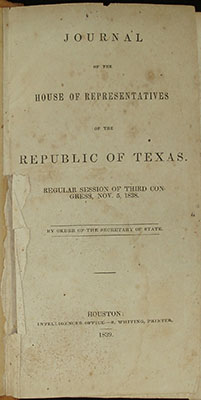 Members of the House were elected annually on the first Monday in September, and served a one-year term. A member had to be twenty-five or older, a citizen of the Republic, and a resident of his district for six months. The House chose its speaker and had sole power of impeachment.

Although Tarlton is fortunate to have complete sets of the Republic Session Laws, the two volumes displayed represent our entire collection of Republic House and Senate Journals.

Journals of the Senate

[Texas.] Journals of the Senate of the Called Session of Congress Convened at the City of Houston, on the 25th day of September, 1837 and of the Regular Session, on the Sixth Day of November, 1837. Houston: National Banner Office, 1938.
21 cm. Half sheep over boards. 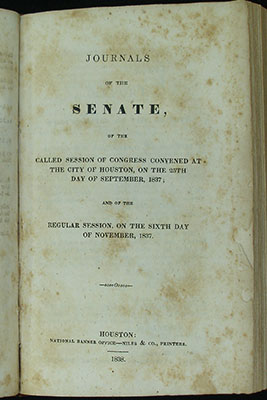 The Senate was chosen by districts and was to have a membership numbering "not less than one-third nor more than one-half that of the House," according to the Constitution. A senate district was represented by only one member. A senator had to be thirty or older, a citizen of the Republic, and a resident of his district for one year. Senators were elected to three year terms, with one-third of the members being elected each year.

The first Legislature, convened at Columbia on October 3, 1836, was made up of thirty Representatives and fourteen Senators. The Republic of Texas had nine congresses in total.

During this period, journals of the House and Senate were published in relatively small print runs of 500. They are as a result scarce. There are senate journals for five different sessions of Congress in this one volume. The poor quality paper has not aged well and shows much foxing. Additionally, the journal for the first congress appears to have been used to prop up a table some time before it was bound with the other volumes, and is damaged. 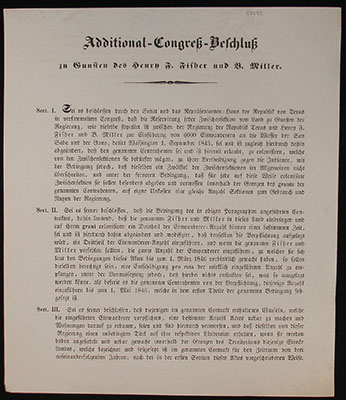 Congressional resolution from the Texas legislature in regard to German settlements organized by the Society for the Protection of German Emigrants in Texas.

Nineteenth-century legal materials in Texas were published in a variety of formats and several languages. The most common formats were as a book or pamphlet in paper wrappers, as a newspaper announcement, and as broadsides. Languages of publication included not only English and Spanish, but also German, Czech, and Norwegian.

Message from the President on the
Annexation of Texas

James K. Polk. Message from the President of the United States to Two Houses of Congress, at the Commencement of the First Session of the Twenty-Ninth Congress. Washington: Printed by Ritchie and Heiss, 1845. 22 cm. Modern buckram. 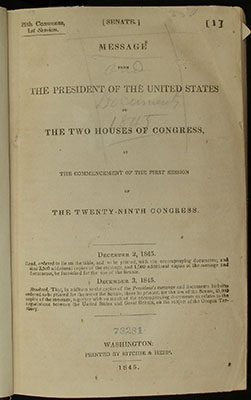 The president’s message triumphantly welcomes Texas to the Union, although the work behind the annexation was that of his predecessor, President John Tyler. Polk claimed that the annexation peacefully extended US jurisdiction to the Rio Grande – a statement that precipitated war with Mexico the following year.

The annexation, first proposed a decade earlier, finally came to fruition due to a flagging economy in Texas, and US suspicion that Great Britain was attempting to interfere with slavery in Texas – slavery having been the primary argument against Texas annexation.

[Texas.] Constitution of the State of Texas, adopted in Convention, at the City of Austin, 1845. Austin: Printed at the Office of the ‘New Era’, 1845. 21 cm. Contemporary sheep. 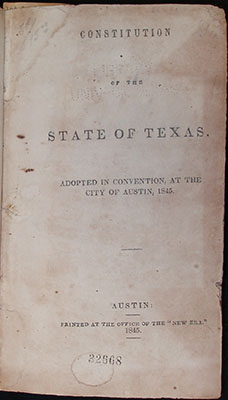 This is the first of three English editions of the first state constitution of Texas, the other two were printed by the Houston Telegraph Office later in the same year. It was issued nearly simultaneously with an edition in Spanish. Although the document dates the constitution to August 27, it was not actually ratified by the president of the Convention of 1845, Thomas Jefferson Rusk, until August 28.