Valenti Angelo. The World's Justice: A Parable from the Examples of San Bernardino of Siena. Bronxville, N.Y.: Printed and illuminated by Valenti Angelo, 1960. Bound in handmade paper over boards.

Valenti Angelo (1897-1982) was a printmaker, illustrator and author, born in Massarosa, Italy. 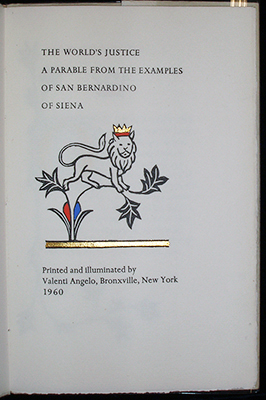 He immigrated to the United States with his family in 1905, living first in New York City then settling in Antioch, California. At the age of nineteen, Angelo moved to San Francisco, working by day as a laborer and educating himself evenings and weekends at libraries and museums. He soon emerged as a versatile artist and an especially skilled engraver and printer. In 1926, Angelo made his first book illustrations for the well-known, San Francisco-based Grabhorn Press. In 1933 he returned to New York as a freelance artist and author. In a period of thirty-four years, Angelo decorated and illustrated roughly 250 books, including this retelling of a parable from one of Saint Bernardino's sermons. The fifteenth-century saint lived most of his life as an itinerant evangelical, preaching against sin. Tarlton's copy is one of fifty copies, printed on a hand-press.

A California Tribute to the Doves Press

Thomas James Cobden-Sanderson. The Ideal Book or Book Beautiful: A Tract on Calligraphy, Printing, and Illustration, and on the Book Beautiful as a Whole. Berkeley, CA.: Ārif Press, 1972.18 x 13 cm. Half calf and decorated paper over boards, gilt-stamped.

T.J. Cobden-Sanderson was the renowned co-founder of the Doves Press in Hammersmith, 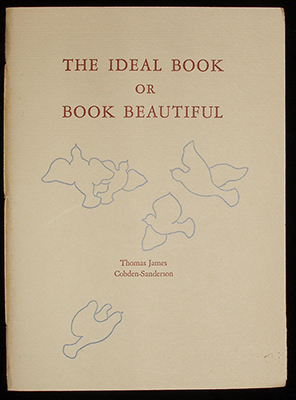 London, and this book is an unabashed tribute to his philosophy and design. The doves on the paper cover by artist Sarah Zelmanovic are near copies of the two doves forming the distinctive watermark the Doves Press used in place of a printer’s device. The typography is also reminiscent of the Doves Press, and the text is Cobden-Sanderson’s own.

Wesley Tanner founded Ārif Press in 1970. After twenty years in the San Francisco Bay Area, Tanner relocated to Ann Arbor, Michigan, in the early 1990s. He then founded Passim Editions with calligrapher and designer Susan Skarsgaard. Tanner is on the faculty of the School of Art and Design at the University of Michigan. Skarsgaard works as a product designer in charge of special projects for General Motors.

The Arion Press of San Francisco

Constitution of the United States: Published for the Bicentennial of its Adoption in 1787. San Francisco: Arion Press in association with the Library of Congress, 1987. 27 x 17 cm.
Bound in vellum, with flat red trim; in blue cloth folder, blue cloth slipcase.

Arion Press is located in San Francisco, California and founded by Andrew Hoyem in 1974. 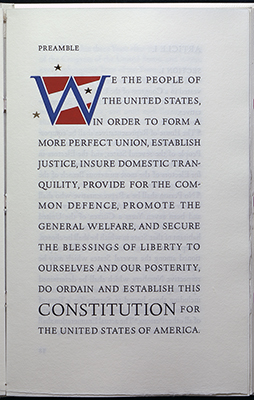 The press creates deluxe, limited-edition books, many of which are illustrated by well-known artists. Arion Press grew out of the Grabhorn-Hoyem Press, which was itself the successor of the Grabhorn Press – all of San Francisco. The press publishes three to four new books each year, in editions of 400 copies or less.

The paper used in this edition of the Constitution of the United States was made by hand especially for this edition by the Twinrocker Mill, Brookston, Indiana. The initial letters were the work of calligrapher Thomas Ingmire.

Jean Chartier. Joan the Maid of Orleans: Being that Portion of the Chronicles of St. Denis which Deals with Her Life and Times. From the Chroniques de France Printed in Paris in 1493. Translated by Pauline B. Sowers; with reproductions of woodcuts from the original edition. San Francisco: Grabhorn Press for Roy Vernon Sowers , 1938. 39 x 26 cm. Printed in two columns of 46 lines. Text in black with headlines, page numbers and marginal notations in red; capitals in red and blue. Quarter linen binding and blue paper over boards. 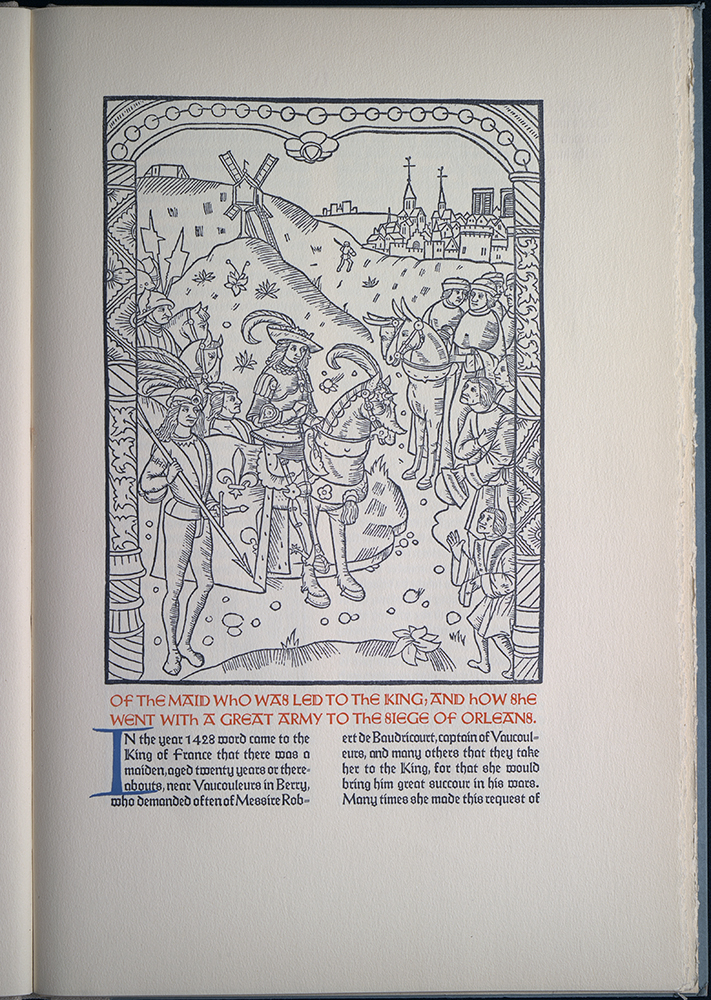 established the Grabhorn Press in San Francisco, California, in 1919, continuing an existing tradition of fine printing in the city. Edwin was the press's business manager, and Robert did the printing and set type. Grabhorn Press operated until 1965.

Saint Louis (1214-1270) commissioned the monks of Saint-Denis to create, in French, the history of the French kings from their mythical origins in Troy to the death of Philip Augustus (1223). The monastery of Saint-Denis and then the court in Paris continued the history. Its final form brought the chronicle down to the death of Charles V in the 1380s. The official history of France between 1122 and 1461, the Grandes Chroniques survives in approximately 130 manuscripts. 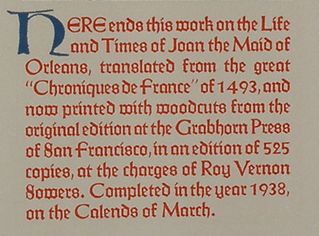 This Grabhorn Press edition consists of an excerpt from the Grandes Chroniques, translated into English, and focusing on Joan of Arc, the Maid of Orleans.

Included with this work is a promotional broadside illustrating key woodcuts and providing samples of the typography. It remains common for fine and private presses to promote their work by means of a printed sample, often in the form of a broadside or sample pages. This promotitional piece combines a specimen page of the opening text, with marginal summaries and running headers – neither of which appear on the printed version of this page in the work. The reverse describes the technical and artistic characteristics of the publication, and includes a brief introduction to the text.

The Laws of Burgos of 1512-1513: Royal Ordinances for the Good Government and Treatment of the Indians. Translated with an introduction and notes by Lesley Byrd Simpson. San Francisco: John Howell Books, 1960. 24 x 17 cm. Bound in gilt-stamped buckram. 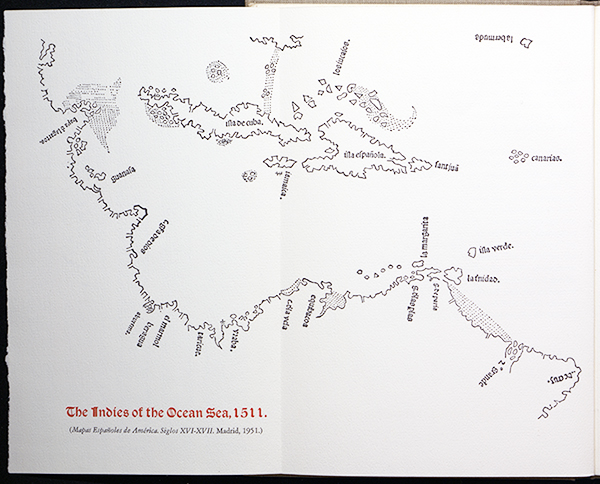 This volume is a translation of a foundational legal treatise concerning the treatment of indigenous peoples by Spanish colonists in the Americas. Leyes de Burgos (Laws of Burgos) was promulgated on December 27, 1512 in Burgos, Spain in an attempt to curb the worst abuses of the Spanish in the New World. It was not applied evenly geographically, nor was it particularly effective.

Lawton Kennedy (1900-1980) designed and printed the work. Kennedy printed books between 1934 and 1972. The sponsor was John Howell (1857-1956). The antiquarian bookstore, John Howell Books promoted fine printing in the San Francisco area from 1912 until the death of Warren Howell, son of John Howell, in 1984. The stock was liquidated at auction, and the Howell business papers went to Stanford University. 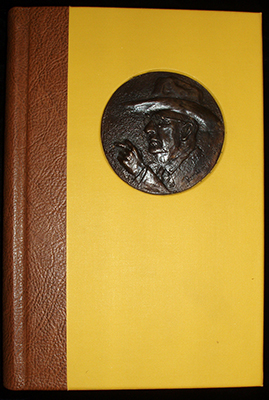 James Darlington Hamlin (1871-1950), Texas agent for the Capitol Syndicate and organizer of the Panhandle-Plains Historical Society, was both a frontier judge, and an avid art collector. Hamlin was also the attorney for the famous XIT Ranch in the Texas Panhandle.

Carl Hertzog (1902-1984) was responsible for the layout and binding design of this biography. In 1948, Hertzog began teaching a course in book design and typography at what is today The University of Texas at El Paso and also started building a college print shop which grew into the Texas Western Press. A basic Hertzog axiom states that both design and materials are always at the service of the subject matter. The cover design includes a bronze portrait by Glenna Goodacre after Datus Myres. 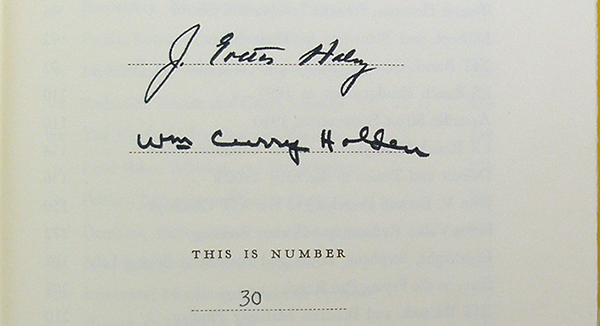 Elbert and Alice Hubbard. Justinian and Theodora: A Drama: Being a Chapter of History and the One Gleam of Light during the Dark Ages. East Aurora, N.Y.: Roycrofters, 1906. 22 x 16 cm. Bound in light red suede with lining of watered silk

Roycroft was an Arts and Crafts community founded by Elbert Hubbard (1856-1915) in 1895 in the village of East Aurora, New York, near Buffalo. When Hubbard was unable to find a publisher for a book, he took inspiration from William Morris's Kelmscott Press, and decided to print the book himself, founding the Roycroft Press. The press was named in honor of the seventeenth-century English printers, Samuel and Thomas Roycroft, and the community that grew up around the print shop took the name from the press.

Elbert Hubbard married suffragette Alice Moore (1861-1915) in 1904, and the couple became leaders in both the suffrage and the American Arts and Crafts movements. Elbert and Alice Hubbard authored several books together, including this one. After the Hubbards died in the sinking of the Lusitania in 1915, the Roycroft community went into a gradual decline, and the business was sold at auction in 1938. It continued under various owners in a limited capacity until it went bankrupt in 1987. 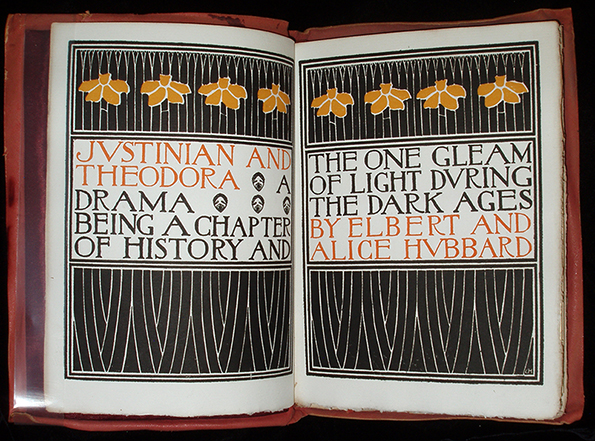 The title page, initials, headers, and tail pieces are the characteristic work of William Joseph “Dard” Hunter (1883-1966). While a member of the Roycroft community from 1904 to 1911, Dard Hunter executed over 150 original graphic designs for books, catalogs and other Roycroft publications. He is responsible for some of the most widely recognized designs of the American Arts and Crafts movement, including the ubiquitous square rose motif and his unique lettering style. 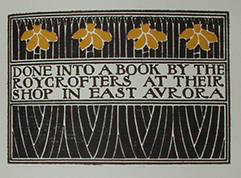 The Roycroft Campus is preserved as a National Historic Landmark in East Aurora.