John Milton. Areopagitica: A Speech of Mr. John Milton for the Liberty of Unlicenc'd Printing to the Parlament of England. Hammersmith: Doves Press, 1907. 24 x 17 cm. Bound in stiff vellum. 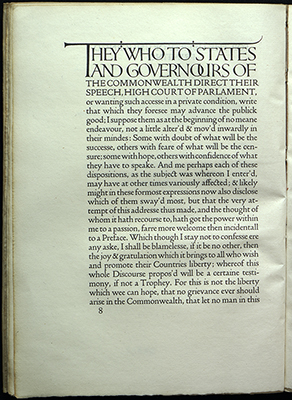 Their self-proclaimed purpose was “to attack the problem of Typography” and produce books made beautiful not by ornamentation, but rather through superb type and artistic layout. Emery Walker designed the Doves type, an amalgam of capital letters based on the type used by Nicolas Jenson and lower case letters suggested by the type of Jacobus Rubeus -- both fifteenth-century printers. Over the next sixteen years, the press printed forty titles in limited print runs, often under 500 copies. Generally thought to be second only to the Kelmscott press in quality, the Doves Press continued to produce books until 1916. All further use of the distinctive typeface ended that year when Cobden-Sanderson threw it into the Thames.

The owners' minimalist aesthetic extended to their printer's device -- a printer's device or "mark" being a design serving as a unique visual identifier. Rather than the ornate and vaguely decadent woodcuts favored by their colleagues, Cobden-Sanderson and Walker marked their imprints virtually invisibly, incorporating a watermark of two doves and their initials into the paper itself. While undeniably elegant, this printer's device is very difficult to capture in a photograph. 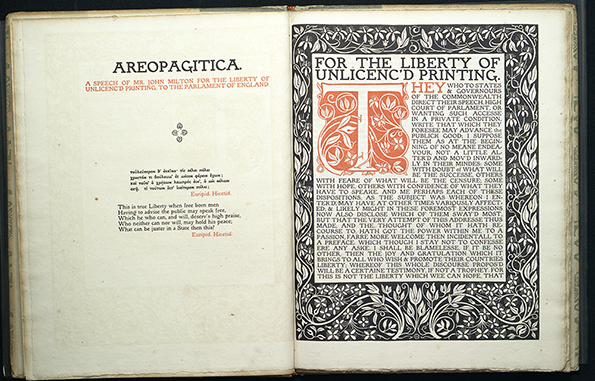 The edition follows closely the text and spelling of the first edition of Aeropagitica printed in 1644, at the height of the English Civil War. The title is taken from a speech written by the Athenian orator Isocrates in the 5th century BC. The Areopagus is a hill in Athens, and was the name of a council whose power Isocrates hoped to restore. In this work, Milton argues against the censorship imposed by the Licensing Order of 1643. This work was popular with fine and private presses, and Tarlton owns several editions, including this Eragny Press edition.

The son of impressionist Camille Pissarro, Lucien Pissarro (1863–1944), and his wife Esther, founded the Eragny Press in 1894. The press was named after the Pissarro family's home town in France. Lucien, a wood engraver, created the illustrations and set type, while Esther did the bookbinding. Friends of Charles Ricketts of the Vale Press, the Pissarros used Vale type for many of their books and collaborated with Ricketts and his publishers on some projects. The press produced over thirty books before it closed in 1914.

The border and initial letters were designed by Lucien Pissarro, while in this case Esther Pissarro engraved them onto woodblocks for printing. This volume boasts heavily decorated borders and an elaborate printed binding.

Theodore Besterman (1904-1976), a notable bibliographer and scholar, established Guyon House Press –named after his Hempstead home – in 1937. The press was destroyed by a bomb in 1940. It is believed that many copies of this work were likewise destroyed.

The medieval English charters include among others: the coronation charter of Henry I (1000); the coronation charter of Henry II (1154); the great charter of 1215 (Magna Carta); and the charter of the forest (1217). The text is in Latin and English, with parallel text on facing pages. The seal of each ruler is reproduced following the charter. Head and tail-pieces designed by Berthold Wolpe, printed and bound by Theodore Besterman assisted by V.H. Ridler and F.J. Coton.

The Statutes of Henry VII in Exact Facsimile: From the Very Rare Original, Printed by Caxton in 1489. Edited, with notes and introduction, by John Rae. London: John Camden Hotten, 1869. 30 x 24 cm. Contemporary half-calf over boards.

Thomas William Caxton (1422-1491) was arguably the greatest English fifteenth-century printer. He established his press in 1476 after an extended stay on the continent, 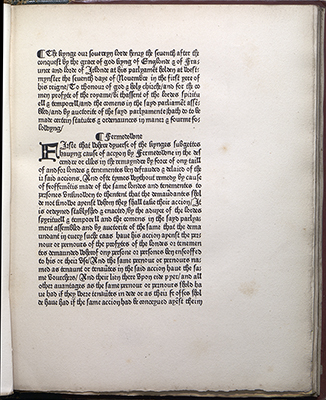 during which he studied printing. Caxton counted among his patrons the Tudor family, and thrived through any number of royal upsets. During his later years Caxton was assisted by Wynkyn de Worde, who ultimately took over his press.

On the other hand, John Camden Hotten (1832-1873) had a poor reputation as publisher. He may have been a blackmailer, and he certainly seems to have exploited his authors. He pirated Mark Twain and Bret Harte, but rescued poet and later prominent author Algernon Charles Swinburne's Poems and Ballads when the original publisher became too frightened to go on due to the erotic nature of some of the poems. Hotten is said to have died from eating too many pork chops. Swinburne, ungratefully, remarked that his death was an argument against cannibalism. Hotten's publishing house was eventually taken over by the publishing house Chatto and Windus.

The entire imprint is an imitation of the efforts of the Roxburghe Club. The Club was founded by a group of wealthy English bookcollectors in 1812 and remains in existence today. One of the expectations of membership became that of underwriting the cost of publishing the facsimile of an important manuscript or a significant bibliography, with accompanying scholarship of outstanding quality. The 1870 review of this work in The Solicitors Journal and Reporter noted that although the facsimile was of the finest quality, the scholarship of the introduction and notes was not. The facsimile was painstakingly reproduced with a series of lithographs printed on custom paper made in Holland. It is bound “in the Roxburghe style.”

The Lion and Unicorn Press

Battista Fiera. De ivsticia pingenda = on the Painting of Justice: a Dialogue between Mantegna and Momus. London: Lion and Unicorn Press, 1957. 23 x 14 cm. Bound in quarter calf and paper.

Battista Fiera (1469-1518) was a Mantuan theologian and humanist. In this allegorical 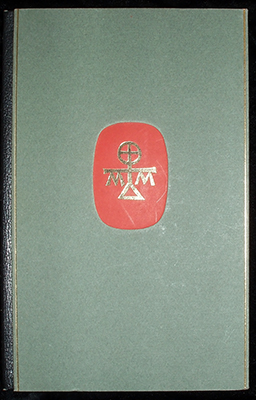 dialogue between the Greek demi-god of mockery and satire, Momus, and the artist, Andrea Mantegna, Battista explored the tension between Renaissance thought and Renaissance art. Mantegna was known to have solicited advice while working on his neoclassical works – in this fictional account, his mandate to personify justice leads him to consult with various scholars, none of whom agree. The Latin work originally appeared in 1504 – the text reprinted in this edition dates from 1515.

Named after the Festival of Britain’s Lion and the Unicorn Pavilion, the Lion and Unicorn Press at the Royal College of Art, London, was established in 1949 with the aim of producing finely designed and typeset printed, bound and illustrated books. The English translation is by James Wardrop, typography is by Ann Hickmott and the binding designed by Brian Young.

The colophon appears below. 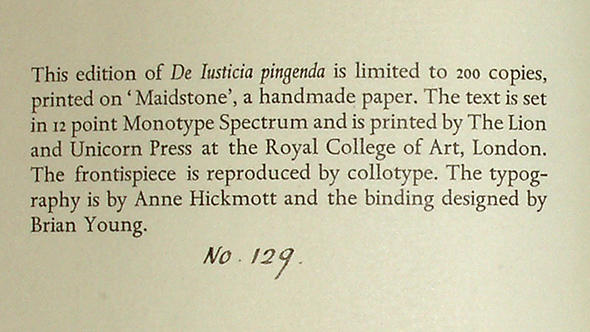 Nonesuch Press took its name from a Tudor palace of the same name. Sir Francis Meynell 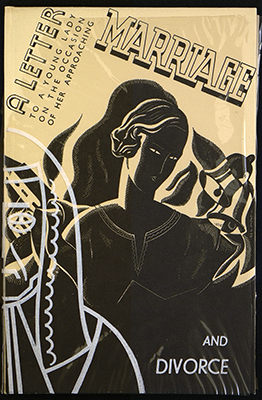 (1891-1975), his wife Vera Wynn Mendel (1895-1947), and David Garnett (1892-1981) founded the private press in London in 1922. The press remained in business until the 1960s. Unlike most private presses, Nonesuch designed the books it published on its own small press, but select commercial firms completed the production. Nonesuch Press followed a policy of publishing only books that were not in print or that existed in inadequate editions or translations, with the goal of providing fine press editions for a wider audience, and for use rather than simply admiration.

In the Nonesuch's edition of A Letter to a Young Lady on Her Approaching Marriage, self-conscious nineteenth-century style typography is combined with a thoroughly avant-garde binding – cream-colored boards with a pictorial woodcut design by Leonard Beaumont – a strong linear graphic with a mylar jacket to complete the design and the title. Although the subject purports to be advice on marriage, the work is in fact a discourse on divorce.