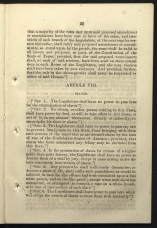 ["SEC. 1. The Legislature shall have no power to pass laws for the emancipation of slaves."]

["SEC. 2. No citizen, or other person residing in this State, shall have power by deed, or will, to take effect in this State, or out of it, in any manner whatsoever, directly or indirectly, to emancipate his slave or slaves."]

["SEC. 3. The Legislature shall have no power to pass any law to prevent immigrants to this State, from bringing with them such persons of the negro race as are deemed slaves by the laws of any of the Confederate States of America; provided, that slaves who have committed any felony may be excluded from this State."]

["SEC. 4. In the prosecution of slaves for crimes of a higher grade than petit larceny, the Legislature shall have no power to deprive them of a trial by jury, except in cases arising under the laws concerning insurrection of slaves."]

["SEC. 5. Any person who shall maliciously dismember, or deprive a slave of life, shall suffer such punishment as would be inflicted in case the like offence had been committed upon a free white person, and on the like proof; except when such slave has committed, or attempted to commit, a rape on a white female, or in case of insurrection of such slave."]

["SEC. 6. The Legislature shall have power to pass laws which will oblige the owners of slaves to treat them with humanity."]