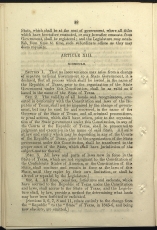 SEC. 4. All fines, penalties, forfeitures and escheats, which have accrued to the Republic of Texas under the Constitution and laws, shall accrue to the State of Texas; and the Legislature shall, by law, provide a method for determining what lands may have been forfeited or escheated.

SEC. 9. It shall be the duty of the President of Texas, immediately after the inauguration of the Governor, to deliver to him all records, public money, documents, archives and public property, of every description whatsoever, under the control of the executive branch of the government; and the Governor shall dispose of the same in such manner as the Legislature may direct.

SEC. 10. That no inconvenience may result from the change of government, it is declared that the laws of this Republic relative to the duties of officers, both civil and military, of the same, shall remain in full force, and the duties of their several offices shall be performed in conformity with the existing laws, until the organization of the government of the State, under this Constitution, or until the first day of the meeting of the Legislature: That then the offices of President, Vice-President, of the President's Cabinet, Foreign Ministers, Charges and agents and others, repugnant to this Constitution, shall be superseded by the same; and that all others shall be holden and exorcised until they expire by their own limitation, or he superseded by the authority of this Constitution, or laws made in pursuance thereof.

SEC. 12. The first general election for Governor, Lieutenant-Governor, and members of the Legislature, after the organization of the government, shall take place on the first Monday in November, one thousand eight hundred and forty-seven, and shall be held biennially thereafter, on the first Monday in November, until otherwise provided by the Legislature. And the Governor and Lieutenant-Governor, elected in December next, shall hold their offices until the installation in office of the Governor and Lieutenant-Governor to be elected in the year one thousand eight hundred and forty-seven.

[Section 13 is repealed by the secession of Texas.]

Done in Convention, by the Deputies of the people of Texas, at the City of Austin, this twenty-seventh day of August, in the year of our Lord one thousand eight hundred and forty-five.

In testimony whereof, we have hereunto subscribed our names.