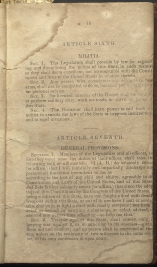 SEC. 1. Members of the legislature, and all officers, before they enter upon the duties of their offices, shall take the following oath or affirmation: "I (A. B.) do solemnly swear, (or affirm,) that I will faithfully and partially discharge and perform all the duties incumbent on me as ------, according to the best of my skill and ability, agreeably to the constitution and laws of the United States, and of this State; and I do further solemnly swear, (or affirm,) that since the adoption of this constitution by the Congress of the United States, I, being a citizen of this State, have not fought a duel with deadly weapons within this State, nor out of it; nor have I sent or accepted a challenge to fight a duel with deadly weapons; nor have I acted as second in carrying a challenge, or aided, advised, or assisted any person thus offending--so help me God."

SEC. 2. Treason against this State shall consist only in leying war against it, or in adhering to its enemies--giving them aid and comfort; and no person shall be convicted of treason unless on the testimony of two witnesses to the same overt act, or his own confession in open court.

SEC. 3. Every person shall be disqualified from holding any office of trust or profit in this State, who shall have been convicted of having given or offered a bribe to procure his election or appointment.

SEC. 4. Laws shall be made to exclude from office, serving on juries, and from the right of suffrage, those who shall hereafter be convicted of bribery, perjury, forger, or other high crimes. The privilege of free suffrage shall be supported by laws regulating elections, and prohibiting, under adequate penalties, all undue influence thereon from power, bribery, tumult, or other improper practice.

SEC. 5. Any citizen of this State who shall, after the adoption of this constitution, fight a duel with deadly weapons, either within the State of out of it, or who shall act as second, or knowingly aid and assist in any manner those thus offending, shall be deprived of holding any office of trust or profit under this State.

SEC. 7. The legislature shall provide by law for the compensation of all officers, servants, agents, and public contractors, not provided for by this constitution; and shall not grant extra compensation to any officer, agent, servant, or public contractor, after such public service shall have been performed, or contract entered into for performance of same; nor grant by appropriations or otherwise any amount of money out of the treasury of the State to any individual, on a claim real or pretended, where the same shall not have been provided for by preexisting law: Provided, That nothing in this section shall be so construed as to affect the claims of persons against the republic of Texas, heretofore existing.

SEC. 8. No money shall be drawn from the treasury but in pursuance of specific appropriations made by law; nor shall any appropriation of money be made for a longer term than two years, except for purposes of education; and no appropriation for private or individual purposes, or for purposes of internal improvement, shall be made without the concurrence of two-thirds of both houses of the legislature. A regular statement and account of the receipts and expenditures of all public money shall be published annually, in such manner as shall be prescribed by law. And in no case shall the legislature have the power to issue treasury warrants, treasury notes, or paper of any description intended to circulate as money.

SEC. 9. All civil officers shall reside within the State, and all district or county officers within their districts or counties; and shall keep their officers at such places therein as may be required by law.

SEC. 10. The duration of all offices not fixed by this constitution shall never exceed four years.

SEC. 11. Absence on the business of this State, or the United States, shall not forfeit a residence once obtained, so as to deprive any one of the right of suffrage, or of being elected or appointed to any office under the exceptions contained in this constitution.

SEC. 12. The legislature shall have power to provide for deductions from the salaries of public officers who may neglect the performance of any duty that may be assigned them by law.

SEC. 14. The legislature shall provide for a change of venue in civil and criminal cases, and for the erection of a penitentiary, at as early a day as practicable.

SEC. 15. It shall be the duty of the legislature to pass such laws as may be necessary and proper to decide differences by arbitration, when the parties shall elect that method of trial.

SEC. 16. Within five years after the adoption of this constitution, the laws, civil and criminal, shall be revised, digested, arranged, and published in such manner as the legislature shall direct; and a like revision, digest, and publication shall be made every ten years thereafter.

SEC. 17. No lottery shall be authorized by this State; and the buying or selling of lottery tickets within this State is prohibited.

SEC. 18. No divorce shall be granted by the legislature.

SEC. 21. All claims, locations, surveys, grants, and titles to land, which are declared null and void by the constitution of the republic of Texas, are and the same shall remain forever null and void.

SEC. 22. The legislature shall have power to protect by law, from forced sale, a certain portion of the property of all heads of families. The homestead of a family, not to exceed two hundred acres of land, (not included in a town or city, or any town or city lot or lots,) in value not to exceed two thousand dollars, shall not be subject to forced sale for any debts hereafter contracted; nor shall the owner, if a married man, be at liberty to alienate the same, unless by the consent of the wife, in such manner as the legislature may hereafter point out.

SEC. 23. The legislature shall provide in what cases officers shall continue to perform the duties of their offices, until their successors shall be duly qualified.

SEC. 24. Every law enacted by the legislature shall embrace but one object, and that shall be expressed in the title.

SEC. 25. No law shall be revised or amended by reference to its title; but in such case, the act revised, or section amended, shall be re-enacted and published at length.

SEC. 26. No person shall hold or exercise at the same time more than one civil office of emolument, except that of justice of the peace.

SEC. 27. Taxation shall be equal and uniform throughout the State. All property in this State shall be taxed in proportion to its value, to be ascertained as directed by law; except such property as two-thirds of both houses of the legislature may think proper to exempt from taxation. The legislature shall have power to lay an income tax, and to tax all persons pursuing any occupation, trade, or profession: Provided, That the term occupation shall not be construed to apply to pursuits either agricultural or mechanical.

SEC. 28. The legislature shall have power to provide by law for exempting from taxation two hundred and fifty dollars' worth of the household furniture, or other property belonging to each family in this State.

SEC. 29.The assessor and collector of taxes shall be appointed in such manner and under such regulations as the legislature may direct.

SEC. 30. No corporate body shall hereafter be created, renewed, or extended, with banking or discounting privileges.

SEC. 32. The legislature shall prohibit, by law, individuals from issuing bills, checks, promissory notes, or other paper, to circulate as money.

SEC. 33. The aggregate amount of debts hereafter contracted by the legislature shall never exceed the sum of one hundred thousand dollars, except in case of war, to repel invasions, or suppress insurrections; and in no case shall any amount be borrowed except by a vote of two-thirds of both houses of the legislature.

SEC. 34. The legislature shall, at the first session thereof, and may at any subsequent session, establish new counties for the convenience of the inhabitants of such new county or counties: Provided, That no new county shall be established which shall reduce the county or counties, or either of them, from which it shall be taken, to a less area than nine hundred square miles, (except the county of Bowie,) unless by consent of two-thirds of the legislature; nor shall any county be laid off of less contents. Every new county, as to the right of suffrage and representation, shall be considered as part of the county or counties from which it was taken, until entitled by numbers to the right of separate representation

SEC. 35. No soldier shall, in time of peace, be quartered in the house or within the enclosure of any individual, without the consent of the owner; nor in time of war, but in a manner prescribed by law.

SEC. 36. The salaries of the governor and judges of the supreme and district courts are hereby fixed at the minimum established in the constitution, and shall not be increased for ten years.

Mode of amending the Constitution. 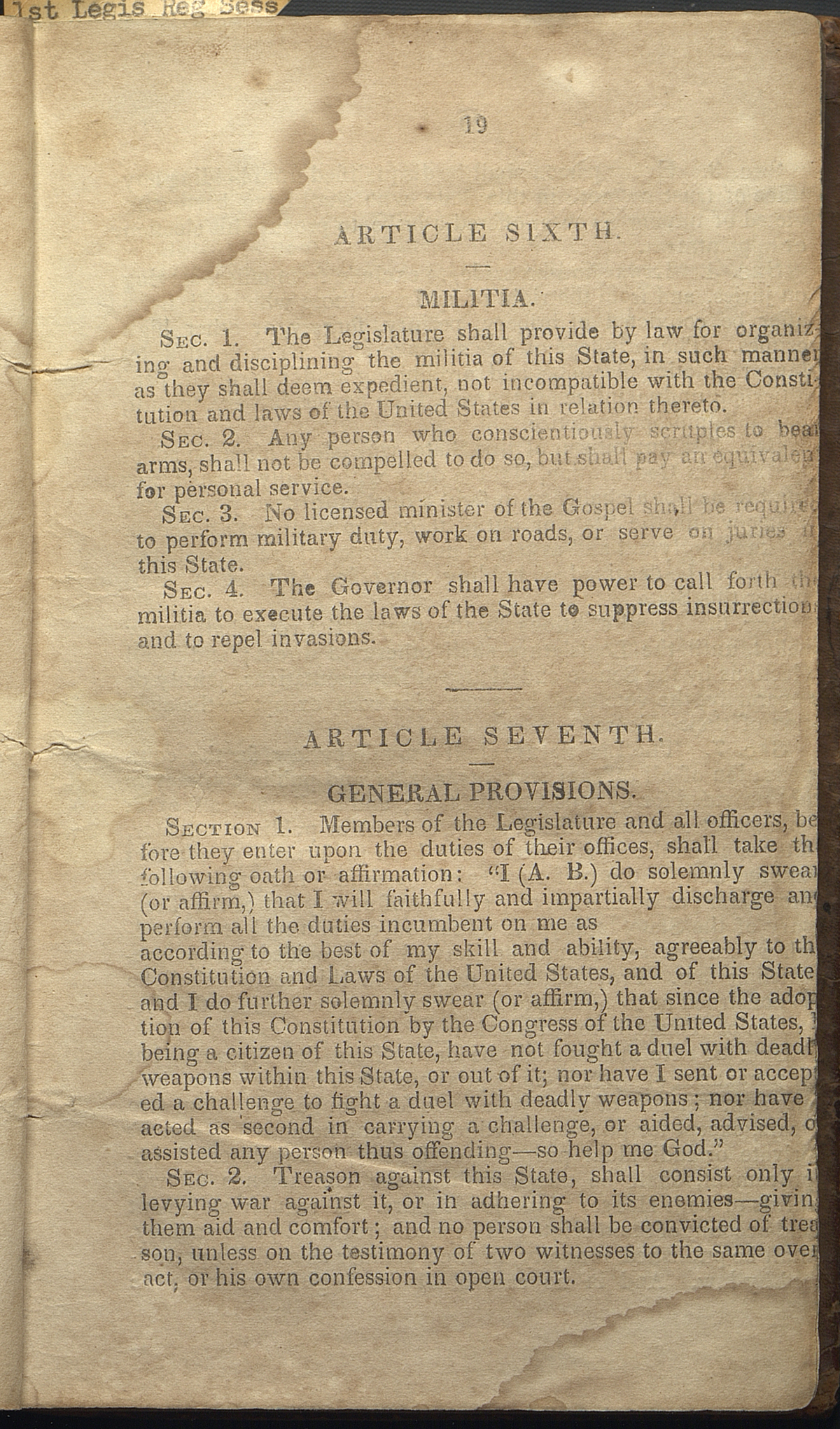 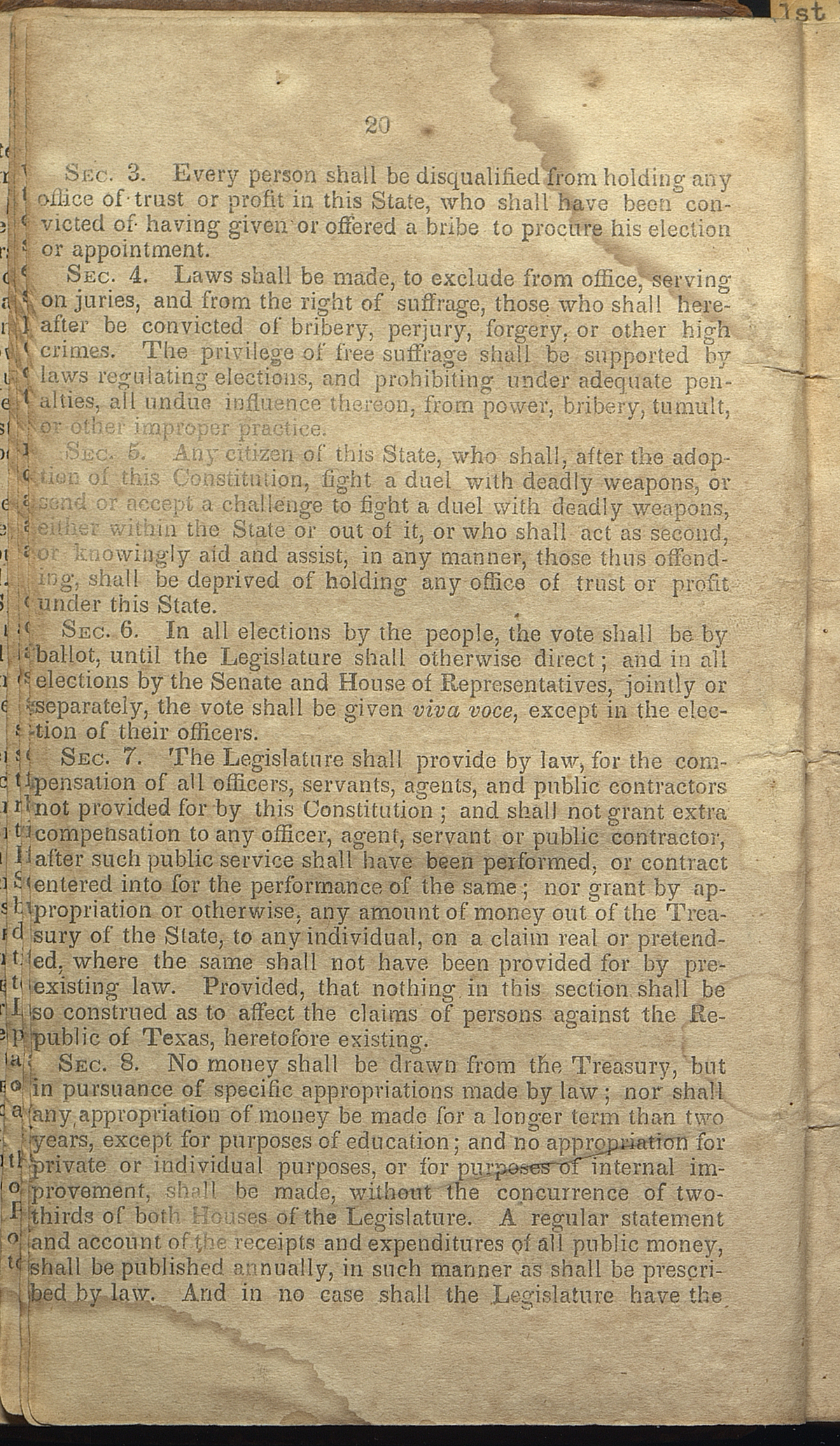 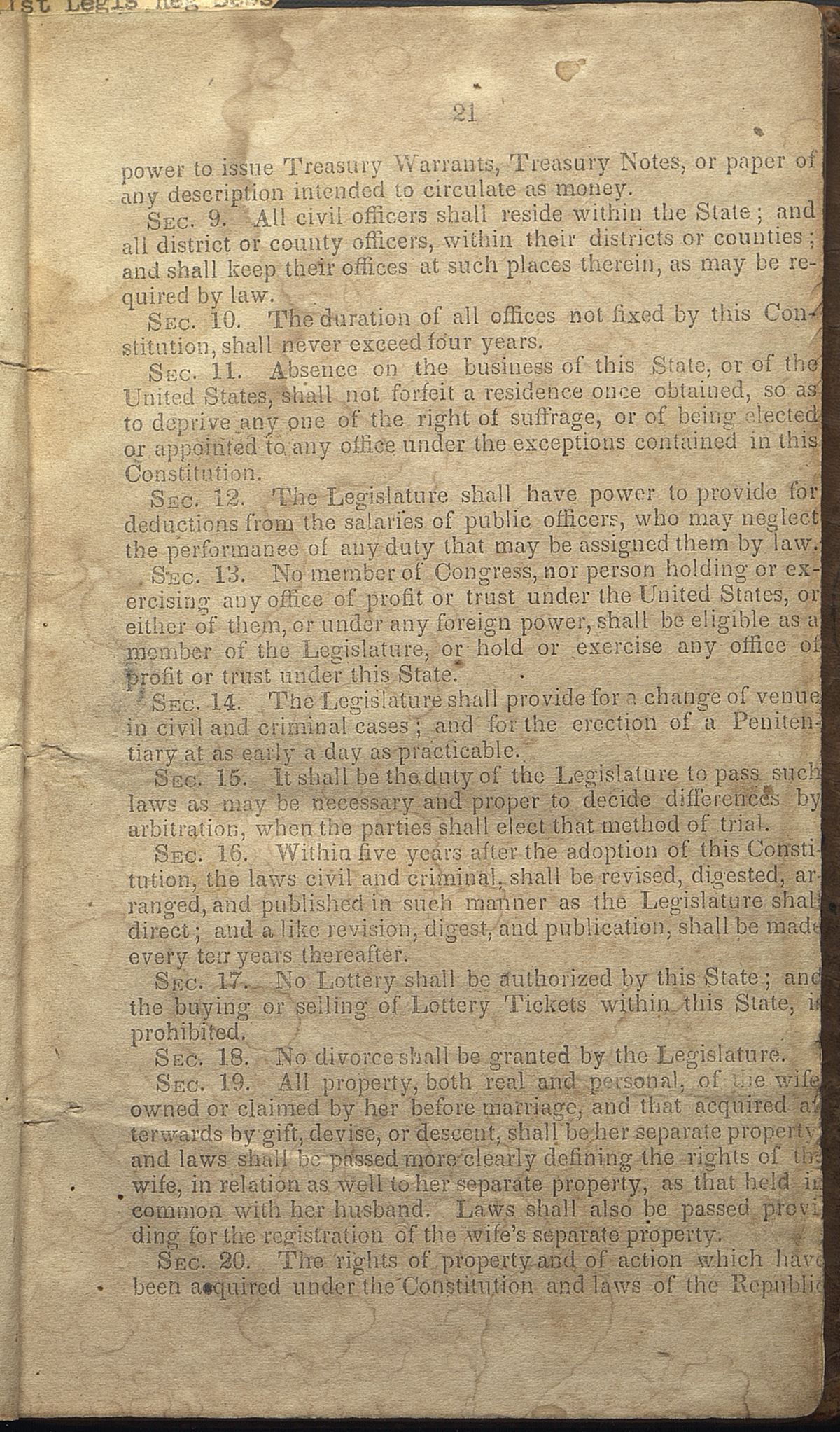 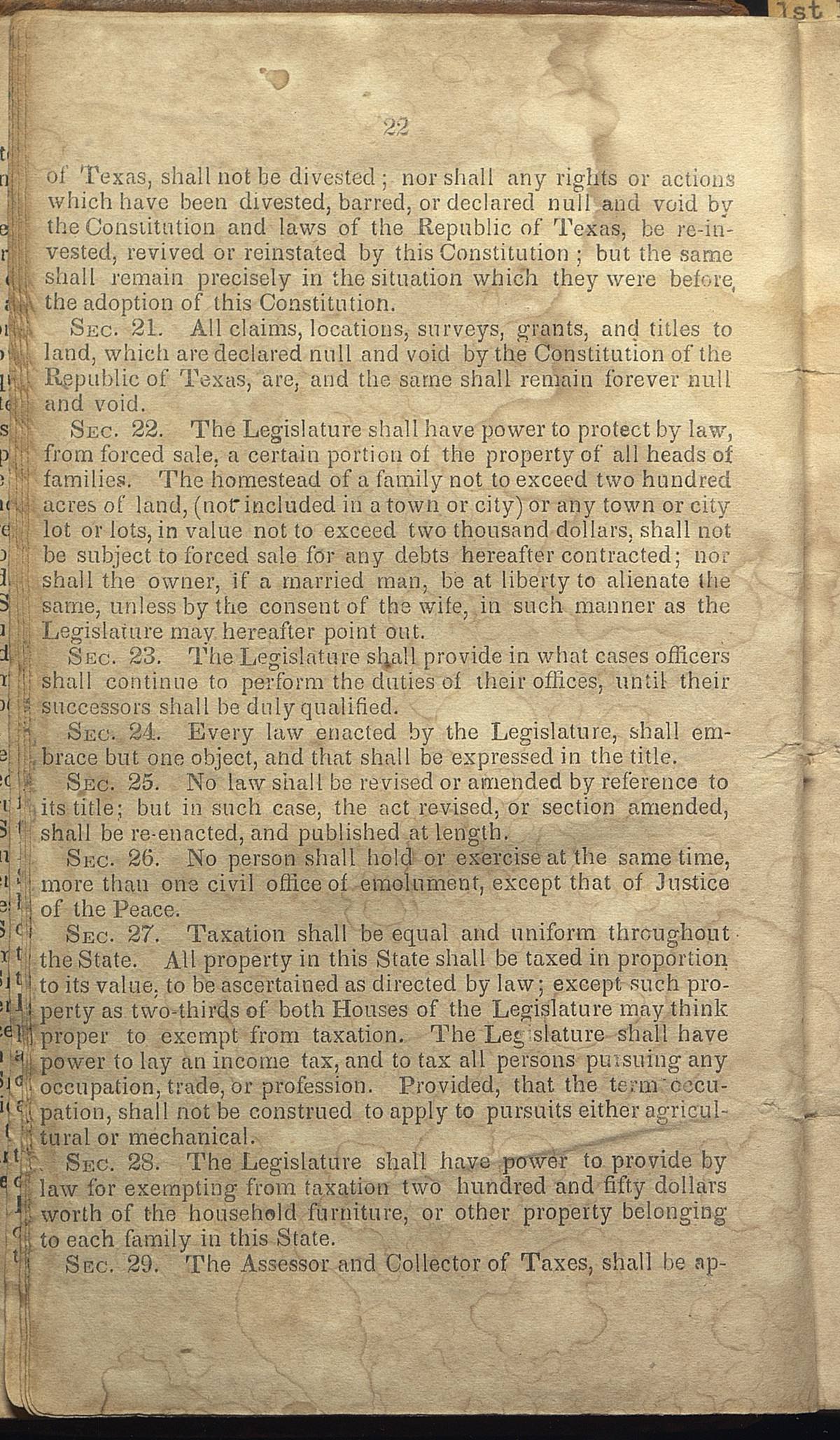 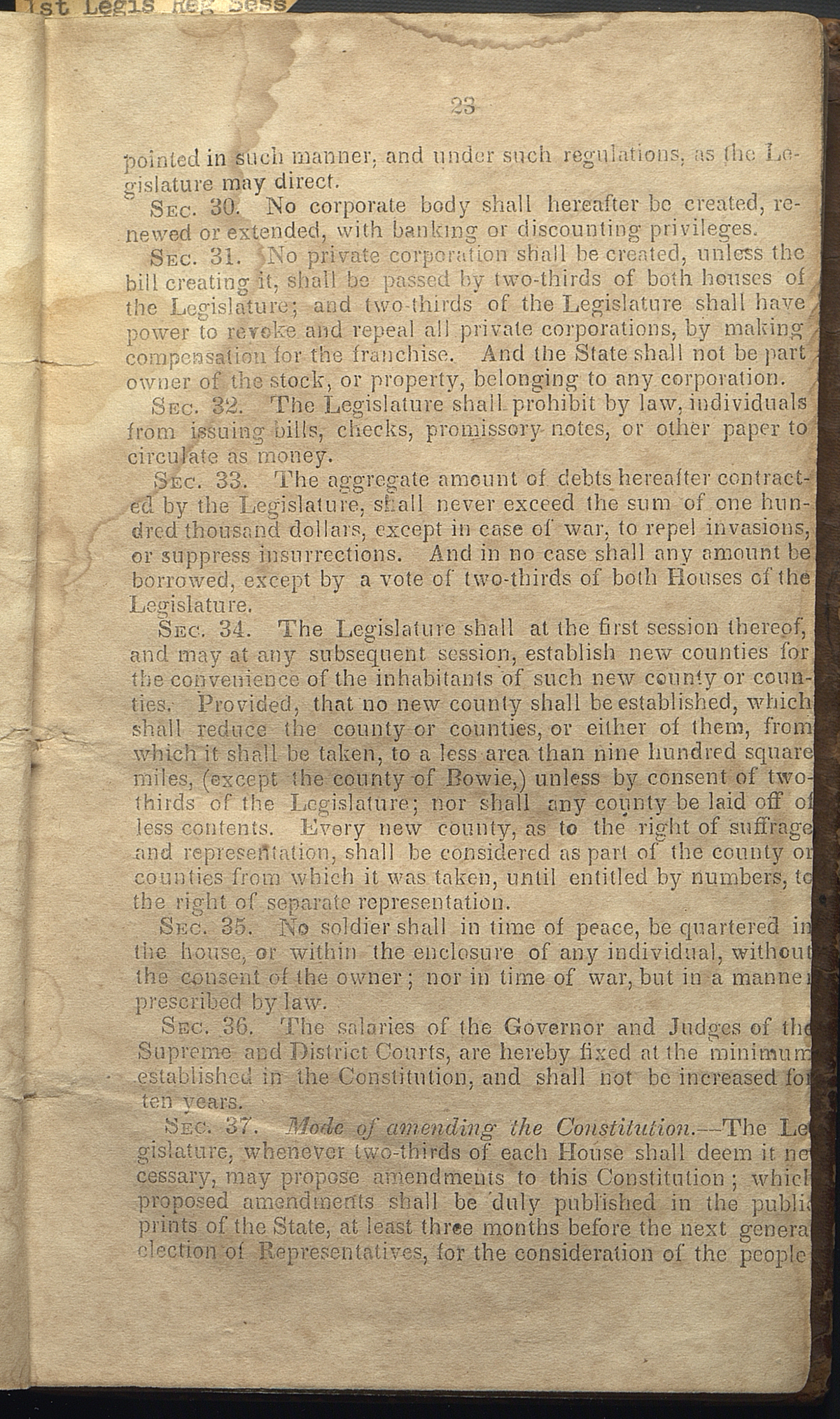 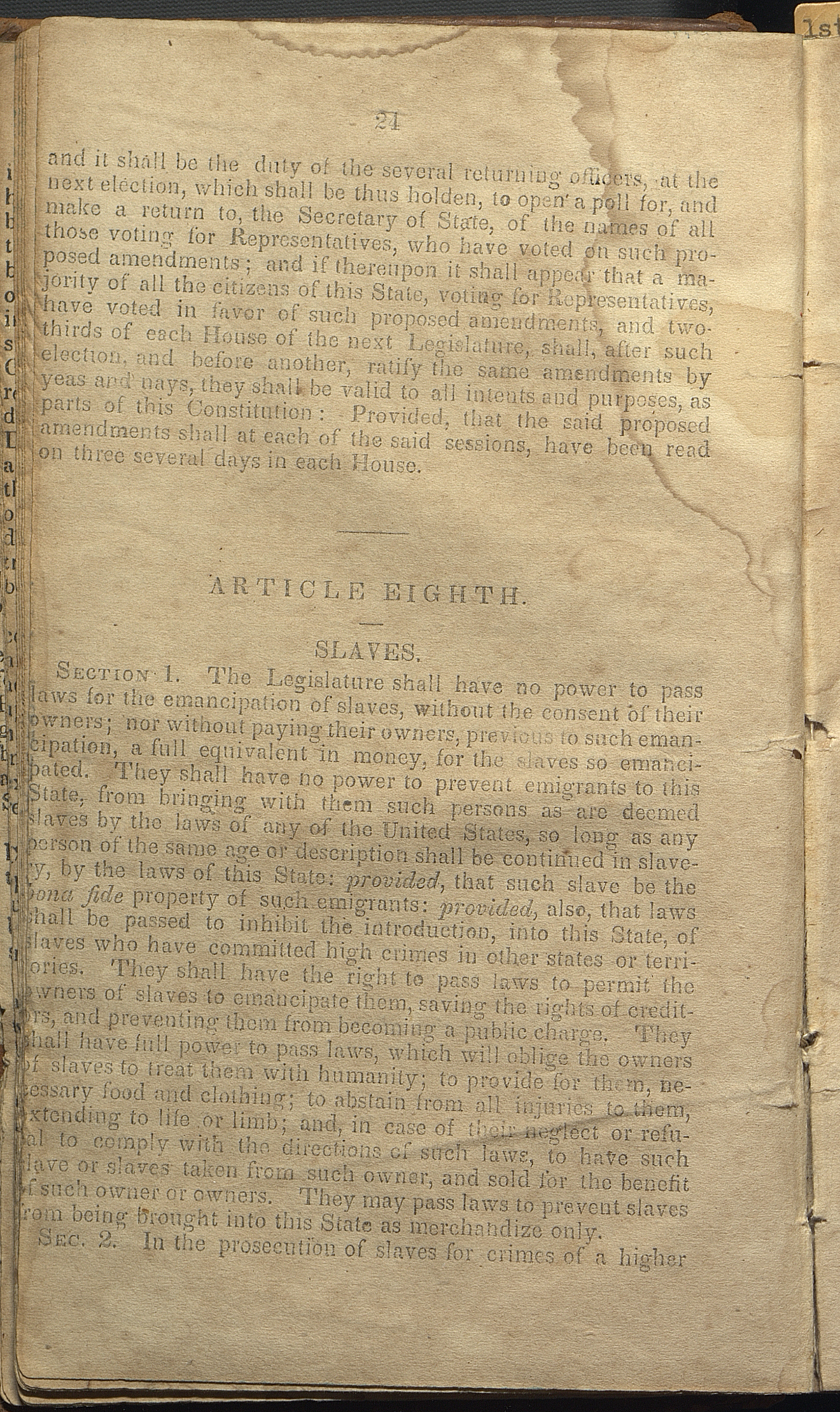