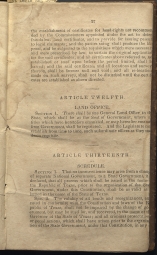 SEC. 3. All laws or parts of laws now in force in the republic of Texas, which are not repugnant to the constitution of the United States, the joint resolutions for annexing Texas to the United States, or to the provisions of this constitution, shall continue and remain in force as the laws of this State, until they expire by their own limitation, or shall be altered or repealed by the legislature thereof.

SEC. 4. All fines, penalties, forfeitures and escheats, which have accrued to the republic of Texas under the constitution and laws, shall accrue to the State of Texas; and the legislature shall, by law, provide a method for determining what lands may have been forfeiture or escheated.

SEC. 6. Upon the receipt of the said returns, or on the second Monday of November next, if the returns be not sooner made, it shall be the duty of the president, in presence of such officers of his cabinet as may be present, and of all persons who may choose to attend, to compare the votes given for the ratification or rejection of this constitution; and if it should appear from the returns that a majority of all the votes given is for the adoption of the constitution, then it shall be the duty of the president to make proclamation of that fact, and thenceforth this constitution shall be ordained and established as the constitution of the State, to go into operation and be of force and effect from and after the organization of the State government under this constitution; and the president of this republic is authorized and required to transmit to the President of the United States duplicate copies of this constitution, property authenticated, together with certified statements of the number of votes given for the ratification thereof, and the number for rejection; one of which copies shall be transmitted by mail, and one copy by special messenger, in sufficient time to reach the seat of government of the United States early in December next.

SEC. 7. Should this constitution be accepted by the people of Texas, it shall be the duty of the president, on or before the second Monday in November next, to issue his proclamation, directing and requiring elections to be holden in all the counties of this republic on the third Monday in December next, for the office of governor, lieutenant governor, and members of the Senate and House of Representatives of the State legislature, in accordance with the apportionment of representation directed by this constitution. The returns for members of the legislature of this State shall be made to the department of State of this republic; and those for governor and lieutenant governor shall be address to the speaker of the House of Representatives, endorsed "election returns of ---- county, for governor," and directed to the Department of State; and should, from any clause whatever, the chief justices of counties fail to cause to be holden any of the polls or elections provided for by this constitution, at the times and places herein directed, the people of the precincts where such failure exists are hereby authorized to choose managers, judges, and other officers, to conduct said elections.

SEC. 8. Immediately on the President of this republic receiving official information of the acceptance of this constitution by the Congress of the United States, he shall issue his proclamation convening, at an early day, the legislature of the State of Texas at the seat of government established under this constitution; and, after the said legislature shall have organized the speaker of the House of Representatives shall, in presence of both branches of the legislature, open the returns of the elections for governor and lieutenant governor, count and compare the votes, and declare the names of the persons who shall be elected to the offices of governor and lieutenant governor, who shall forthwith be installed in their respective offices; and the legislature shall proceed, as early as practicable, to elect senators to represent this State in the Senate of the United States; and also provide for the election of representatives to the Congress of the United States. The legislature shall also adopt such measures as may be required to cede to the United States, at the proper time, all public edifices, fortifications, barracks, ports, harbors, navy and navy yards, docks, magazines, arms and armaments, and all other property and means pertaining to the public defence, now belonging to the republic of Texas; and to make the necessary preparations for transferring to the said United States all custom-houses and other places for the collection of impost duties and other foreign revenues.

SEC. 9. It shall be the duty of the President of Texas, immediately after the inauguration of the governor, to deliver to him all records, public money, documents, archives, and public property of every description whatsoever, under the control of the executive branch of the government; and the governor shall dispose of the same in such manner as the legislature may direct.

SEC. 10. That no inconvenience may result from the change of government, it is declared that the laws of this republic relative to the duties of officers, both civil and military, of the same, shall remain in full force; and the duties of their several offices shall be performed in conformity with the existing laws, until the organization of the government of the State under this constitution, or until the first day of the meeting of the legislature; that then, the offices of President, Vice President, of the President's cabinet, foreign ministers, charges, and agents and others repugnant to this constitution, shall be superseded by the same; and that all others shall be holden and exercised until they expire by their own limitation, or be superseded by the authority of this constitution, or laws made in pursuance thereof.

SEC. 12. The first general election for governor, lieutenant governor, and members of the legislature, after the organization of the government, shall take place on the first Monday in November, one thousand eight hundred and forty-seven, and shall be held biennially thereafter on the first Monday in November, until otherwise provided by the legislature; and the governor and lieutenant-governor elected in December next shall hold their offices until the installation in office of the governor and lieutenant-governor to be elected in the year one thousand eight hundred and forty-seven.

SEC. 13. The ordinance passed by the convention on the fourth day of July, assenting to the overtures for the annexation of Texas to the United States, shall be attached to this constitution and form a part of the same.

Done in convention by the deputies of the people of Texas, at the city of Austin, this twenty-seventh day of August, in the year of our Lord one thousand eight hundred and forty-five.

In testimony whereof we have hereunto subscribed our names.