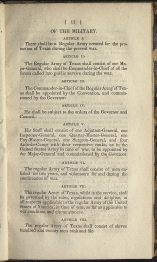 There shall be a Regular Army created for the protection of Texas during the present war.

The Regular Army of Texas shall consist of one Major-General, who shall be Commander-in-Chief of all forces called into public service during the war.

The Commander-in-Chief of the Regular Army of Texas shall be appointed by the Convention, and commissioned by the Governor.

He shall be subject to the orders of the Governor and Council.

The regular Army of Texas shall consist of men enlisted for two years, and volunteers for and during the continuance of war.

The regular Army of Texas shall consist of eleven hundred and twenty men rank and file.

There shall be a corps of Rangers under the command of a Major, to consist of one hundred and fifty men, to be divided into three or more detachments, and which shall compose a battalion, under the Commander-in-Chief when in the field.

The Militia of Texas shall be organized as follows: all able bodied men over sixteen, and under fifty years of age, shall be subject to Militia duty.

Every inhabitant of Texas, coming within purview of the preceding article shall, on the third Monday of December next, or as soon thereafter as practicable, assemble at each precinct of their municipality and proceed to elect one captain, one first lieutenant, and one second lieutenant to every fifty-six men.

When said election shall have taken place, the judges shall certify to the Governor, forthwith the names of the respective officers elected, who shall, as soon as practicable, make out and sign, and transmit commissions for the same; that if there shall be found to exist any municipality, more than three Companies, the captain, or commandants on giving due notice thereof shall call together the subalterns of said Companies, and proceed to elect one Major; if of four Companies, one Lieutenant Colonel; if of five or more Companies, one Colonel, for the command of said Companies, which shall constitute a regiment of said municipality; that if there shall be found to exist more than one regiment in said municipality, the whole number of field and Company officers, shall on due notice proceed to elect a Brigadier-General, out of their number who shall command the whole Militia in said municipality.

Of the Military, Articles I-VIII

Of the Military, Articles IX-XII

Of the Military, last page