Declaration of the People of Texas in General Convention Assembled (1836) 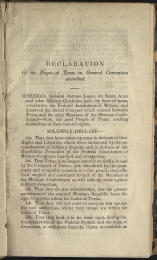 Of the People of Texas in General Convention assembled.

WHEREAS, General Antonio Lopez de Santa Anna and other Military Chieftains have, by force of arms, overthrown the Federal Institutions of Mexico, and dissolved the Social Compact which existed between Texas and other Members of the Mexican Confederacy--Now, the good People of Texas, availing themselves of their natural rights,

1st. That they have taken up arms in defence of their Rights and Liberties, which were threatened by the encroachments of military despots, and in defense of the Republican Principles of the Federal Constitution of Mexico of eighteen hundred and twenty-four.

2d. That Texas is no longer, morally or civilly, bound by the Compact of Union; yet, stimulated by the generosity and sympathy common to a free people, they offer their support and assistance to such of the Members of the Mexican Confederacy as will take up arms against military despotism.

3d. That they do not acknowledge, that the present authorities of the nominal Mexican Republic have the right to govern within the limits of Texas.

4th. That they will not cease to carry on war against the said authorities, whilst their troops are within the limits of Texas.

5th. That they hold it to be their right, during the disorganization of the Federal System and the reign of despotism, to withdraw from the Union, to establish an independent Government, or to adopt such measures as they may deem best calculated to protect their rights and liberties; but that they will continue faithful to the Mexican Government so long as that nation is governed by the Constitution and Laws that were formed for the government of the Political Association.

6th. That Texas is responsible for the expenses of her Armies now in the field.

7th. That the public faith of Texas is pledged for the payment of any debts contracted by her Agents.

8th. That she will reward by donations in Land, all who volunteer their services in her present struggle, and received them as Citizens.

These Declarations we solemnly avow to the world, and call GOD to witness their truth and sincerity; and invoke defeat and disgrace upon our heads, should we prove guilty of duplicity.