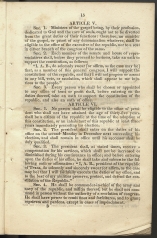 SEC. 1. No person shall be eligible to the office of President who shall not have attained the age of thirty-five years, shall be a citizen of the Republic at the time of the adoption of this Constitution, or an inhabitant of this Republic at least three years immediately preceding his election.

SEC. 2. The President shall enter on the duties of his office on the second Monday in December next succeeding his election, and shall remain in office until his successor shall be duly qualified.

SEC. 3. The President shall, at stated times, receive a compensation for his services, which shall not be increased or diminished during his continuance in office; and before entering upon the duties of his office, he shall take and subscribe the following oath or affirmation: "I, A. B., President of the Republic of Texas, do solemnly and sincerely swear [or affirm, as the case may be] that I will faithfully execute the duties of my office, and to the best of my ability preserve, protect, and defend the Constitution of the Republic.

SEC. 4. He shall be commander-in-chief of the army and navy of the Republic, and the militia thereof, but he shall not command in person without the authority of a resolution of Congress. He shall have power to remit fines and forfeitures, to grant reprieves and pardons, except in cases of impeachment.

SEC. 5. He shall, with the advice and consent of two-thirds of the Senate, make treaties; and with the consent of the Senate, appoint ministers and consuls, and all officers whose offices are established by the Constitution, not herein otherwise provided for.

SEC. 7. He shall from time to time give Congress information of the state of the Republic, and recommend for their consideration such measures as he may deem necessary. He may, upon extraordinary occasions, convene both Houses, or either of them. In the event of a disagreement as to the time of adjournment, he may adjourn them to such time as he may think proper. He shall receive all foreign ministers. He shall see that the laws be faithfully executed, and shall commission all the officers of the Republic.

SEC. 9. All grants and commissions shall be in the name and by the authority of the Republic of Texas, shall be sealed with the great seal, and signed by the President.

SEC. 11. Every citizen of the Republic who has attained the age of twenty-one years, and shall have resided six months within the district or county where the election is held, shall be entitled to vote for members of the General Congress.

SEC. 12. All elections shall be by ballot, unless Congress shall otherwise direct.

SEC. 13. All elections by joint vote of both Houses of Congress shall be viva voce, shall be entered on the journals, and a majority of all the votes shall be necessary to a choice.

SEC. 15. In cases of impeachment, removal from office, death, resignation, or absence of the President from the Republic, the Vice President shall exercise the powers and discharge the duties of the President until a successor be duly qualified, or until the President, who may be absent or impeached, shall return or be acquitted.

SEC. 16. The President, Vice President, and all civil officers of the Republic, shall be removable from office by impeachment for, and on conviction of, treason, bribery, and other high crimes and misdemeanors.