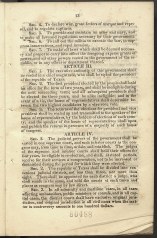 SEC. 1. The Judicial powers of the Government shall be vested in one Supreme Court, and such inferior courts as the Congress may, from time to time, ordain and establish. The judges of the supreme and inferior courts shall hold their offices for four years, be eligible to re-election, and shall, at stated periods, receive for their services a compensation, not to be increased or diminished during the period for which they were elected.

SEC. 2. The Republic of Texas shall be divided into convenient judicial districts, not less than three, nor more than eight. There shall be appointed for each district, a judge, who shall reside in the same, and hold the courts at such times and places as Congress may by law direct.

SEC. 3. In all admiralty and maritime cases, in all cases affecting ambassadors, public ministers, or consuls, and in all capital cases when the matter in controversy amounts to one hundred dollars.

SEC. 4. The judges, by virtue of their offices, shall be conservators of the peace, throughout the Republic. The style of all process shall be, "The Republic of Texas;" and all prosecutions shall be carried on in the name and by the authority of the same, and conclude, "Against the peace and dignity of the Republic."

SEC. 5. There shall be a district attorney appointed for each district, whose duties, salaries, perquisites, and terms of service shall be fixed by law.

SEC. 6. The clerks of the district courts shall be elected by the qualified voters for members of Congress in the counties where the courts are established, and shall hold their offices for four years, subject to removal by presentment of a grand jury, and convictions of a petit jury.

SEC. 8. The Supreme Court shall have appellate jurisdiction only, which shall be conclusive, within the limits of the Republic; and shall hold it sessions annually at such times and places as may be fixed by law; provided that no judge shall sit in a case in the Supreme Court tried by him in the court below.

SEC. 9. The judges of the supreme and district courts shall be elected by joint ballot of both Houses of Congress.

SEC. 10. There shall be, in each county, a county court, and such justices' courts as the Congress may from time to time establish.

SEC. 11. The Republic shall be divided into convenient counties, but no new county shall be established, unless it be done on the petition of one hundred free male inhabitants of the territory sought to be laid off and established, and unless the said territory shall contain nine hundred square miles.

SEC. 12. There shall be appointed, for each county, a convenient number of justices of the peace, one sheriff, one coroner, and a sufficient number of constables, who shall hold their offices for two years, to be elected by the qualified voters of the district or county, as Congress may direct. Justices of the peace and sheriffs shall be commissioned by the President.

SEC. 13. The Congress shall, as early as practicable, introduce, by statute, the common law of England, with such modifications as our circumstances, in their judgment, may require; and in all criminal cases the common law shall be the rule of decision.