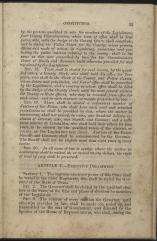 SECTION 1. The supreme executive power of this State shall be vested in the Chief Magistrate, who shall be styled the Governor of the State of Texas.

SEC. 2. The Governor shall be elected by the qualified electors of the State, at the time and places of elections for members of the Legislature.

SEC. 4. The Governor shall hold his office for the term of four years from the regular time of installation, and until his successor shall be duly qualified; but shall not be eligible for more than eight years in any term of twelve years; he shall be at least thirty years of age, shall be a citizen of the United States, or a citizen of the State of Texas at the time of the adoption of this Constitution, and shall have resided in the same six years immediately preceding his election, and shall be inaugurated on the first Thursday after the organization of the Legislature, or as soon thereafter as practicable.

SEC. 5. He shall, at stated times, receive a compensation for his services, which shall not be increased or diminished during the term for which he may have been elected. He shall receive an annual salary of four thousand dollars, until otherwise provided by law.

SEC. 6. The Governor shall be commander-in-chief of the army and navy of this State, and of the militia, except when they shall be called into the service of the United States.

SEC. 8. He may, by proclamation, on extraordinary occasions, convene the Legislature at the seat of government, or at a different place, if that should be dangerous by reason of disease or the public enemy. In case of disagreement between the two Houses, with respect to adjournment, he may adjourn them to such time as he shall think proper, not beyond the day of the next regular meeting of the Legislature.

SEC. 9. He shall, from time to time, give to the Legislature information, in writing, of the State of the Government, and recommend to their consideration such measures as he may deem expedient.

SEC. 14. There shall be a seal of the State, which shall be kept by the Governor, and used by him officially. The said seal shall be a star of five points, encircled by an olive and live oak branches, and the words "The State of Texas."

SEC. 15. All commissions shall be in the name and by the authority of the State of Texas, be sealed with the state seal, signed by the Governor, and attested by the Secretary of State.

SEC. 16. There shall be a Secretary of State, who shall be appointed by the Governor, by and with the advice and consent of the Senate, and shall continue in office during the term of service of the Governor elect. He shall keep a fair register of all official acts and proceedings of the Governor, and shall, when required, lay the same, and all papers, minutes and vouchers relative thereto, before the Legislature, or either House thereof, and shall perform such other duties as may be required of him by law.

SEC. 17. Every bill which shall have passed both Houses of Legislature, shall be presented to the Governor; if he approve, he shall sign it; but if not, he shall return it with his objections to the House in which it shall have originated, who shall enter the objections at large upon the journals, and proceed to reconsider it. If, after such reconsideration, two-thirds of the members present shall agree to pass the bill, it shall be sent, with the objections, to the other House, by which it shall likewise be reconsidered. If approved by two-thirds of the members present of that House, it shall become a law; but in such cases, the votes of both Houses shall be determined by yeas and nays, and the names of the members voting for or against the bill shall be entered on the journals of each House, respectively; if any bill shall not be returned by the Governor within five days, Sundays excepted, after it shall have been presented to him, the same shall be a law, in like manner as if he had signed it. Every bill presented to the Governor one day previous to the adjournment of the Legislature, and not returned to the House in which it originated before its adjournment, shall become a law, and have the same force and effect as if signed by the Governor. The Governor may approve any appropriation, and disapprove any other appropriation in the same bill. In such case, he shall, in signing the bill, designate the appropriations disapproval, and shall return a copy of such appropriations, with his objections, to the House in which the bill shall have originated; and the same proceedings shall then be had as in the case of other bills disapproved by the Governor; but if the Legislature has adjourned before the bill is returned to the House, he shall return the same to the Secretary of State, with his objections, and also to the next session of the Legislature.

SEC. 18. Every order, resolution, or vote, to which the concurrence of both Houses of the Legislature may be necessary, except on questions of adjournment, shall be presented to the Governor, and before it shall take effect, be approved by him, or, being disapproved, shall be repassed by both Houses according to the rules and limitations prescribed in the case of a bill.

SEC. 19. The Governor, by and with the advice and consent of two-thirds of the Senate, shall appoint a convenient number of Notaries Public, not exceeding six for each county; who, in addition to such duties as are prescribed by law, shall discharge such other duties as the Legislature may from time to time prescribe.

SEC. 21. The Governor shall reside during the session of the Legislature at the place where the session may be held, and at all other times whatever, in their opinion, the public good may require.

SEC. 22. No person holding the office of Governor shall hold any other office or commission, civil or military.

SEC. 23. There shall be elected by the qualified electors of this State, in the manner prescribed by law, a Comptroller of Public Accounts and a State Treasurer, each of whom shall hold his office for the term of four years; and in case of a vacancy in either of said offices, the Governor shall have power to fill the same by appointment, which shall continue in force until the office can be filled at the next general election for State and county officers, and the successor duly qualified. 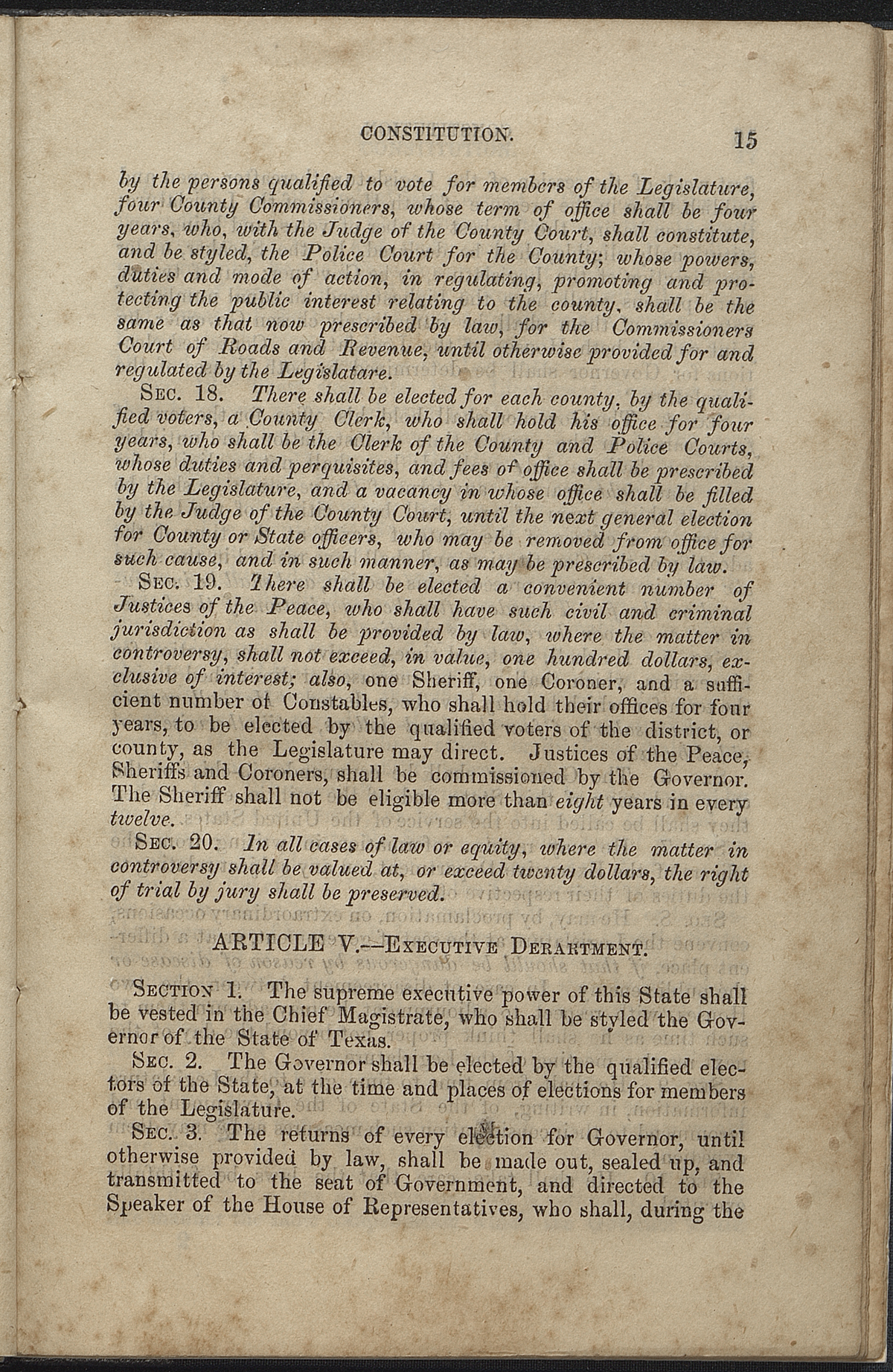 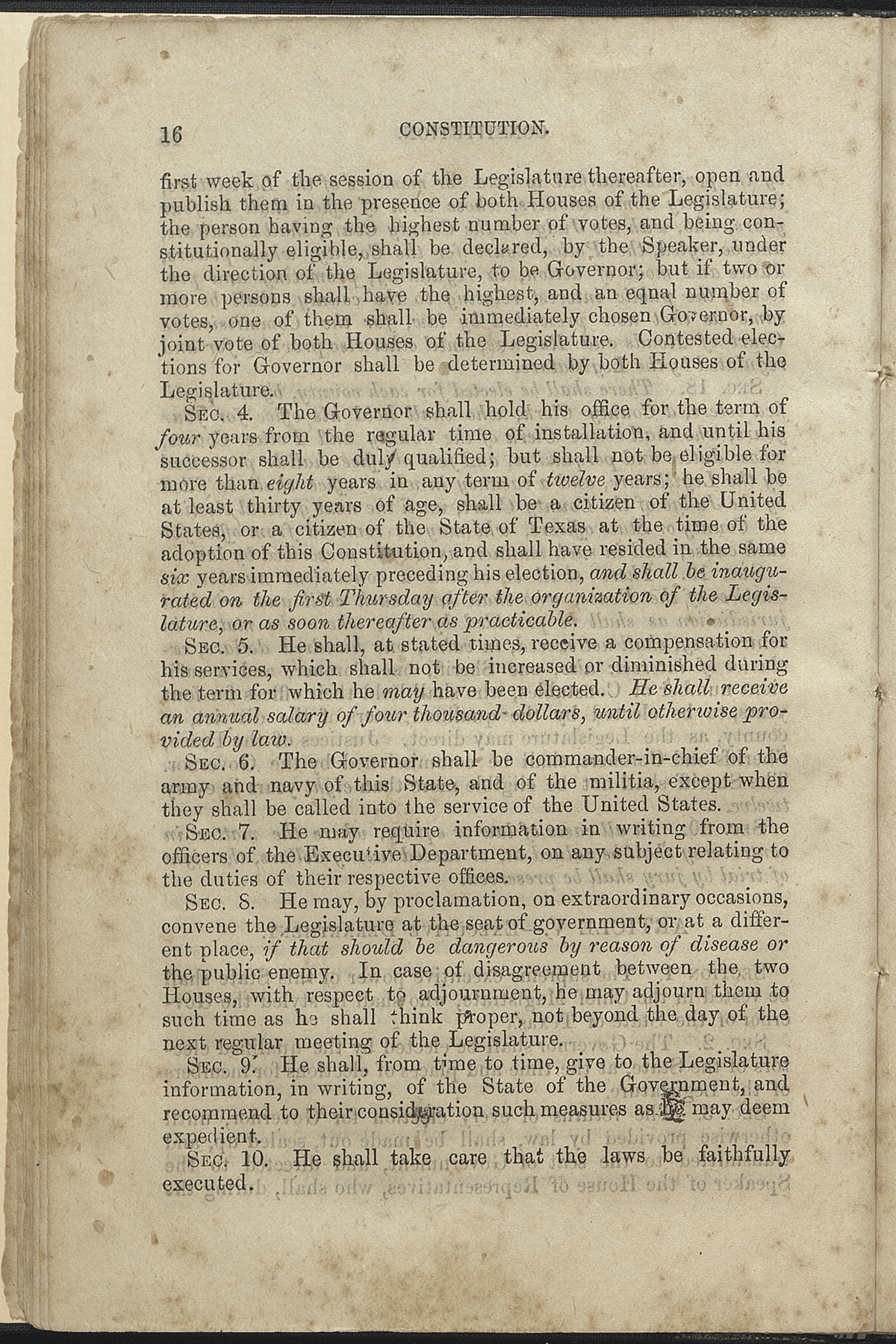 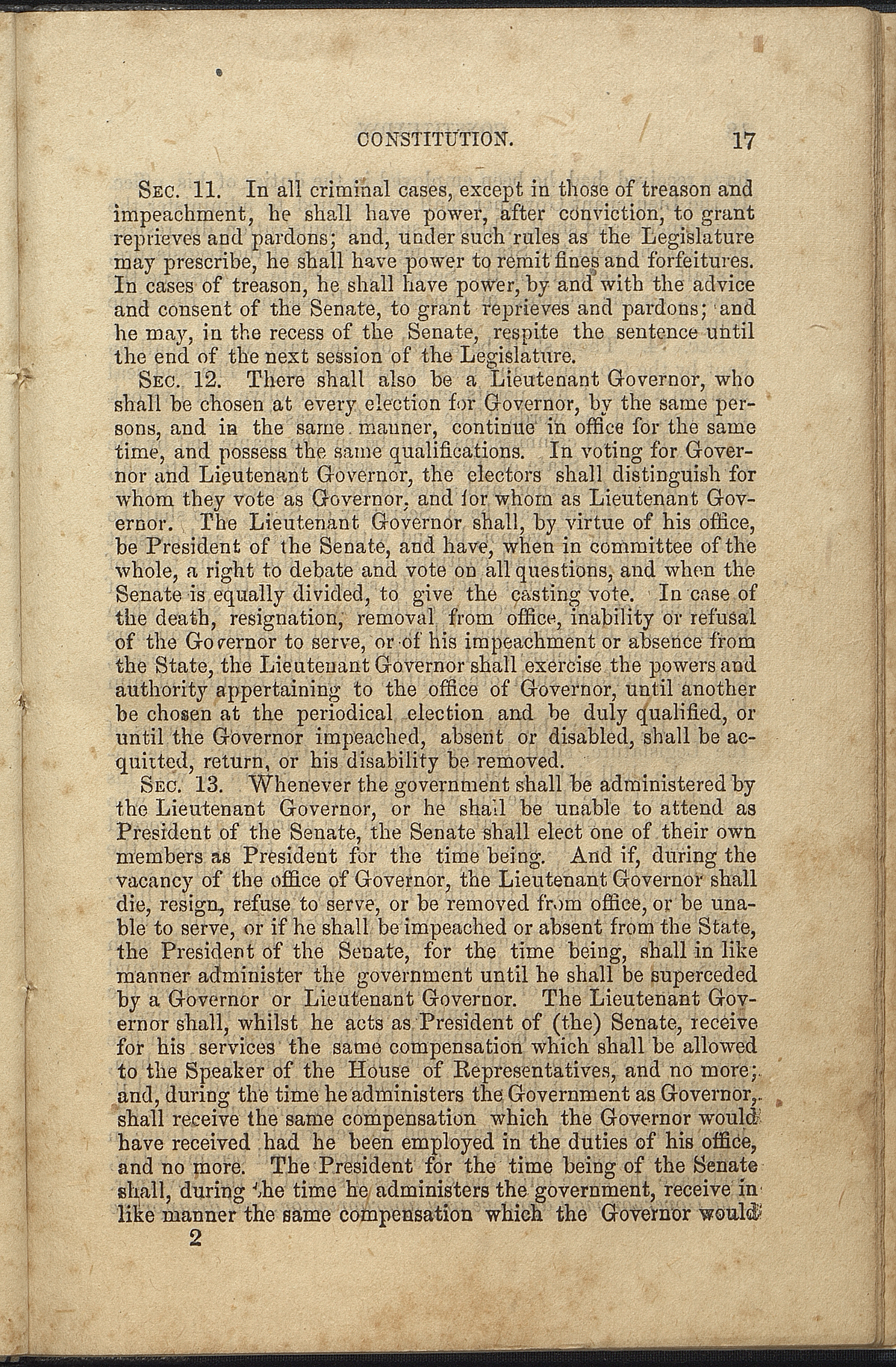 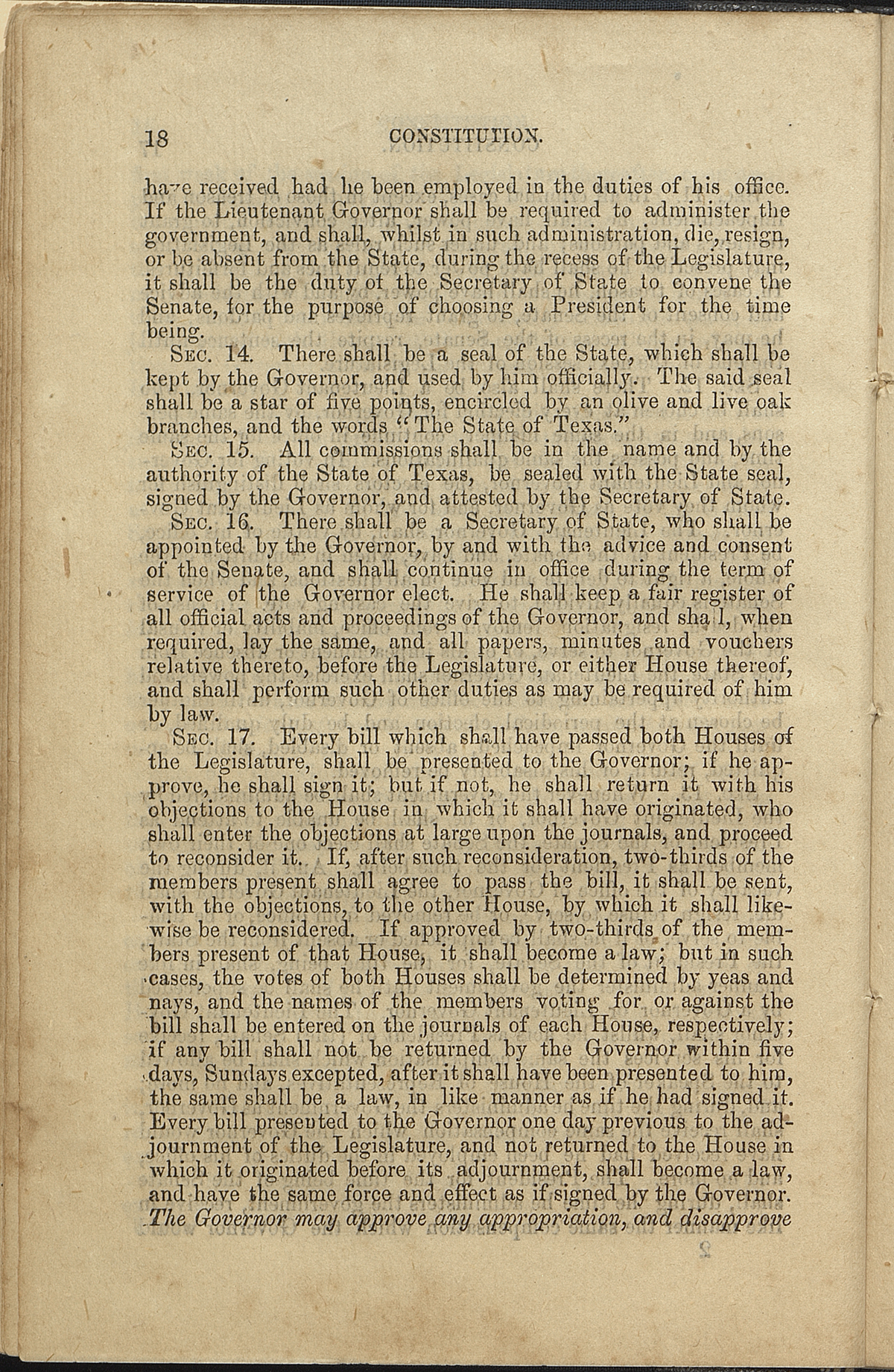 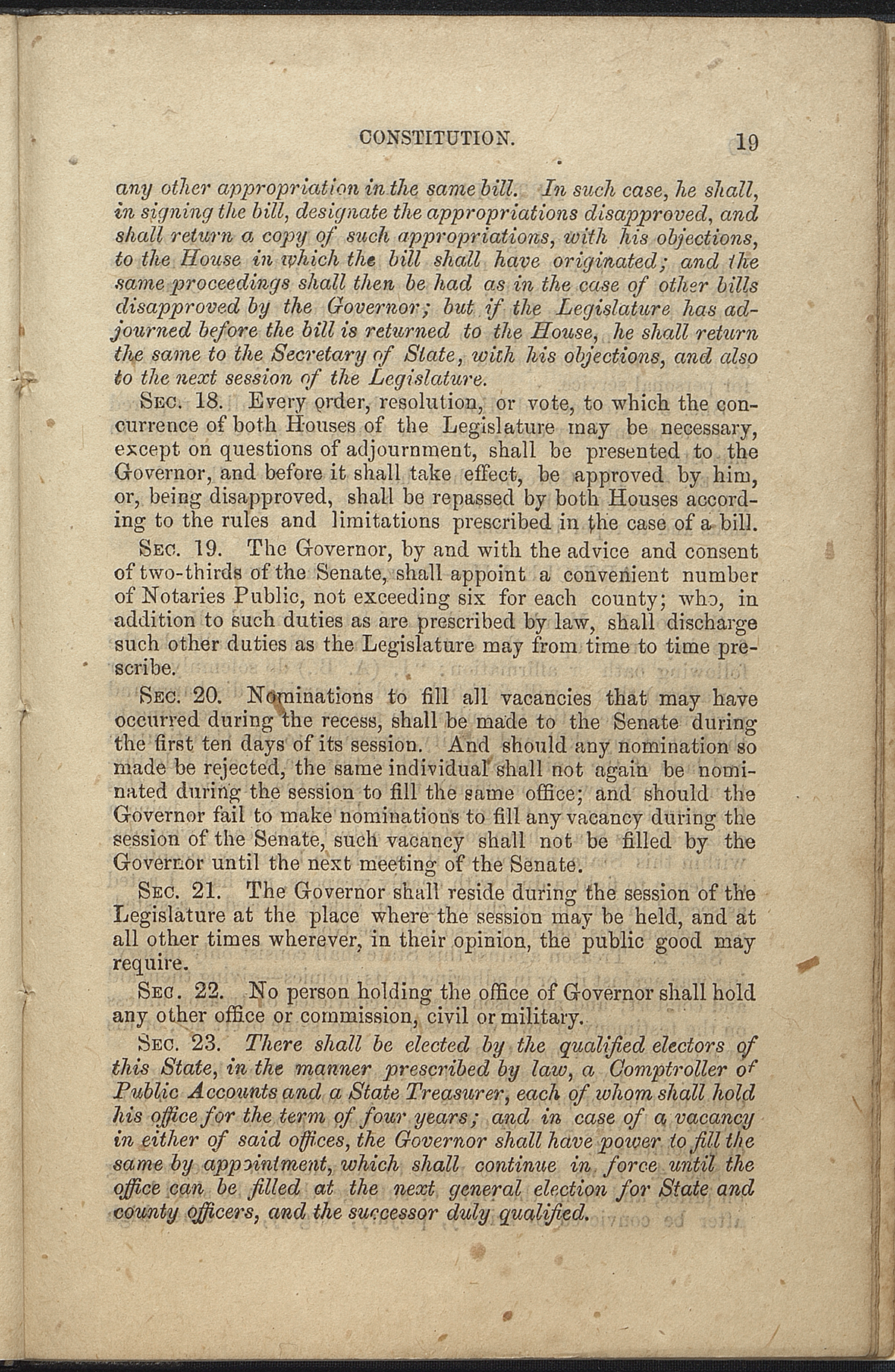